Government to import rice to ensure sufficient stockpile for the country

He said the stockpile may not be sufficient at the moment and although the country could import rice later, it was better to do so now.

“Firstly the price of rice may increase in the future and secondly the parties that want to export to our country may not do so in the future as they may need the staple diet for their citizens.

“This is one issue Agriculture and Agro-based Industry Minister Datuk Mustapa Mohamed must pay immediate attention to. He must ensure that there is enough food stockpile in the country,” he told reporters after opening the Fifth Malaysia International Halal Showcase (Mihas 2008) at the Matrade Exhibition and Convention Centre here yesterday. 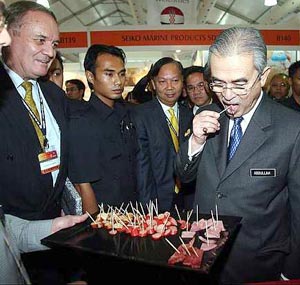 Great taste: Abdullah trying halal sausages at one of the booths after launching the Fifth MalaysiaInternational Halal Showcase at the Matrade Exhibition and Convention Centre in Kuala Lumpur yesterday.

Abdullah was asked to respond to a news wire report that Thailand would provide 500,000 tonnes of rice to Malaysia as an emergency purchase as the latter’s stockpile could only last 15 days.

On Karpal Singh’s views against the reinstatement of Perak Religious Department director Datuk Jamry Sury, Abdullah his statements had angered many people.

“They imply the Sultan does not know his duties.

“That’s why many Malaysians, including Umno members and non-Muslims, have lodged police reports.

“I instructed Umno secretary-general Datuk Seri Tengku Adnan Tengku Mansor to lodge a police report so the matter can be taken to the Attorney-General, and then to court,” he added.

On the sedition charge against Malaysia Today editor Raja Petra Raja Kamarudin, Abdullah said action would be taken if anyone broke the country’s laws.

On the proposed toll review, he said although Works Minister Datuk Mohd Zin Mohamed wanted to reduce the toll rate, the suggestion had to be brought to the Cabinet before a decision was made.

On the water seepage at the Parliament lobby, Abdullah said: “Bocor lagi (leaking again), what is there to comment, repair it fast.”

On Mihas 2008, which has 500 local and foreign exhibitors, Abdullah said he was happy that exhibitors were growing in numbers.

“Since Wednesday a total of RM159mil has been collected in terms of sales and the figure is expected to hit RM2.08bil when the showcase comes to an end in a few days' time,” he added.

Present at the event was Penang Chief Minister Lim Guan Eng who was invited by the organisers.