Rex cinema-turned-hostel damaged but no one hurt

KUALA LUMPUR: Backpackers fled their beds and watched helplessly as fire damaged the Red Dragon hostel, which was once the landmark Rex cinema, in Jalan Sultan.

When the fire broke out at 8.30am yesterday, about 50 backpackers in the hostel were either sleeping or resting in rooms partitioned by gypsum boards. No one was injured.

Many of them watched helplessly as the fire destroyed their belongings.

The fire is believed to have started on the first floor of the three-story building with about 35 “rooms.”

Five fire engines with 28 firemen from Jalan Hang Tuah, Chow Kit and Pudu rushed to the scene after the Fire and Rescue Department (FRD) received a call at 8.50am.

Hang Tuah FRD assistant operations director Md Ali Ismail said they took one-and-a-half hours to put out the blaze. He said the cause of the fire had yet to be determined.

Singaporean tourist Noel Kong said he was sleeping when he smelt something burning and felt the heat of the fire. The light bulb above him suddenly turned orange and fell off.

“I ran out from my partition and shouted to alert other backpackers who might not have realised there was a fire,” he said.

Interestingly, the original Rex Theatre, operated by the Shaw brothers, burned down in the early 1970s and was taken over by Golden Screen Cinemas (GSC), which rebuilt it as GSC Rex KL and commenced business in 1976.

It boasted a large seating capacity and had the distinction of being the first cinema in Malaysia to install digital sound processors in 1993 for the blockbuster Jurassic Park.

After more than 25 years in operation, GSC Rex KL closed its doors on Nov 15, 2002. It was then turned into a hostel for backpackers. 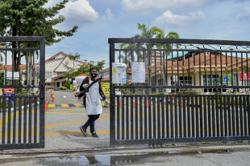