Siti Rahmah Azman Subramaniam told the High Court yesterday that she did not tell him that her boyfriend, who wanted to get Bakarudin to stop calling her, would be with her.

She said Bakarudin began calling her after she “bumped” into him and his two friends at Taipan Club, Subang Jaya, in early February 2002.

She asked him to help reinstate her in UiTM as she left the university in 2001 because she had failed a particular subject thrice.

She was a student there in 1999 and had majored in Sports Science and Recreation.

She said she accompanied Bakarudin and his friends into a karaoke room but left an hour later as “they were behaving indecently towards me.”

She said she later complained to her boyfriend about the men’s behaviour.

She said Bakarudin called her the next day and offered to help her if she slept with him.

She said she was shocked and angry and refused Bakarudin’s proposition.

Siti Rahmah, 23, now a corporate planner with Global Certification Sdn Bhd, was testifying at the trial of four men accused of murdering Bakarudin in Subang Jaya at 9.30pm on Feb 12, 2002.

The charred remains of Bakarudin, 35, were found in a monsoon drain that night.

Siti Rahmah, who is one of the prosecution's key witnesses, was originally charged with the four accused, but was given a discharge not amounting to an acquittal in July last year.

“I agreed to the meeting only after Sulkarnain convinced me that he would not harm Bakarudin as he said he wanted to settle the matter amicably,” said Siti Rahmah.

She said Sulkarnain brought his friends with him as he was afraid that Bakarudin would bring some friends to the meeting. 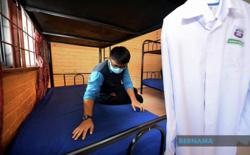