KOTA KINABALU: The Islamic Development Department (Jakim) will submit a proposal to the Syariah Court to compel husbands to discuss first with their spouse their intention to take another wife.

Only when the first wife has given her say and the Syariah Court has heard the opinions of both sides will the husband’s decision be considered, said Jakim director-general Datuk Mohd Shahrir Abdullah.

He said this was among the efforts to streamline the Syariah laws on polygamy being practised in the various states.

At present, some states do not have such a provision, he told reporters after the opening of the 61st Heads of State Religious Councils conference by the Sabah Yang di-Pertua Negri Datuk Ahmadshah Abdullah here on Thursday.

He said wives should be consulted before their husbands remarried or the Syariah Court should be allowed to decide on the matter after hearing the opinions of both parties.

He added that the Syariah enforcement manpower in all states should be strengthened so that Syariah laws would be observed.

Noting that most states had fewer than 20 enforcement staff, he said the figure was insufficient and made the enforcement of such laws difficult.

Ahmadshah said some 100 acts had been classified as offences under the Syariah law and penalties for them were now more severe. 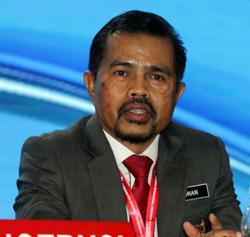