We can cut down heat in our cities by planting more trees and making other adjustments in our concrete jungle.

WITH the current hot weather, we need to keep our cool. Literally.

Efforts are being made by the authorities to cut down heat in our cities such as by planting more trees and making other adjustments in our concrete jungle.

It’s a wake-up call because Malaysia is at risk of facing heat stress in 2050 – a situation where the rise in temperature may affect the people’s health as our bodies struggle to cool off.

This meant that there was a daily maximum temperature of 35°C to 37°C for at least three days in a row.

“Such a situation will increase costs in the long run because the surroundings become less livable.

“Food and energy costs will spike as more resources are needed to counter the heat and keep a suitable temperature, ” says National Landscape Department director-general Rotina Mohd Daik in an interview.

Quoting a report from the Urban Climate Change Research Network (UCCRN) in 2018, she says the best way to reduce heat in our cities is through nature-based solutions such as replanting trees. 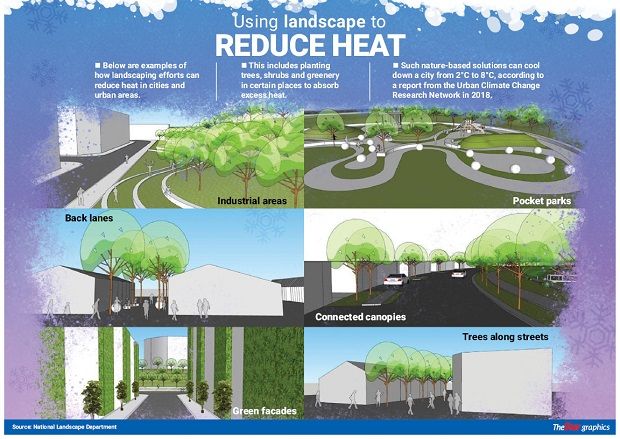 “A study by the UCCRN also showed that such solutions can cool down a city from 2°C to 8°C.

“So, we need to enhance natural landscapes such as by creating vertical greenery in high-rise buildings, planting trees in between lanes and setting up parks.

“This will give shade and enhance wind flow to stop the temperature from rising, ” Rotina says.

It was recently reported that Malaysian cities have gotten significantly hotter over the past few decades, according to a study by Think City.

The study, which observed temperatures in the Kuala Lumpur city centre, Bayan Lepas, George Town, Johor Baru and Ipoh, saw peak temperatures rising by between 1.64°C and 6.75°C over time.

As for the current hot spell, the Malaysian Meteorological Department has said it is expected to last until mid-April, in tandem with the northeast monsoon period.

But even aside from the seasonal monsoon, Rotina points out that our cities are always scorching.

A study by the Malaysian Meteorological Department also showed that the mean temperature in Malaysia is around 27°C, which is still considered hot, she says.

“We must find a balance between landscape conservation and progressing physically, ” she stresses.

Rotina says the current physical space needed for various types of activities in the city has changed with the times.

Currently, the amount of space taken up by businesses and other services can be excessive at a time when processes can be done virtually.

“For example, in banks, the current physical space we have is too much as many transactions can be done online instead of going to the bank in person.

“Hence, we can actually reuse the space around the building for landscaping or turn it into green spaces, ” she says.

Having shady trees and greenery can help to reduce heat in the area, while combining such green spaces with water surfaces can also help to create a more comfortable microclimate.

“This is achieved because water bodies help bring down the temperature when moisture evaporates in the air, ” Rotina explains.

Other features that can reduce heat in the landscape are creating pocket parks between nodes in urban areas and dotting back lanes and roads with shrubs (see graphic).The department suggests that 30% of any development in urban areas should comprise green and public spaces.

“As of now, we know that only 10% of areas to be developed are set aside for this purpose. But that is not enough, ” Rotina highlights.

To make sure there is enough land for landscaping and green areas, the department has outlined several steps such as conserving parks and integrating landscape planning, development and management nationwide.

It is also intensifying studies on the preservation and conservation of the country’s natural landscape resources.

While it may be a bit of challenge to redesign and modify existing buildings, she says standards and requirements of new developments should be reviewed.

Trees play a huge role in lowering temperatures in urban areas, as they absorb excess carbon dioxide – a gas that traps heat.

According to the Canadian Council of Forest Ministers, one hectare of mature trees absorbs approximately 6.4 tonnes of carbon dioxide per year.

On replanting trees, Rotina says the department recently surpassed its target of growing 20 million trees by 2020 – it planted about 600,000 more than this number.

“The Energy and Natural Resources Ministry has set a new target for 100 million trees to be planted by 2025.

“We hope that our numbers can contribute to this goal and at the same time, help in decreasing the temperature in Malaysia, ” she says.

It’s also undeniable that the public movement has an impact on the environment and temperature.

During the movement control order (MCO), Rotina says the changes in lifestyle, including limiting public movement and activities, contributed to decreased carbon production.

“When we were asked to work from home, there were fewer cars on the road and less traffic to many tourist spots.

“That is why we hear of news that many rivers, including the Melaka river, were looking crystal clear since no one was there to throw rubbish into them, ” she illustrates.

But now that the MCO has been changed to conditional and recovery phases, it is up to the rakyat to protect our surroundings too.

“I believe the spillover effects of human reaction can change our environment.

“As transportation is mobilised during the conditional and recovery MCO, it affects the temperature of our surroundings.

“As such, we try to encourage walking in cities by creating green nodes or linkages so that it is comfortable for pedestrians and reduce our carbon footprint.

“But it’s important that all citizens appreciate the landscape by not polluting the environment too, ” she says. 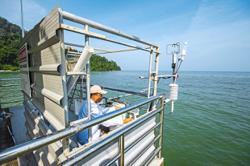