AS 2020 unfolds, Malaysians can expect the landscape to bloom around us too.

At least, that is the vision 2020 the National Landscape Department has in mind: to create a beautiful garden nation by this year.

It is hoping to create a more scenic landscape by encouraging local authorities to plant flowers and shrubs with coloured leaves and trees that provide shade from the blazing Malaysian sun.

To kick things off, the department added a splash of colour to the road leading to the Parliament building in Kuala Lumpur.

The path towards the august House is decked with green and maroon bushes, with sprinkles of yellow and purple blooms and lined with Malaysian flags flapping proudly in the wind.

The landscaping work, supported by the Kuala Lumpur City Hall (DBKL) and Federal Territories Ministry, was completed in October last year – just in time for the last Dewan Rakyat meeting of the year. 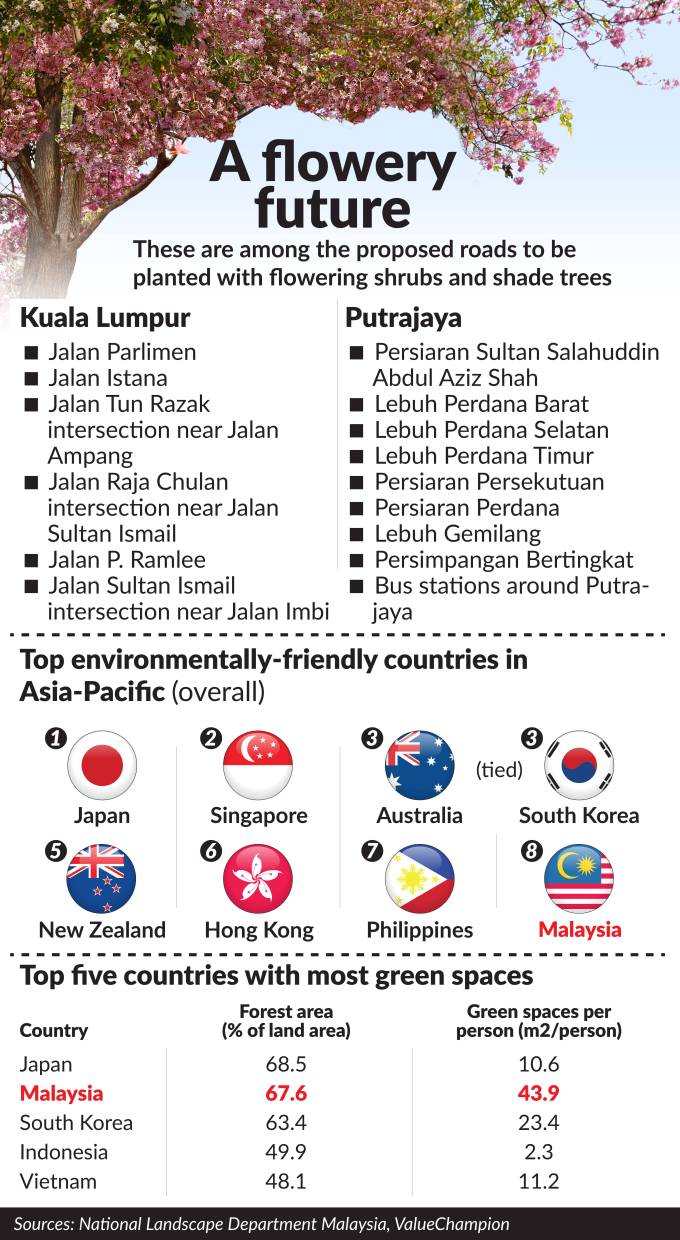 “We thought it would be good for lawmakers to see how significant a difference can be made if you improve the surroundings.

“We hope they will realise this and spread the message back to their own constituencies, ” department director-general Rotina Mohd Daik tells Sunday Star.

Efforts to beautify our surroundings will be especially timely with the Visit Malaysia 2020 (VM2020) campaign to promote Malaysia as a top tourist destination.

Through VM2020, we expect to welcome 30 million tourists from all over the world.

Malaysia is also the host of this year’s Asia-Pacific Economic Cooperation (Apec) summit and World Congress on Information Technology, among others.

For the Apec summit, 16,000 international delegates are expected to arrive at our shores for over 120 meetings in five cities around Malaysia throughout the year.

“We called on all local authorities in December to plant flowering plants or coloured leaves at strategic areas.

“The main reason is for areas to create an identity of their own. This would associate landscape with tourism like in Japan where sakura flowers are iconic of their landscape, and hence boost tourism.

Even the Prime Minister himself has mentioned the importance of maintaining a good landscape.

During the National Landscape Day in March last year, Tun Dr Mahathir Mohamad said he wanted beautiful landscapes around homes, villages and towns to be a part of our culture and our society – to turn Malaysia into a beautiful garden country.

Rotina’s department translated this into policy to be followed by states and local authorities.

But while the move isn’t mandatory, she says many local councils and authorities have been cooperative and supportive of it.

“I hope landscape can be part of our culture where our people will appreciate scenic natural surroundings and feel proud to be in such a beautiful environment, ” she says.

“We want the landscape work around the Parliament building to be a trailblazer, an example to other places to spark off a landscape transformation.

“We would like more places with heavy visitor traffic to embrace this change.

“For example, entry points into towns, main roads – including the North-South Highway or gateways for international tourists like Sepang, Langkawi and Labuan – could be decorated to greet visitors, ” she adds.

Rotina says that DBKL has identified six main roads to be developed into scenic landscapes while Putrajaya Corporation has proposed nine areas for beautification.

“We intend to get all states and cities in Malaysia to participate, including Kuching and Kota Kinabalu, ” she adds.

Another aspect that the department stresses on is for local councils to plant flowers that bloom throughout the year.

Examples of annual flowers are periwinkles, petunias and zinnias, while the department also encourages planting flowering shrubs like bougainvillea, hibiscus and ixoras.

It also encourages shady trees like tecomas and frangipanis.

Some areas in Alor Setar and Melaka already have pretty white and pink flowers sprouting from tecoma trees, which resemble the sakura blooms in Japan.

A shady situation But it’s not just about flowers.

The department also aims to have greener landscapes to help cool down urban areas.

Imagine the current hot weather in cities and towns, and for it to drop by 8°C.

It’s possible to do this, by planting shade trees in urban areas, according to a study from the United Nations’ Food and Agriculture Organisation in 2017.

“Our cities are full of development. Concrete and building blocks contribute to urban heat islands in towns and cities.

“The temperature in urban areas is often about 9°C warmer than areas with heavy tree coverage.

“Planting trees can help offset the build-up of carbon dioxide in the air and reduce the greenhouse effect, ” explains Rotina.

As such, the department wants more shady trees along the roads of Malaysia.

They would not only give a certain location a lot of character but also mitigate the sweltering heat.

Areas covered by foliage recorded comfortable temperatures of between 21°C and 26°C, based on a study by Universiti Kebangsaan Malaysia (UKM).

The findings were from UKM’s earth observation centre, under the institute of climate change, which studied the impact of public parks in Kuala Lumpur.

In contrast, it was reported that several areas including Kepong in Kuala Lumpur recorded a high of 36°C in February last year.

While more in depth studies are needed on this matter, such initial findings show that green landscapes in urban areas can provide cooler and more comfortable settings for city folks.

The department is trying to create seamless connections with shaded walkways, green nodes and pockets in cities so that walking outside will be a more pleasant experience.

But it will take more effort to bring significant changes as it requires strong commitment from everyone.

“The average Malaysian in the city spends most of their time in air-conditioned places.

“You don’t realise how hot it is until you are outside and hopefully, we can change this, ” Rotina says.