Feature: With fewer than 200 tigers left, Malaysia is facing a crisis

Today, fewer than 200 of these symbols of our national heritage are left.

“Tigers are part of our Jata Negara (National Coat of Arms), and are in all our emblems. It is very important that the whole country rallies behind this cause, ” Lim tells Sunday Star during a recent interview at WWF-Malaysia headquarters in Petaling Jaya.

The biggest threat to tiger conservation in Malaysia comes from poaching. Poachers from Indochina, assisted by locals, hunt Malayan tigers due to the high demand for body parts to be used in traditional Chinese medicine and other purposes. To make things worse, last year the Chinese government reversed a 25-year-old ban on the trade in tiger bones for traditional medicine.

If nothing is done soon, we will forever lose the Malayan tiger, classified as critically endangered by the International Union for Conservation of Nature (IUCN), within the next five and 10 years, Water, Land and Natural Resources Minister Dr Xavier Jayakumar told parliament in March. 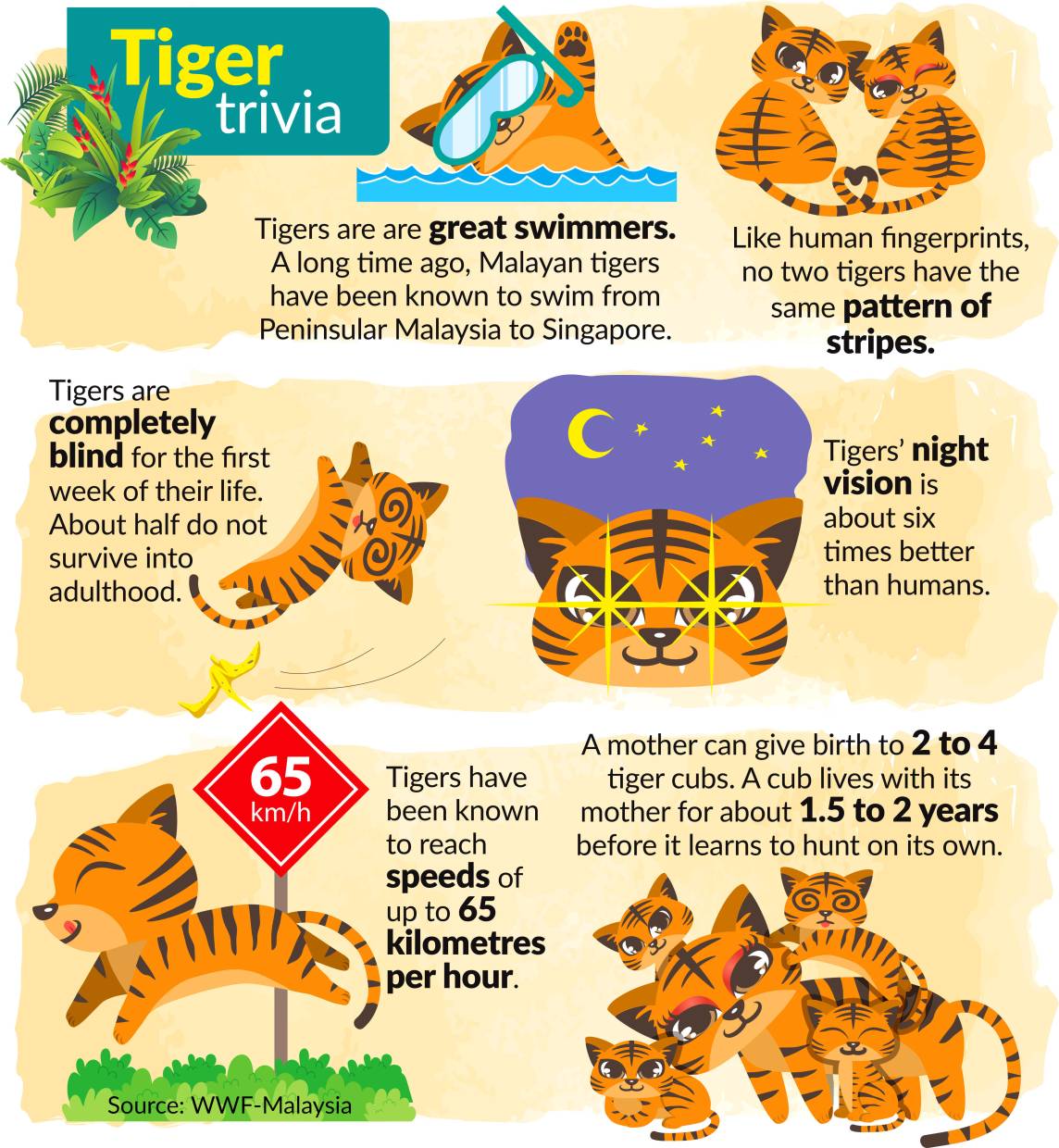 An especially poignant moment in conservation for Lim was meeting Malaysia’s last Sumatran Rhino, Iman, who was then being cared for by specialists from the Borneo Rhino Alliance.

“Being up close and personal with her was a really touching moment for me. Knowing that she was the only one left made my heart reach out to her. We understand that they are solitary animals, but she must have been so lonely, ” says Lim, who describes Iman as being ‘chatty’ during their meeting.

In late November, Lim received a heartbreaking message informing her that Iman, who was battling cancer, was on her deathbed. Although Lim was determined to fly back to Sabah, unfortunately she did not make it in time to say her final goodbyes.

Iman’s death further drives Lim’s determination to save the tigers and prevent Iman’s story from ever happening again.

“My heart grieved but my mind was telling me that being sad is not enough. We need to act. We need to send a compelling message to Malaysians and the government.This is what led me to the tigers because they are the next to go extinct if we do not do anything, ” says Lim.

One area in need of immediate attention is the Belum-Temengor jungle complex, where tiger numbers are at a critical stage.

According to the Perak State Parks Corporation’s estimate, there are only 23 tigers left in the Royal Belum and Temengor forest reserves. Just seven to eight years ago, there were sixty.

With this in mind, WWF-Malaysia is taking active measures to combat and frustrate poachers in the area. In mid-2018, it launched a plan to flood the area with patrol teams in an initiative called Project Stampede.

These patrol teams, totalling some 80 rangers, primarily consist of people from the local indigenous communities living in the landscape who are trained to carry out patrols, remove snares and collect data on poaching.

“The first [benefit] is for us to support the indigenous community but they also know the terrain and the forest well, ” explains Lim.

One major impediment to tiger conservation is the presence of snares that trap tigers, their prey and other wildlife. A decline in the number of prey also contributes to lower tiger numbers. From July 2016 to June 2018, a total of 167 active snares were deactivated and a further 518 inactive snares were discovered by WWF-Malaysia’s patrol teams. 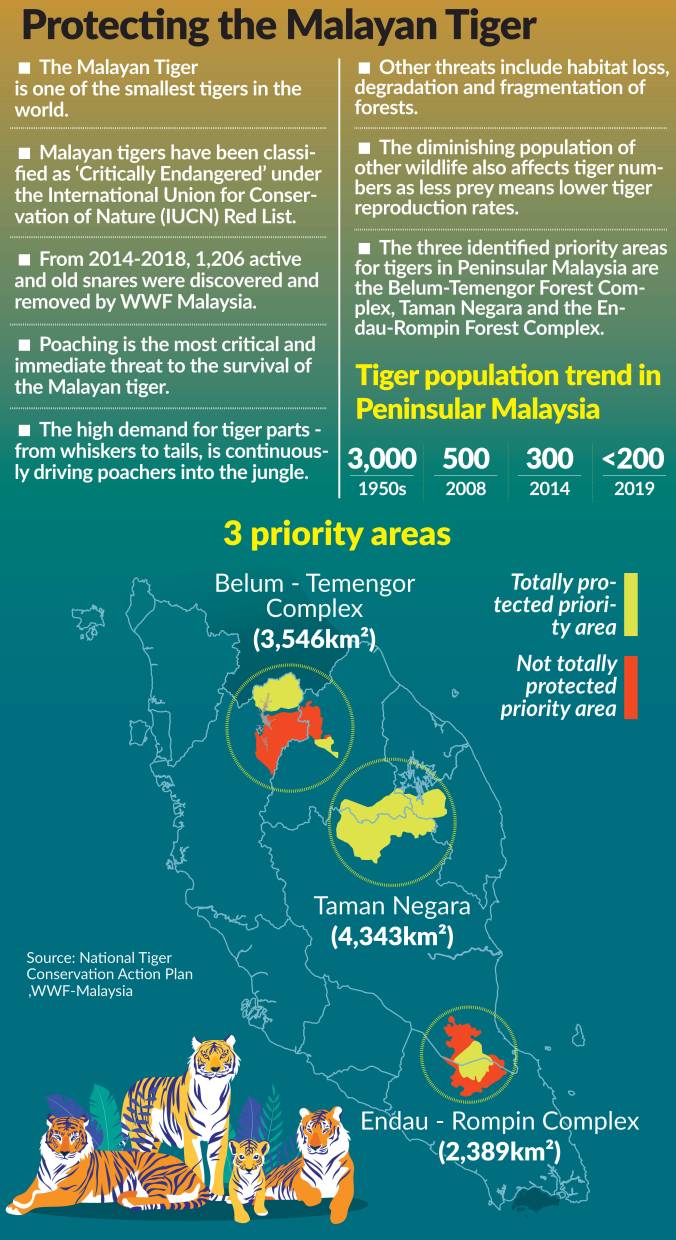 “Thanks to Project Stampede we have seen a reduction of 89% of snares. That is what we can do immediately, ” says Lim.

While efforts like Project Stampede are critical to ‘stop the bleeding’, more still needs to be done.

Lim explains that support from the government, private sector and members of the public is crucial if we are to reverse the decline of tigers. She looks to the success stories of India and Nepal as inspiration.

“India suffered the same fate a long time ago. When I presented our crisis to them [during a visit], an Indian conservation director told me that that was their situation ten years back, ” says Lim. “But with political will, India now has about 50 tiger reserves in the country.”

The Times of India reported that 1,411 tigers were recorded in India in 2006 which increased to 2,967 in 2018, a positive development attributed to India’s national conservation policies.

Locally, Lim describes Ops Bersepadu Khazanah as one of the biggest wins coming out of advocacy work. The police launched the operation last September in collaboration with The Wildlife and National Parks Department (Perhilitan) to put a stop to poaching.

According to the police, each tiger can fetch up to hundreds of thousands of ringgit online and in the black market. Since its launch, wildlife trade monitoring network Traffic observed that Ops Bersepadu Khazanah has shown promising results with ‘mega seizures’, dozens of suspects detained and a money-laundering investigation initiated against a local wildlife crime group.

Among those involved in Ops Bersepadu Khazanah include the Senoi Praaq battalion consisting of Orang Asli officers who are highly skilled at tracking in the jungle.

“We work with the police and share information with them if we find sightings of potential poachers, ” says Lim, who expresses appreciation to the police for their conservation measures.

Looking to the future, WWF- Malaysia hopes that tiger conservation will be included in the 12th Malaysia plan and is currently campaigning for the Wildlife Conservation Act 2010 to be further strengthened in order to send a strong message against poaching.

WWF-Malaysia is also requesting for the government to set up a National Tiger Taskforce to be chaired by the Prime Minister and for Ops Bersepadu Khazanah to be made permanent so that there is long term sustainability in the project.

“When everybody works together, there is political will - we can bend the curve. We can reverse and we can arrest the decline of tigers. But we need everybody’s collaboration to do so, ” urges Lim.