An inspiration: Undeterred by an accident that robbed her of her motor skills, Dr Parrvinaa persevered and regained her ability to walk and realise her ambition of becoming a doctor.

AS a child, Parrvinaa Sonie Bhardwaj knew she wanted to become a doctor.

“I would go around with a stethoscope around my neck when I was young,” she recalled.

But as the Public Service Commission (JPA) scholarship recipient grew up, she realised that becoming a doctor took more than just books, stethoscopes and drugs.

“I need to be passionate about treating patients. It’s about listening to patients, examining them, coming up with a diagnosis and treating them.”

It was more of, as she succinctly put it, “dealing with people”.

This burning ambition, however, was put to the test on Dec 1, 2016, when she sustained severe traumatic brain injury in a car accident.

The mishap shattered her beyond physically – traumatising her mentally and emotionally as well.

“It took me about five months to regain my senses, after which I became depressed.”

Yet being a strong and resolute person, Dr Sonie was determined to pick herself up to continue her studies.

“A temporary physical limitation was not going to hold me back from achieving my dreams,” she recounted, choosing her words carefully, separating “limitation” from “disability”.

Rediscovering her motor skills was another traumatising sequence in her road to recovery as she had to relearn almost everything – initially from rolling over on the bed to sitting up with support.

Eventually, she could sit up without help, then stand, before literally taking baby steps. Soon, she had to reacquaint herself with holding pencils, scribbling, writing, then drawing, all of which were relearned from scratch.

She explained that relearning is not unlike how a baby discovers how to interact with the world around it, except for one key difference: “I had past memories of every motor activity. My mind knew it, but the signals from the brain wouldn’t reach the muscles to perform the task.”

Those were trying and frustrating times for her, as she lamented each failed attempt. Slowly but surely, however, her motor activity improved.

With that same sense of purpose, just nine months after the accident, she returned to college and attempted sitting for an examination. Looking back, she admitted that the move was premature.

“It was too soon after the accident, and I had also not attended any clinical postings – so I failed in my examination, for the first time in my life.”

Two years later, with ample time to progress in her recovery, she returned to college and passed her examinations.

During that time, she progressed from sitting in a wheelchair to using a walking frame, a rollator walker, then a quaripod.

“When I returned to the MMMC Muar, Johor, campus, my hostel room was arranged on the ground floor, and wall railings were installed in the room and washroom to allow me to get around safely.”

This helped her tremendously as her cerebellar injury mainly affected her balance and coordination, making her prone to falls.

A college van was also at hand to transport her to Sultanah Fatimah Specialist Hospital in Muar daily for her medical postings, as she was unable to board the bus.

“At the Melaka campus, a van transported me to the Melaka Hospital, while lecturers held classes on the ground floor to accommodate my situation.

“MMMC understood my difficulties,” she said.

Today, while still not 100% in control like before the accident, Dr Sonie is able to walk without assistance. With her horrific ordeal of not only experiencing the accident, but having to claw her way back to a life that is close to normalcy, Dr Sonie today wonders how much we, as a community, are doing to assist those who had been in her situation.

“Let’s start with a very simple example: When I visit most malls in a wheelchair, I find that not many have ramps or even wheelchair assistance. And this is a very basic, minor thing,” she pointed out.

Also being in the medical field, she has met medical practitioners who do not understand the severity of brain injury and are oblivious to her difficulties and struggles.

Due to that, Dr Sonie intends to set up a non-governmental organisation in Malaysia for brain injury in order to bring better awareness and hopefully, better facilities and services that will assist those in her predicament. 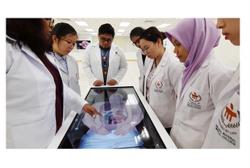