Lim (left) presenting an honorary doctorate to Mandela in Johannesburg. The scroll was received by Dr Ahmed Kathrada on Mandela’s behalf. — File pic

The Nelson Mandela Day has been declared by Limkokwing University to pay tribute to the African icon and to celebrate the positive values that he had brought to the international community.

The university’s president Tan Sri Lim Kok Wing said July 18 had been picked to commemorate the occasion as it was the late South African president’s birthday.

“The university will mark this special day for this great man at our main campus here as we want our students, regardless of their nationalities, to understand the contributions that he had brought to the world, not just South Africa.

“Mandela also has a special place in our university as we worked with him personally in the run-up to South Africa’s first democratic elections and played our part in ensuring that his ANC (African National Congress) went on to win the elections,” he said.

A series of activities, he said, had been planned for the celebrations, adding that its campuses in Botswana, Lesotho, Sierra Leone and Eswatini, formerly Swaziland, would also join in to support the occasion.

He said the celebration was a run-up to the launch of the book, Transform Africa, on the successes of the Limkokwing university campuses in Africa.

“Africa’s future is being reinvented and Africa’s youth are being empowered through education. The continent is set to be the new growth frontier,” he said. 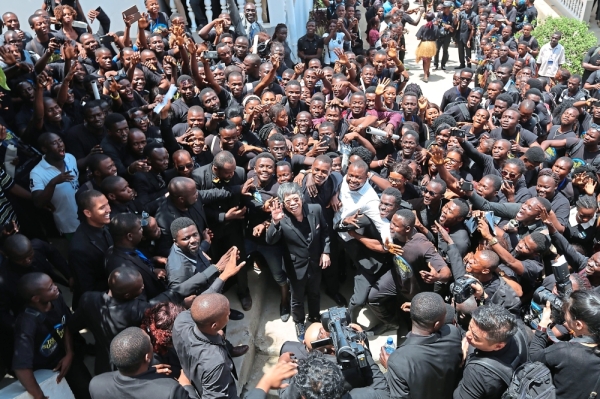 Lim said Mandela would have been 101 years old on July 18 as he was born in 1918, adding that “the world, especially the young, needs to understand that this man, who ended apartheid, spoke of reconciliation and forgiveness when he became the president.

“Not many politicians can be like Mandela, who was jailed for 27 years, and yet had a big heart. He was the enduring voice of peace and progress. He had no vindictiveness,” he said.

He said these were the values that the university wanted to inculcate in its students, as they were the future leaders.

Tracing his relation with Mandela, Lim said over two decades ago, he had joined Tun Dr Mahathir Mohamad, to welcome Mandela at the airport in Lusaka, Zambia.

Dr Mahathir was the only non-African head of government among those gathered at the airport to greet Mandela, who had been released days earlier from prison by the white minority government in South Africa.

The world’s most famous prisoner, who led his country’s long struggle against apartheid, the system of racial segregation and oppression, was free at last and Dr Mahathir had travelled all the way there for the historic airport ceremony in February 1990.

“I was with a small group of Malaysian reporters, standing under the hot sun at the tarmac, and some questions played in our minds that perhaps Dr Mahathir looked the odd man out as it’s rare in terms of protocol for a prime minister to be present at such a ceremony.

“Many would have thought that at best, Mandela’s release was a symbolic gesture by the white government in response to international pressure.

“Perhaps not Dr Mahathir, who being the far-sighted leader that he is, seized the chance to cultivate a personal relationship with Mandela at the earliest possible moment.

It was also the beginning of Lim’s involvement in South Africa, and Africa, to a larger extent.

On Dr Mahathir’s recommendation to Mandela, he was asked to devise the public relations strategy for the ANC during the 1994 South African election. Besides this, he was involved in the massive voter education exercise, where out of 20 million eligible voters, 18 million would be voting for the first time. Of this figure, nine million were illiterate.

“I travelled the entire length and width of South Africa to see and feel for myself the pulse of the people. There was a lot of unrest and it didn’t help when some bombs were let off,” he said, and in the process, his company produced 60 tonnes of billboards and posters for the elections.

“The campaign slogan was A Better Life For All, which I felt was too definitive but it had been decided before I was engaged. I wanted to change it to A Better Future For All because a better future was a more long-term goal.”

He lost the fight but won a bigger prize as the iconic campaign of a smiling Mandela surrounded by children of all races, became the defining image of the campaign.

“It sent a powerful message not only to South Africans but the world, who was watching with great interest,” he said.

South Africa’s first free and all-inclusive elections were held in April 1994, which Mandela’s ANC won overwhelmingly and a month later, Mandela was elected the first president of South Africa’s Government of National Unity.

At the Nelson Mandela Day celebrations, among the exhibits will be the iconic poster, which proved popular. “Every time we put them up people would take them away to hang on their walls. They wanted this picture of their hero in their homes,” said Lim, who criss-crossed South Africa with Mandela and other leaders during the election campaign.

In 2007, Lim presented his university’s honorary Doctorate of Humanity to Mandela, whom he aptly describes as the world’s greatest living statesman.

In return, Lim was accorded South Africa’s highest award by the country’s then president, Jacob Zuma, for his role in assisting the country.

And Lim has set his sights on expanding the Malaysian brand to Uganda and South Africa, as part of his ambition to produce skilled and digital-savvy graduates for the continent, saying he wanted to helped the continent in upgrading its human development plans.

For Lim, his Transforming Africa journey is an ongoing one with plans to set up campuses where Limkokwing University is invited.

“Waiting for us to be there are Namibia, Uganda, Nigeria, Sudan, South Africa, Kenya, Zambia, Senegal, Liberia.

“The university has made a big impact in the continent, as we are widely seen as the most technology-driven university in the African continent.

“We are known to bring the latest in digital technology to all the countries we have established campuses. We are by far the most industry-driven everywhere we run campuses. And all these campuses are most actively supported by industry.”

That aside, the university has worked as partners with several governments in Africa to jointly fund scholarship students, for example.

Not known to many is that the university even provides training to the police and various ministries – including countries where we do not have campuses.

But the university has also achieved a reputation for its philanthropic endeavours, as it has a Special Needs Unit set up since 2013 to assist students with limited access to basic, let alone tertiary, education. The university even provides the Disabilities Scholarship each year to students.

“These are the values that Mandela had cherished and uphold, and we surely want the Nelson Mandela commemoration to highlight these,” said Lim.