“The passion and drive among TARCians - staff and students - are strong. I believe that through hard work, we will become a full-fledged university in time to come.

“Many people have told me it won’t be easy, but I accept the challenge and promise that my team and I will do our best,” he told StarEdu in an interview.

While pursuing our goals, TAR UC would continue to provide affor­dable and quality education, he added.

Set up in 1969 as TAR College (TARC), the institution focused on providing tertiary education opportunities for young Malaysians regardless of race, class and creed who were seeking quality education as well as meeting the rising demand for human capital from businesses and industries.

It started with a single campus in Setapak, Kuala Lumpur, which is now the main campus that sits on a 75.3ha piece of land.

Subsequently, five branch campuses were established in Penang, Perak, Johor, Pahang and the most recent in Sabah, which is slated to be ready this year.

TAR UC is one of the oldest higher education institutions in Malaysia with nearly 200,000 students having passed through its doors. 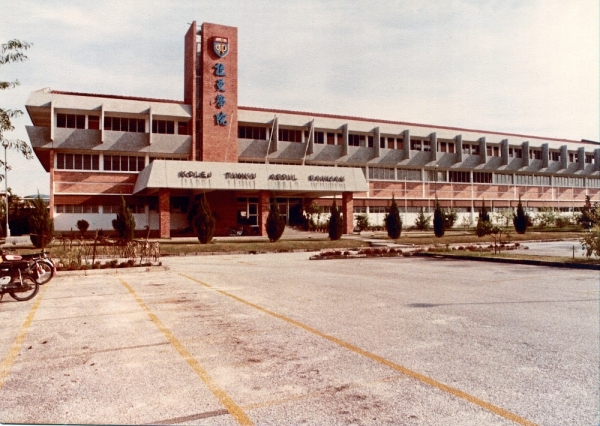 The first phase of the TAR College complex in Kuala Lumpur which was completed in mid 1976.

It currently has a student population of about 28,000 including international students from more than 20 countries taking up a wide range of disciplines from foundation and A Level to accountancy, finance, business, economics, engineering, built environment, applied sciences, ICT as well as mass communication, creative arts, social science and hospitality management.

In addition, there is also the Centre for Postgraduate Studies and Research that focuses on research.

The institution has won numerous scholastic awards and recognition with the most prestigious including the Premier Digital Tech University in 2017 and Asia Pacific CSR Awards 2016 where the institution won the Excellence in Education Improvement award.

MCA president Datuk Seri Dr Wee Ka Siong, in his opening remarks at TAR UC’s 50th anniversary celebration last Sunday, said he is confident TAR UC will continue to stand tall as one of the country’s premier higher learning institutions with the strong foundation laid down by its founding leaders.

“His aspiration became the institution’s vision to provide opportunities for Malaysians to pursue quality education and to supplement the government in developing a sufficient skilled workforce,” he said.

Committed leaders from MCA such as Tan Sri Lee San Choon travelled the length and breadth of the country to drive many fundraising initiatives for the institution, added Dr Wee.

“Another visionary leader is Tun Dr Ling Liong Sik who led various efforts to raise the necessary funds for the expansion of the higher learning institution.”

Dr Wee noted that TAR UC places great importance on the standard of its programmes, which has resulted in it being recognised locally and internationally.

“In the past 50 years, TAR UC has achieved so much in terms of academic credentials and its standing in academia.

“For instance, we have been recognised as the Platinum Approved Learning Partner by ACCA, which is the highest level of accreditation given to universities and colleges globally.

“TAR UC is also the only institution in the world to be granted by ACCA the privilege to conduct the Internally Assessed ACCA Funda­mentals programme,” Dr Wee said.

“Our presence throughout the nation in Kuala Lumpur, Penang, Perak, Johor, Pahang and Sabah reflects our commitment in widening the access to quality and affordable education,” he added.

He urged the TAR UC community to stand united in a bid to push the institution to greater heights.

“With unflagging determination and strong willpower, we can chart another glorious voyage into the next 50 years with greater achievements,” he said.

Also at the anniversary last Sunday, the 2019 TAR UC community sealed a time capsule, which contained many aspirations and messages on what they hope TAR UC will be in the next 50 years.

The time capsule will be sealed in a secured area and will only be unveiled in 2069.

Covid-19: Too early to tell how many teenagers would refuse being vaccinated, says Education Ministry
Covid-19: Education Ministry to provide self-test kits for boarding schools nationwide
Options for teens to get jabs
Students happy, relieved to be vaccinated
DG targets 80% of kids jabbed by next March
‘Teen vaxxing needed to hit herd immunity’
Students at military camp schools to be jabbed too
New circular on teacher transfers out soon, says Radzi
Over 300 students at Putrajaya school among first teens to get vaccine jabs, says Radzi
Applicants who failed to get a place in public universities may send in appeal