Participants pose with a photo of Phakkhaphon Iamcham, a 14-year-old Thai girl who is one of the subjects of the “Foundation for live and love” campaign, during the regional launch last year. — Photo courtesy of Unesco

Countries in the region increasingly acknowledge the importance of equipping young people with the knowledge, attitudes and skills to make responsible choices in their lives

PICTURE this. A nine-year-old in Malaysia, reading about a character named Amira in a school textbook, is told to take three steps to protect the “modesty of her genitals” and keep social ostracisation and family shame at bay. Imagine. The societal pressure, responsibility and burden on girls to conform. Imagine the victim blaming should they “fail” to do so.

The social media outcry in Malaysia was swift, with the story carried by global news outlets. The textbook in question has not been recalled, however, and it will take much more than a Band-Aid – the Education Ministry has put a sticker to cover the graphic – to enable all children and young people in Malaysia to experience healthy, equitable and respectful relationships as they transition to adulthood.

According to a BBC report dated Jan 16, Deputy Education Minister Teo Nie Ching referred to a failure of quality control, pointing out that that “the general understanding on sex education is still low”.

In the same article, Parent Action Group for Education Malaysia chairman Datin Noor Azimah Abdul Rahim said the incident put the focus front and centre on the lack of sex education in the Malaysian syllabus. Noor Azimah added that there is a lack of consensus on a definition of sex education and, in some quarters, a “rather extremist” understanding “that sex education means sexual intercourse, that’s all it means”.

Now picture this. A syllabus for sexuality education in Malaysia that is comprehensive, scientifically accurate; age and developmentally appropriate, taking into account the changing needs and capabilities of a child and young person as they grow; based on gender equality and a human rights approach; and culturally relevant.

The revised International Technical Guidance on Sexuality Education (ITGSE) released by Unesco in 2018 was developed to assist education, health and other stakeholders in the development and implementation of school-based and out-of-school comprehensive sexuality education programmes and materials. 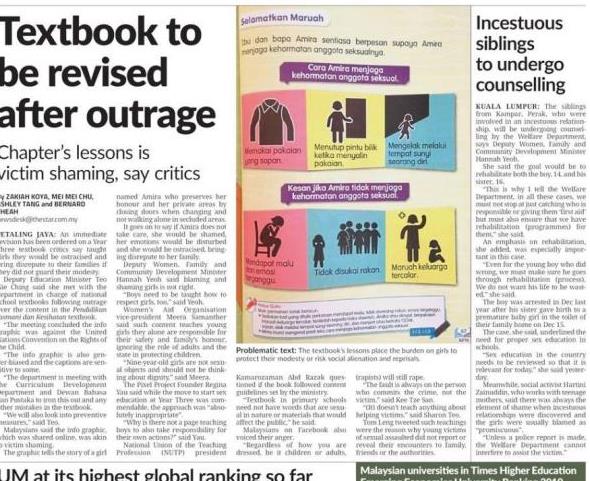 Comprehensive sexuality education (CSE) is defined by the guidance as a “curriculum-based process of teaching and learning about the cognitive, emotional, physical and social aspects of sexuality.

CSE aims to equip children and young people with knowledge, skills, attitudes and values that will empower them to: realise their health, well-being and dignity; develop respectful social and sexual relationships; consider how their choices affect their own well-being and that of others; and, understand and ensure the protection of their rights throughout their lives.”

A 2016 review of available evidence on the effectiveness of CSE concludes that sexuality education has positive effects, including increasing knowledge about different aspects of sexuality, behaviours and risks of pregnancy or HIV and other sexually transmitted infections (STIs).

Strong evidence also concludes that sexuality education improves attitudes related to sexual and reproductive health and increases communication with parents about sex and relationships. Studies also show that CSE is effective in preventing and reducing early and unintended pregnancies in different contexts.

Provided in or out of schools, CSE does not increase sexual activity, sexual risk-taking behaviour or STI/HIV infection rates, a common concern expressed by education stakeholders.

Equally important is the finding that abstinence-only programmes have been found to be ineffective in delaying sexual initiation, reducing the frequency of sex or reducing the number of sexual partners. Due to the gender transformative approach of CSE, the evolving understanding of CSE recognises that this kind of education can also contribute to wider outcomes such as gender equitable attitudes, confidence and self-identity.

Countries in the region increasingly acknowledge the importance of equipping young people with the knowledge, attitudes and skills to make responsible choices in their lives, particularly in contexts where they are exposed to a range of information sources, which may not always be accurate or age appropriate. A recent UNESCO campaign on CSE “A foundation for life and love” captures the voices of young people and their families from around the world, reflecting on their experiences of sexuality education, and what they wish they had learned.

In a 2011 study by the Centre for General Studies, Universiti Kebangsaan Malaysia (UKM), an overwhelming majority of respondents were of the view that sex education had not been taught in Malaysian schools. In another 2011 study by Universiti Malaya’s Department of Social Administration and Justice on the effectiveness of a school-based sexual abuse prevention curriculum, only 40 percent of nine-year-old respondents knew what to do in instances of an adult stranger touching them in an inappropriate manner. This strongly indicates that the sexuality education curriculum needs to provide the knowledge, attitudes and skills to enable children to protect themselves.

Malaysia is committed to the 2030 Agenda and its global Sustainable Development Goals (SDGs) that calls for action to leave no one behind, and for the realisation of human rights and gender equality for all.

Data from 2017 from the Unesco Institute for Statistics (UIS) shows that Malaysia held the distinction of being part of a handful of countries from the region that reported on SDG indicator 4.7.2, which captures data on the proportion of primary schools that provide life skills-based HIV and sexuality education. Malaysia reported 100% coverage in primary schools.

This provides Malaysia with an opportunity to take a leadership role, to mobilise political commitment and to promote meaningful youth engagement, to review, strengthen and scale-up existing sexuality education programmes and materials in line with the latest evidence. This is essential to provide all children and young people in Malaysia with a foundation for life and love, in a world where gender-based violence, gender inequality, early and unintended pregnancies, and HIV and other sexually transmitted infections (STIs) still pose serious risks to their health and well-being.

The writer is the Regional Advisor (HIV and Health), Section for Inclusive Quality Education at Unesco Bangkok.

Note: An immediate revision has been ordered on a Year Three textbook critics say told girls they would be ostracised and bring disrepute to their families if they did not protect their modesty.

Deputy Education Minister Teo Nie Ching said she met with the department in charge of national school textbooks following outrage over the content in the Pendidikan Jasmani dan Kesihatan textbook.

She said the department is meeting with the Curriculum Development Department and Dewan Bahasa dan Pustaka to iron this out and any other mistakes in the textbook.