(From left) Ovinis, Chapman and Chua deliberate over which entries make the cut for the Merit Awards and the grand finals.

NOT many people step into a room and think about the colour of its surroundings.

The psychology of colour tells a decorator that neutrals are a necessity for focused spaces like meeting rooms that demand a focal point.

Last week, however, the unremarkable beige walls at a meeting room in Menara Star, Petaling Jaya, were transformed into a plethora of colours as shortlisted entries for Star Media Group’s Star Flicks movie poster contest adorned the walls of the meeting room.

The entries were submitted by 7,000 hopefuls who were vying to catch the judges’ eye for the Merit Awards and finals category.

The contest, organised by Star Media Group’s Newspaper-in-Education (NiE) programme required students, in teams of four, to craft a movie poster worthy of the grand prize – a six-day, four-night trip to South Korea, sponsored by the media company. Star Flicks, is a movie poster contest with a twist. The crafting of the movie poster is based on real-life stories taken from authentic issues found in the newspaper.

The contest drew secondary school students in Malaysia nationwide. With teamwork once again a focus in the competition, students collaborated to produce movie posters conveying current issues highlighted in articles from The Star this year.

Students could choose to focus on any of the following themes: health, social values, education, charity, environment, technology, safety and relationships.

Besides preparing a summary of the movie, students had to hone their skills to explain the message they wished to convey about the issue in an abstract limited to 150 words.

A myriad of social issues were tackled with some topics such as artificial intelligence and sexual abuse taking centrestage.

Posters were judged on the suitability of the visual and its relevance to the article in the newspaper, its title and tagline.

The writing skills within the abstract and its strength in conveying a convincing point were equally important.

“As always, the visual in the poster reels the reader in. We were keen to see how the illustrations were relevant to the current issue. The visual has to engage the reader to want to ‘see’ the movie,” said Ovinis.

While readability and overall appearance played a major role in the marking scheme, the tagline for the movie poster was just as important.

“The tagline sums up the plot, tone and theme of the intended movie. More thought could have been channelled into this element as this was, at times, the tie breaker with beautiful posters,” Ovinis explained.

The contest was launched in March this year and closed on July 4.

Below is the list of schools and teams that have earned a spot in the Merit category.

The five entries selected for the finale will be reviewed next week in StarEducate. 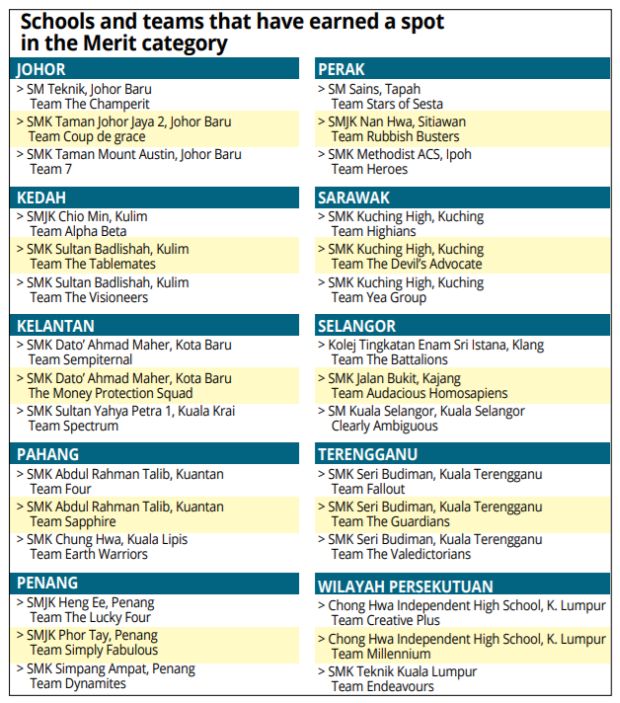