Mahdzir (second from left) receiving the proposal from Kamarozaman (fourth and third from right) as NUTP secretary-general Harry Tan and representatives look on.

TEACHERS can look forward to being protected from parents and guardians once a code of ethics has been finetuned and approved by the Education Ministry.

Education Minister Datuk Seri Mahdzir Khalid said he fully supported a proposed code of ethics for parents and guardians presented by the National Union of the Teaching Profession (NUTP).

“We have listened to the NUTP’s suggestions and views, and we will finetune them at the ministry,” he told reporters after an hour-long meeting with 25 NUTP representatives last Thursday.

The union paid a courtesy visit on Mahdzir to present their proposal.

Mahdzir added that with the code of ethics, there would be no more incidents of teachers being hauled to court by parents or parents and guardians fighting with teachers.

“The code is to protect the plight of teachers but more importantly, it is to ensure a harmonious environment in schools,” he said.

Mahdzir declined to give a timeline to when the code will come into effect but said it would be within a “reasonable” time frame.

NUTP president Kamarozaman Abd Razak said the code of ethics is important to reach the aspirations in the 2050 National Transformation (TN50) initiative.

“There are two categories of recommendations (in the code of ethics) – eight things to avoid and 15 behaviours to comply with,” he said.

He said these included no weapons, including helmets, should be brought into the school.

He also said the code of ethics has been in the works since 2016.

The code contained the guidelines on the do’s and don’ts for parents to prevent unwanted incidents such as threats and intimidations towards teachers.

On another matter, Kamaroza­man said there has been fewer police reports lodged against teachers compared to the past years.

At another event earlier, Mahdzir said the ministry would look into the Psychology and Counselling Division’s suggestion of having a one stop centre to train counsellors in schools.

He said there are presently 10,800 counsellors placed in schools with another 330 in the division itself, institutes of teacher education, matriculation colleges, state education depart­ments and district education offices.

“These school counsellors could renew their training at the centre every three to four years.

“We will look at (the different institutions) to cooperate with on this matter,” he told reporters after officiating the division’s 10th anniversary.

The number of counsellors placed in a school depends on its student population, he added.

Psychology and Counselling Division undersecretary Normazwin Yahya said many school counsellors are those with psychology and counselling degrees who attend their own training.

“Under our division, we have units to train our counsellors to ensure they are competent.

“This is what we want for counsellors in schools as well; a competent and standardised training to upskill them.

“Presently, there is no such centre to regulate the training received,” she added.

In a separate event, Mahdzir called on teacher trainees to stay current amidst happenings of the fourth industrial revolution.

“Teacher trainees should be knowledgable about the fourth industrial revolution, not only in their major,” he said during the launch of a leadership conven­tion for almost 300 teacher trainees from across the nation.

Describing current trainees as “native digitals”, Mahdzir said they must also be proud of the country.

The leadership convention was organised by the National Civics Bureau, Institute of Teacher Education Malaysia and the Education Ministry. 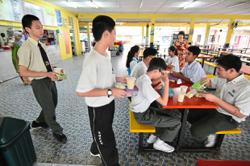 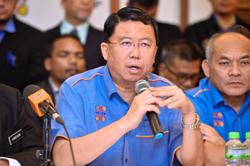