Where the dead are mentors

EDUCATION was her passion and during her teaching career, the late Lee Yoke Chin taught and touched the lives of hundreds of Chinese school pupils.

Sadly in 2012, Lee was diagnosed with appendicular cancer and fought a long battle with the disease.

She was still teaching even while undergoing treatments, right up until 2017 when her condition worsened and she was put under palliative care.

She died of the disease last November.

After being diagnosed, Lee had come across an advertisement for the Silent Mentor Programme and signed up for it. Students practising their skills on their mentors.

As a teacher, she wanted to continue “educating” even after her passing and saw the programme as a good opportunity to do just that.

The programme originated at the Tzu Chi University, Taiwan, to change society’s mindset towards donating their bodies to science.

What makes this programme different from others is the cadavers are not kept but are returned to the families after a week-long workshop to be given a proper burial.

Not only that but students in the programme are sent to meet the family and gain a deeper insight into the lives of their “mentors”, as these donors are called.

The programme heavily emphasises forming a bond and treating the mentors with a lot of respect and care, much like how doctors should treat their patients. Students having a chat with the mentor’s families.

Not just with knowledge, but with empathy and a love for humanity.

Silent Mentor programme director Prof Dr Saw Aik says one of the most important “skills” students learn from the programme is compassion and empathy.

“We hope that our doctors will treat their patients just like they treat their family members, with compassion, care and empathy which is something very difficult to teach or be delivered through a lecture.”

Participants of the programme are fortunate as the mentors are not preserved or embalmed so that they remain as close to a living body as possible.

Instead, they are stored in a freezer from the moment they arrive at the centre in Universiti Malaya (UM) and thawed only when it is time to start the workshops.

There were four mentors in the 21st workshop that was organised in UM in January - Lim Tiam Hock, Phong Kuek Hen, Tan Beng Seong and Yoke Chin. Prof Saw says there is a heavy emphasis on participants forming a bond and treating the mentors with respect and care, much like how doctors should treat their patients.

The programme begins with a brief introduction of the mentors by the students to their fellow participants and close family members. This is based on what they learnt during the home visit.

The home visit, says Monash University Bachelor of Medicine and Bachelor of Surgery student Tok Sin Lei, 21, is when the students get up close and personal with their mentors.

“Though they are no longer around, their family members share stories and show us their old pictures,” adds the second year student.

Sin Lei says at first, she wanted to join the programme because it was a great opportunity to expand her medical knowledge through practising on “fresh” cadavers.

But after spending a little more time researching what the programme really entails, she found the “humanity factor” to be the biggest element drawing her to the programme.

“Understanding, bonding and being empathetic towards our patient is an important part of being a doctor,” she explains.

Perdana University medical student Ashvirni Gilbeth, 24, says she is grateful for this opportunity to join the programme.

“As medical students, we can’t perform these procedures on live patients.

“In this programme, I can learn how to dissect and suture which are essential skills for me later on.

The participants place flowers and thank you cards on the coffins as a sign of gratitude and respect to their mentors.

“Our mentors taught us how to care, respect and have empathy towards others. Without our Silent Mentors, we would not develop these lifelong philosophies of love, respect and inspiration.”

“It was not easy and this was our first glimpse of death. As doctors, we will face the death of a patient and we must learn how to deal with it sooner or later,” she adds.

“He heard about this programme on television and had ‘signed’to his wife by drawing strokes on her palm that he wanted to be part of the programme,” adds Hong Xian. This was because he could not speak in his final days due to his weakened condition.

“Based on what his wife said, he wanted to not only inspire medical students to become compassionate doctors but he also considered himself a rare medical case and his body could be used to find a cure for the disease.”

Lim, says Hong Xian, was diagnosed with myasthenia gravis and later colorectal cancer that spread to other parts of his body. Silent Mentor participants dressing their mentors during the suturing, dressing and coffining workshop.

All workshops start with a moment of silence for the mentor, says Prof Saw - another mark of respect for the departed.

Since there were four mentors during the 21st edition of the programme, each mentor “taught” four different medical procedures to the participants.

At the end of each day, the mentors are carefully sutured, cleaned and laid back to rest.

On the last day, the participants “thank” their mentors and their families for the immense generosity they showed by joining the programme.

The teary-eyed participants lay cards and flowers on the coffins before escorting the mentors and their families to the funeral parlour for cremation.

Anyone can become Silent Mentors, irrespective of their religion, says Prof Saw.

However, this does not mean that their religious burial rites are pushed aside as the committee will arrange for a religious person to conduct the rites during the initiation rites - held just before the workshops start - and the final farewell.

“We believe that these are people who donate their bodies to science, and we should pay respect to these individuals,” he adds. The mentor’s family members can’t hold back their tears as they hear the testimonials from the participants.

“There is no religious separation because this is basically a learning process.”

He also says the students attend the final farewell, with a few even shedding tears together with the families.

“Our participants come from all cultures,” says Prof Saw, adding that religion plays no part during the workshop.

“Instead, what we emphasise on is gratitude towards the mentor and being thankful is practised by all religions,” he adds.

It is truly a noble decision to become a Silent Mentor and although the choice belongs to the donor, it is ultimately the family who will decide whether the deceased will have their wish fulfilled.

No matter how much a family might prepare themselves for the inevitable, it is still a tough moment when the time actually comes.

Lee Sue Wooi, Yoke Chin’s younger brother, says his mother knew about her daughter’s decision but still had trouble letting go when it was time for Yoke Chin’s body to be taken away.

After some coaxing from another sister, she relented and now also feels proud that her late daughter is still continuing to “teach” even when she is gone.

Personally, Sue Wooi says he is very proud of his sister’s generosity although he was kept in the dark about her decision.

“It was a shock to me when I found out she signed up for this programme.”

Despite the fact that anyone can volunteer to be a silent mentor, Prof Saw says that not all donors will become one.

For example, he says, donors who lose their lives in accidents cannot become mentors because the body can be disfigured and bruised.

“Even the bleeding is different as more blood is lost compared to surgical wounds.”

All this will alter the anatomy making the body unsuitable for the programme’s research.

Besides that, the mentors have to reach us within eight hours to be stored in the freezer, he says. 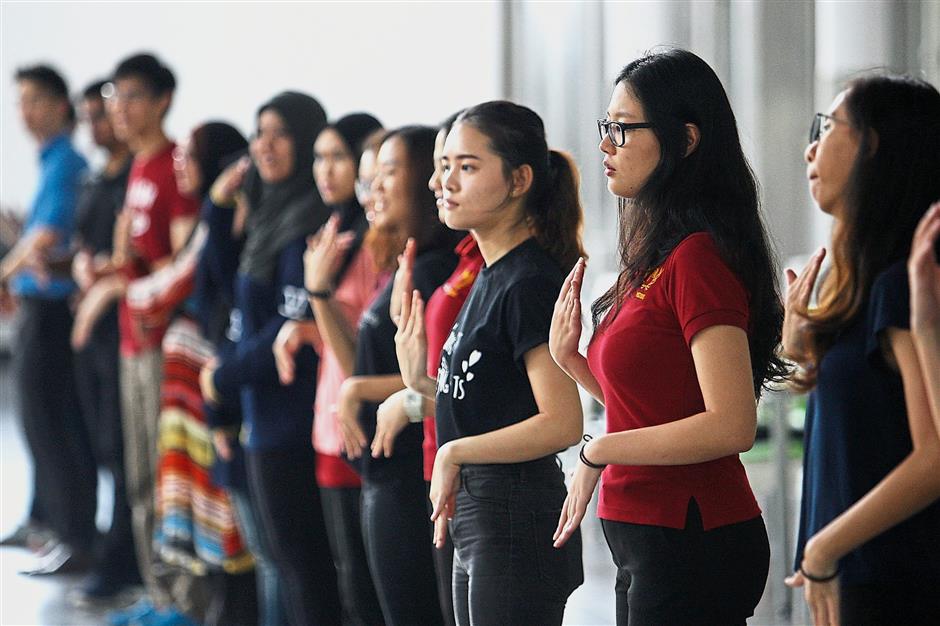 Programme participants practising their gratitude performance for the families of the mentors.

He explains that for accident cases, a post-mortem is required for medico-legal reasons and this means the mentor will not be released to the university in time.

For cases where limbs are amputated, Prof Saw says the mentor can still be part of the programme.

“Most of the time, the abdomen and vital organs are still intact, even if they are diseased, and this is what we (participants) want to see,” he adds.

Starting from this year, Prof Saw explains, the programme is also opened to medical students from all medical schools in Malaysia.

It is not only open to undergraduate students, but also those training to be specialists and researchers, he adds.