PARENTAL groups and educators are in support of the code.

“Several countries have adopted the code. We should consider some of their best practices,” she said, while suggesting that the Rakan COP (Community-Oriented Policing) programme be reactivated in schools.

“Parents drop kids off at school and they leave. Naughty kids walk past the gates in view of teachers and prefects. No one says anything so parents are in the dark. There must be communication at all levels,” she said, adding that channels for parents to complain, must also be kept open or some would turn to the Internet to vent their frustrations.

She also called for at least two administrators to be present to listen to discipline cases in the office. As school heads are often not around, everything must be recorded.

“Find an amicable solution. Helmets and items that can used as weapons, must be left at the guardhouse if a parent wants to enter the school.”

While having a code of ethics is good, Melaka Action Group for Parents in Education (Magpie) chairman Mak Chee Kin feels it should be provided for by the respective schools, not the National Union of the Teaching Profession (NUTP).

This is because different schools, have different cultures. Also, students’ backgrounds and needs, vary. There cannot be a blanket code for all schools.

“If the school has a capable head, he or she can come out with a code that’s more appropriate and specific to the needs to the school.

“A good school head will have a clear management policy so harassment and confrontation of teachers is minimised, if not prevented,” he said.

Calling on the NUTP to use their resources to provide professional training for their members to become better administrators and leaders, he said teachers would be safer and better protected if the school has a strong head.

“The harassment and confrontation of teachers can be avoided if the school policy - especially on security, is working well.

School heads, he suggested, must ensure that:

> School gates are closed at all times.

> All visitors report their presence to the guard on duty.

> All visitors are escorted by the guard to the administrative office.

> Administrators are neutral in addressing issues raised by parents, that action is taken immediately.

> Discussions with the PTA is held if an amicable solution cannot be found.

> The district education office and state education department are informed of serious cases.

Most parents, he believes, will only take drastic action if their complaints are not attended to or issues are not solved.

“One father went into the classroom and slapped the teacher for punishing his son. Another, who is a police officer, threatened a teacher who suspected his son of theft. But these are isolated incidents.”

He urged school administrators to provide parents with full details of what’s happening in the school.

He also advised parents not to confront teachers directly and to see the school head if there’s an issue concerning their child.

Association Against Parental Alienation Kuala Lumpur and Selangor (Pemalik) supports the implementation of the code because teachers must be protected or they will be afraid to do their job.

Pemalik president R. Ravishanker thinks the code should also include a standard operating procedure (SOP) for dealing with children of single parents.

Sharing how one parent in a fit of anger, had kicked the pots in a headmaster’s office after one pupil was allowed to go home with the other parent, he said it was very unfair to the school.

Forcing teachers or the school to make such decisions exposes them to abuse. Our educators must not be dragged into conflict, he said.

“But what should a teacher do when one parent begs to see his or her child for 10 minutes? If the teacher allows it, will he or she incur the wrath of the other parent?”

He said there have been many cases where a parent brings the police to the school, resulting in the teacher and headmaster being caught in the middle. Such situations can become emotional and tense very quickly, he said.

“The NUTP’s code of ethics should include situations where single parents - whether it’s those with or without custody, want to visit their child. What are the documents these parents must have with them? How much discretion should the school have?”

Lawyers Friends’ for Life (LFF) is helping the NUTP to look into the code’s legal impact.

LFF treasurer Haliza Abdullah said the non-governmental organisation comprising practising lawyers, is in the midst of preparing an opinion for the NUTP.

But the code, she said, has no legal effect until it’s implemented by the ministry.

“The system regulating education must benefit all parties. We’re concerned about the rising number of cases involving teachers and parents who are not able to settle matters arising from disciplinary action taken by the school.”

She said LFF is approaching the Women, Family and Community Development Ministry for input on how the Child Care Act would relate to the code.

“We are supporting the code because it’s a way of telling the public that seeking a remedy in court is not always the best solution.

“Understanding responsibilities and accountabilities is more important especially when it relates to education.”

Malaysia Crime Prevention Foundation senior vice chairman Tan Sri Lee Lam Thye laments how parents today are overprotective. Parents, he said, must be made aware that their child has misbehaved, or has disciplinary issues.

“Definitely we need a code because it can prevent misunderstandings that could land teachers in court.

“Discipline in school is crucial but parents and teachers must be on the same page. In many cases, parents think their kids are well behaved so they get angry when punishment is meted out.”

The code, he said, must spell out the SOP for teachers faced with problematic kids.

Discipline is the joint-responsibility of parents and teachers. So, once a parent is made aware of their child’s misbehaviour, they must not deter the teacher from doing his or her job.

If teachers have to constantly worry about being sued, their morale would suffer and eventually, they will stop caring. Lee recalled how the teaching profession used to be held in high esteem and how parents would support teachers when disciplinary action was taken against their child.

“Now, if the parent is a big shot, he will immediately call the ministry to complain. Parents must respect teachers, otherwise how can they expect their children to do the same?” he said.

If teachers are not protected, the school system would not be effective in educating the younger generation, he concluded.

“Teachers are either asked to settle it themselves, or apologise. When teachers punish a child, it’s in the media. But when it’s the other way around, teachers suffer in silence.”

He said the situation has gotten from bad to worse with more and more teachers feeling frustrated because no one is standing up for them. Some parents, he said, would get aggressive and take matters into their own hands.

He said it’s vital that the code is accepted by parents otherwise it would serve no purpose. But having a code alone, is not enough. The government must restore respect and integrity to the teaching profession by setting up an independent commission to look into improving the education system.

“If my grandchildren are reprimanded by a good teacher I would say ‘thank you’, because I know they are doing it out of love and care. Most parents nowadays don’t even ask their child what they did wrong to deserve the punishment.”

The Women, Family and Community Development Ministry has welcomed the proposed code.As a party to the Convention on the Rights of the Child (CRC), the government has the responsibility to protect children from any danger that can bring physical and mental harm to the child, said its deputy minister, Datuk Azizah Mohd Dun.

She said whatever form of punishment that is carried out, must be in accordance with the SOP so that the child is not harmed.

The recent ‘Cikgu Azizan case’ serves as an eye opener to all stakeholders on urgent issues that need to be addressed for the good of teachers, children, parents and the community.

“The code will help parents take a more disciplined approach to solving issues they are unhappy about. “This also sets a good example for their children. And, it will protect teachers by creating a harmonious relationship between both parties. This will produce positive results,” she said, adding that the ministry strongly supports any initiatives that are in the best interest of the child.”

No to abuse, yes to discipline 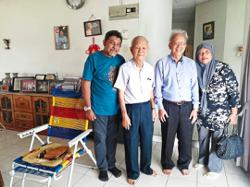