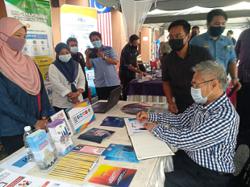 University of Liverpool Trauma and Orthopedics head of department Prof Simon Frostick (left) engages with the prehousemen during one of the short courses called, Training the Learners.

MANY youngsters harbour the dream of becoming doctors someday.

In recent years, Malaysia has seen the mushrooming of medical schools, with current figures standing at a total of 32, of which 11 are public and 21 private.

As the profession thrives, many hospitals find themselves at the receiving end of the boom in graduates as they lack housemanship positions.

Today, a medical graduate will have to wait a minimum of six to nine months, or even a year, before receiving his placement.

Not wanting their graduates’ knowledge and skills to wither whilst waiting for their postings, Universiti Malaya Medical Centre (UMMC) has taken the initiative to introduce a two-month pre-housemanship programme (PreHoP) for its graduates, which began on Oct 2.

“The hospital created the programme to sharpen our graduates’ clinical skills and knowledge during the waiting period.

“It also aims to give them real life experiences of a houseman, without having to rush back to their lecture halls.

“Each candidate will be evaluated and assessed according to the various departments and units they are attached to,” says UMMC deputy director (professional) Assoc Prof Dr Azura Mansor.

It took a year to plan and execute the programme.

PreHoP committee member Assoc Prof Dr Aizura Syafinaz Ahmad Adlan says the idea came about as each committee member contributed to teaching and was brought in by the mutual interest to train house officers.

“We work with housemen and after having to deal with some who possessed qualities not up to par, we decided it’s time to do something about it.

“With many medical schools that have sprouted over the years, there came a point where there were too many students who were passing out.

And just like rectifying any other issue, this one too, the hospital thought, should begin from within.

Universiti Malaya’s (UM) recent cohort of medical graduates were given a range of options to chose from, which took into consideration the period of time they wanted to be attached to the hospital for the programme.

“About 198 medical students graduated from the university’s medical faculty recently, of which 50 enrolled in the programme.

“They could choose to have either a long attachment varying from four to six months, or a shorter period of two months.

She says, the length of the programme is not an issue for the committee, as its main intention is for the PreHoP participants to be exposed to clinical skills and to gain valuable experience.

They even receive a stipend, she adds.

Dr Aizura Syafinaz says as the programme currently caters to their medical graduates, the committee is aware their capabilities.

“In their final year, they began shadowing housemen and carried out procedures in the ward. Thus, what they are expected to do now as pre-housemen is not foreign to them.

“It is purely a matter of continuing what they have studied, and to put that knowledge into practical use,” she adds, describing the programme as an on-the-job apprenticeship.

Participants have a choice of nine courses to chose from, some being medical, surgical and laboratory- based courses.

They, however, have to attend one compulsory course and that is the training for learners course.

“The short courses are held once a week, with different topics covered each week.

“PreHoP students can sign up for these short courses, and they can choose to attend all, if they want to.

“It is a way to refresh what they have learnt as students, besides preparing them for their real housemanship,” she says.

Dr Amani says the short courses are open to medical graduates from other institutions of higher learning to join.

A practical approach was taken when designing the short courses and it was created in relevance to the PreHoP students’ daily practices as housemen, says Prof Dr Azura Mansor.

“These include suturing and its different methods, how to cast a plaster for patients with fractures and the interpretation of patients’ results.

“We did not want to do a typically theoretical short course as we wanted something hands-on.

“It makes our course different from what is usually offered in other places and, the courses are prepared weekly for our pre-housemen,” she adds.

In the pediatric workshop for example, some of the things PreHoP students learn include fluid therapy, prescription and administration of medicine, and basic resuscitation and assessment of newborns.

For Dr Amani, the PreHoP programme reinforces a sense of responsibility among junior doctors that patient safety and care must not be taken lightly.

It is a good platform for them to be aware of these responsibilities, she adds.

In addition, Prof Dr Aizura Syafinaz says through the programme, directly and indirectly, PreHoP participants also learn how to handle work matters and how to communicate with colleagues.

Although the programme allows the participants to assist medical officers in carrying out procedures, Prof Dr Azura stressed that PreHop students are closely supervised.

“It is compulsory. Even though they are allowed to assist in procedures as well as certain clinical tasks, because PreHoP participants are not employed by the hospital, the credentialing and privileging is limited so as to enable them to perform procedures under supervision.

“The strict supervision balances the need to sharpen their skills and patients’ safety,” she adds.

Prof Dr Azura reiterates that they are monitored. The hospital even obtained temporary practising certificates for them which enables them to carry out only certain tasks.

We want our graduates to be in tip-top position in terms of skills and knowledge, she says.

“We just want to ensure that they do not lose the skills they have gained in medical school, while waiting for their posting,” Prof Dr Azura adds.

She says that the hospital has had queries on the programme from various parties, including overseas graduates.

“Since they are educated overseas, many are keen to get the local experience.

“Once the pilot project comes to an end, we will evaluate to see if it is feasible to open the programme to graduates from other institutions.We are open to ideas,” she says.

The programme is being carried out in conjunction with the hospital’s 50th anniversary celebrations next year.

The programme was created to sharpen the graduates’ clinical skills and knowledge during the waiting period, says Prof Dr Azura.

Prof Dr Azura Mansor says it is UMMC’s way of giving back to its alumni.

The programme is also part of the hospital’s corporate social responsibility project, she adds.

Realising the need to sharpen medical graduates’ skills before they become housemen, other organisations have also taken initiatives to conduct such courses.

MediCorp, under Medigrow Sdn Bhd, has been holding short courses since 2014.

“We provide a series of courses and workshop for medical graduates such as the pre-housemanship crash course which runs for two to three days. There are also short courses on obstetrics and gynaecology, orthopaedics and another one on medical emergencies.

“We also hold a presenting and clinical skills workshop which runs for half a day each,” says MediCorp principal trainer and manager Dr Siti Iliana Mohamad.

Dr Siti Iliana says, the programme is mainly catered to overseas graduates as they have a harder time adapting to the local working environment.

This is because of the differences in the healthcare system, she adds.

“Studies have shown that housemanship has led to reduced psychological well-being.

“The pressure to perform well, poor work-life balance and relationship with colleagues, are among the issues they have to deal with.

“Therefore, we try to address such issues by having courses to help the fresh graduates cope,” she adds.

To smoothen the process, MediCorp, which specialises in training medical graduates and junior doctors, instils the right attitude towards work by exposing the participants to real job expectations.

“Practising important clinical skills such as drawing blood, inserting urinary catheters, resuscitation of unstable patients, and reviewing cases during ward rounds, are covered in the course.

“We also guide them to be familiar with Malaysian Clinical Practice Guidelines on common diseases such as hypertension and myocardial infarction (heart attack) ,” Dr Siti Iliana shares.

Run by senior medical officers, training specialists and clinical specialists, the course sees on average the participation of some 80 medical graduates.

It is organised by the Postgraduate Medical and Health Education Society and House Officer Society Temerloh.

“As a specialist who trains and supervises young doctors, I have seen many housemen who are stressed and depressed, and with poor attitude. These emotions build up and they eventually resign.

“I hope through the programme that we started this month, will see medical graduates coping better as housemen and not leave it.”

Dr Ahmad Mahyuddin says the programme was held over three days and there are plans to run them on a regular basis.

“Some of the modules we cover include group discussions and practicals on the basics of resuscitation, common vital signs and blood result abnormalities, as well as blood taking and inserting branula using mannequin arms,” he shares.

He says the programme is limited to 70 participants because each of them will clerk and examine one patient.

Malaysian Medical Association (MMA) president Dr Ravindran R. Naidu says that true to the warnings from the profession about the proliferation of medical colleges, the Health Ministry is unable to absorb all graduates.

“The MMA started pre-housemanship seminars a few years ago, and we are glad to note that other responsible organisations are following suit.

“Certainly such courses may be very useful in preventing atrophy of knowledge and skills that can occur in prolonged waiting for work.

“In addition, such courses can help prepare young doctors, especially from overseas colleges, for the local working culture,” he adds.

He however cautioned that these courses must not become money-making ventures that exploit the young doctors.

On Oct 3, a local daily reported that the Health Ministry announced it will introduce a new programme called “tagging” for medical graduates who are waiting for their housemanship.

In the article, Deputy Health Minister Datuk Seri Dr Hilmi Yahaya was quoted as saying that the programme allowed graduates to follow and observe medical officers carrying out their medical duties at healthcare centres.

“It will be introduced next year as the ministry is still working on the guidelines.

“The programme will be carried out at hospitals and clinics that does not provide the housemanship course,” he added

Dr Hilmi said that while waiting to be recruited for housemanship, the skills, knowledge and interest of medical graduates might wane and this could lead to incompetency.

“Therefore, to maintain them (skills and knowledge) and to occupy their time, the ministry will introduce a programme called tagging,” he said.

Dr Hilmi however stressed that graduates were not obliged to apply for the programme.