Shooting for the stars

1 All ready: Avinaash aiming his shot at the basket.2 Support: Rajes (standing) is proud of Avinaash’s passion for basketball as it keeps him healthy and fit.

IF at first you don’t succeed, try, try again. That’s exactly what Avinaash Vasu did.

The 14-year-old, who fell short of making it into last year’s Jr. NBA All-Stars team, returned and succeeded in the 2015 try-outs.

Held in Malaysia for the second consecutive year, the Jr. NBA is NBA’s international youth development programme that promotes basketball participation and an active lifestyle among children.

The Jr. NBA Malaysia All-Stars also went on a unique NBA Experience in China. They were offered an opportunity to play against fellow Jr. NBA All-Stars from around Southeast Asia.

On being selected, Avinaash said he was excited and happy. “Having joined the programme last year, I knew what it was all about. So this time, I worked hard until I got it.” 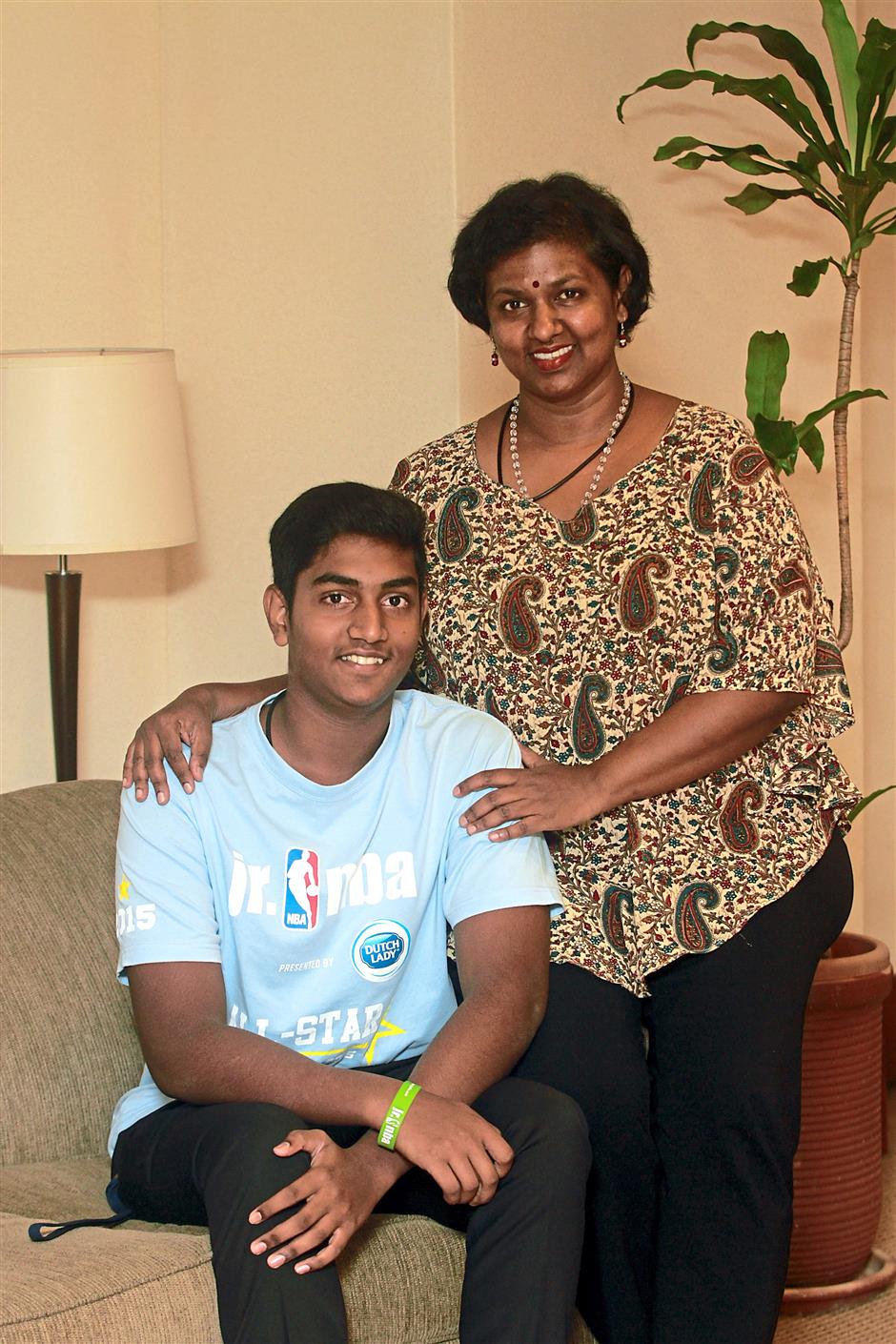 Support: Rajes (standing) is proud of Avinaash’s passion for basketball as it keeps him healthy and fit.

The teenager from SMK Seri Ampang, Kuala Lumpur, said he has liked playing basketball ever since his father bought him his first basketball on his sixth birthday. But he started being passionate about the game in Year Six. During the time, Avinaash said that his school held an inter-class basketball competition and his teacher made him team captain out of the blue.

During the selection process at the Jr NBA Malaysia 2015 National Training Camp, Avinaash said he picked up a lot of basketball skills from experienced coaches and NBA legend Darryl Dawkins.

He shared that he learnt crucial values when it came to playing in a team.

“The Jr. NBA S.T.A.R. values of Sportsmanship, Teamwork, a positive Attitude, and Respect are very important if you want to go far. But the most important thing is to have fun on the court.”

“It’s the same from Monday to Friday. I play basketball in school after classes. I go home and then I go to the gym. After working out, I go over to my tuition centre nearby. When I come home, I will revise some of my tuition work before I go to sleep. For Saturday and Sunday, I’m totally free for more basketball,” he added.

For other teenagers who aspire to make it into the All-Stars team, he said, “You should never give up. It’s hard to play in Malaysia, and I have lost many tournaments. Just believe, train every day and you will be able to make it.”

Being a big fan of Dutch Lady milk, he definitely scored big when he was offered one year’s supply.

“According to Dutch Lady, you should drink two glasses of milk every day but I drink more,” he said, adding that his favourite milk flavour is chocolate.

While getting into the Jr. NBA All-Stars team is an impressive achievement, Avinaash said that he is only getting started. “My dream is to play in the NBAs. I have to do this until I get there.”

His mother Rajes Muniandy is extremely proud of him. “He’s really determined. He told me that he wanted this. NBA is his plan A. This is what he is working for day and night, and I can already see it.”

“At the same time, he also concentrates on his studies. I make sure he balances both his studies and playing basketball.

“I encourage him to take part in school tournaments and I look for avenues where he can play and compete.”

Rajes said that sometimes parents need to help their child find their passion. “Let them do what they like. My son used to play other sports like badminton and football, but he finally found his passion in basketball.”

“His father and I will drive him to the venue early in the morning and make sure he gets his breakfast,” she said.

Rajes wants her son to be happy. “It’s his choice. Besides, playing basketball is healthy and it keeps you fit. I’m happy as long as he is happy with his career.”