Enthusiastic expeditioner: Dr Wong seen here at Casey Station in Antarctica. Her research has focused on the effects of ultraviolet radiation on polar, temperate and tropical microalgae.

Malaysian scientists make their mark in the icy regions of Antarctica and the Arctic.

WHAT strikes you first about Dr Wong Chiew Yew is her petite frame and soft-spoken demeanour. Her long, straight hair falls neatly, framing her gentle and kind face.

But these superficial observations are just the tip of the iceberg.

Dr Wong is one of Malaysia’s polar researchers and she means business.

As part of her doctoral work, she has been on three expeditions, starting with her first to Antarctica in 2002.

To get there, she flew to Hobart in Australia, and then sailed aboard the Polar Bird, which carried about 60 other expeditioners, for 10 days before reaching Casey Station, managed by the Australian Antarctic Division.

Christmas eve dinner and Christmas day lunch were celebrated on board and though the food was “fantastic,” most of the time she was too seasick to eat anything.

But she wasn’t scared or nervous.

“It never crossed my mind that something bad might happen. I was young and just excited and happy to see new things.”

The then 24-year-old remembers clearly laying eyes on her first iceberg - she says it was so breathtaking it made her forget her seasickness.

She returned to Antarctica in 2005 and then, with the Alfred-Weneger-Institute, went to the Arctic in 2008.

“The Arctic is quite different from Antarctica because we can see a lot of colourful and beautiful fauna. And unlike Antarctica, there was a library, recreation centre and even a pub in Ny-Alesund town.”

Dr Wong’s research so far has focused on the effects of ultraviolet radiation on polar, temperate and tropical microalgae.

While on the field, she collected samples and conducted experiments.

“It was fun to have penguins observing us while we did our sampling,” she recalls. 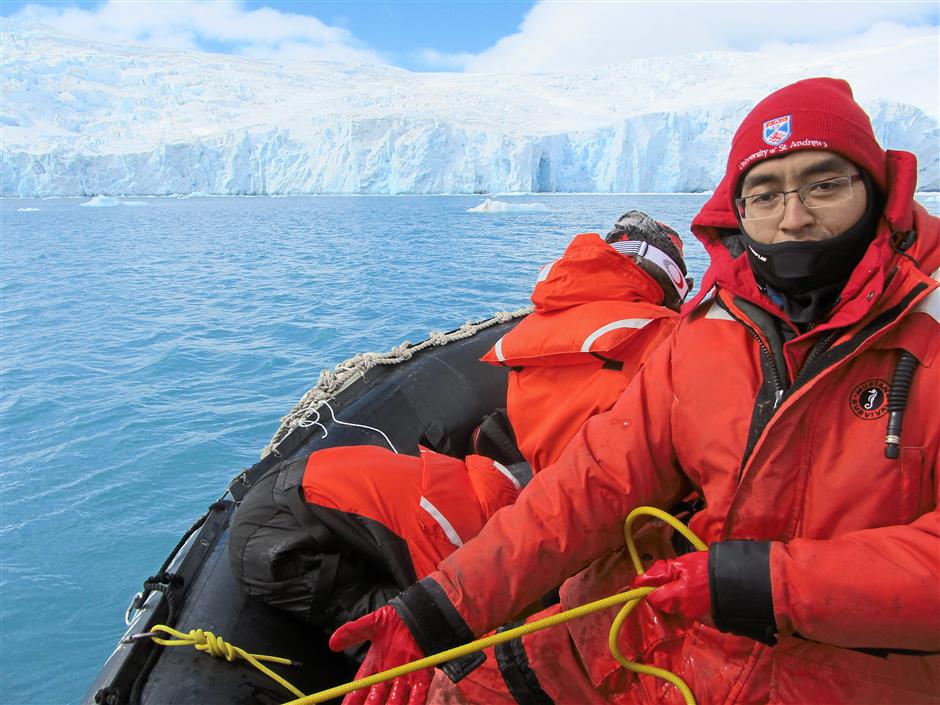 All wrapped up: Dr Wan Mohd Rauhan used his seven weeks in Antarctica to collect and analyse samples for his benthic community study.

Her studies found that the more ultraviolet radiation microalgae are exposed to, the more their growth is inhibited.

At the end of last year, Dr Wong, who has been with the International Medical University for the past two years, was awarded a grant from the Science, Technology and Innovation Ministry to continue her research.

Over the next three years, she will study the physiological and genomic responses of microalgae to climate change.

If there are to be any more expeditions, she says priority will go to her students who have never been to the region.

A researcher who is itching to return to the Antarctic is Dr Wan Mohd Rauhan Wan Hussin.

Though he was the only non-Korean and at times language was a barrier (“they could understand my English but not speak it back to me”), he enjoyed his experience there.

A highlight was when the entire station took two days off to celebrate the Korean New Year.

“The day before, everyone was busy with food preparation for the big day and most of us stayed up late. New Year’s day itself started with prayers and after that, we had an all-traditional Korean breakfast and played games until late.”

Like clockwork, Dr Wan Mohd Rauhan would rise at 7.30am and work from 8am to 6pm, at times continuing after dinner.

To break the monotony, he and fellow researchers would occasionally walk to the Antarctic Specially Protected Area to see the colony of penguins, or even hike up King Sejong Hill (as the Koreans called it) for the view.

“Spending all day in the lab made us crave for some fresh air. These trips helped lift our spirits and prevented us from becoming bored.”

Dr Wan Mohd Rauhan is a marine ecologist, studying animals that live in or on the seafloor, known as benthos (from the Greek word meaning ‘depths of the sea’).

While in Antarctica, divers would collect and photograph the samples for him to process and analyse in the lab - but not without difficulties. Just chillin’: Prof Wong hugs an ice block on the sea shore, on one of his four polar expeditions.

In his fifth week, he was only able to conduct fieldwork once.

Another time, one of the divers experienced decompression sickness after the first dive.

“We had no choice but to abandon the mission as there was only one diver left and he was not allowed to work underwater alone.”

His research found that glacier melting had adverse effects on the benthic ecosystem.

To the layman, the findings of Dr Wong and Dr Wan Mohd Rauhan’s work might seem inconsequential.

After all, Malaysia is so far away from Antarctica - how are we even connected to it?

This means that, whatever changes are happening in Antarctica, they act as an indicator for the rest of the world.

Secondly, microalgae and benthic organisms are at the lower end of the food chain.

In the case of microalgae, they are at the very base, and exposure to ultraviolet radiation reduces their nutritional value, particularly in terms of fatty acids.

“The beneficial fish oil that we consume comes from the fish that consume the microalgae with the fatty acids,” Dr Wong explains.

Benthos, meanwhile, are also an important food source for fish and play an important role in nutrient cycling.

Glacier melting causes sedimentation and changes to the water salinity, creating an unstable underwater condition which results in a reduced number of benthos in the area.

“The loss of benthos would eventually affect us, the consumer of fish,” Dr Wan Mohd Rauhan says, since it will also mean an eventual drop in the number of fish.

But glacier melting is not just going to affect our food resources.

According to the National Antarctic Research Centre (NARC), if all the glaciers in West Antarctica were to melt, the expected sea level rise will be about seven meters - enough to leave Alor Setar submerged.

Just this week, Antarctica made the news for reaching its warmest temperature on record - 17.5 degrees Celsius.

Dr Wong and Dr Wan Mohd Rauhan are not the only Malaysians conducting important polar research and though Malaysia is a young global player in this field, the number of researchers has increased significantly over the last 10 years, says Malaysian Antarctic Research Program (MARP) national biological science coordinator Prof Dr Clemente Michael Wong.

“We now have an enthusiastic and talented pool of scientists, both from public and private universities, and we have also observed a surge in the number of Antarctic research papers by Malaysians.”

MARP was set up in 1999, the same year that the first Malaysian expedition to Antarctica took place, consisting of four scientists from Universiti Malaya (UM).

In 2002, NARC was established in UM to coordinate the research activities of MARP members.

“We hope to get Malaysian scientists to lead multinational research projects in the coming years,” says Prof Wong, whose current polar research explores why and how Antarctic yeast can survive and grow in extreme cold conditions (and why tropical yeast cannot).

Previously, the molecular microbiologist, who is based at Universiti Malaysia Sabah, studied Antarctic bacteria.

Additionally, Malaysia has won the bid to host the 34th SCAR Biennial Meetings and 2016 Open Science Conference in August next year.

Since 2012, the Sultan Mizan Antarctic Research Foundation (YPASM) has been providing funding in the form of fellowships, research grants and berth support.

He adds that there are more interested researchers than resources available.

“Many researchers want to go. But we can’t fund everyone.”

The foundation receives a yearly matching grant from MOSTI, but Mohd Nasaruddin is calling on the private sector to lend their support too.

Speaking on the future of Malaysian polar research, he says it would be good to have our own station in Antarctica.

“It would mean that we can bring an unlimited number of researchers, studying a wide range of topics, to Antarctica.”

For the time being, it may be more cost effective to collaborate with nations that do have stations.

“Building and maintaining a station is expensive. And right now, we don’t have enough people to man it. So it’s not a sustainable option. For now, we can concentrate first on building up our researcher base.”

The growth of this base is dependent on Malaysian youth, which is why YPASM conducts awareness and outreach programmes in primary and secondary schools that includes delivering lectures and holding contests.

For the first time this year, in collaboration with the Canadian-based Students on Ice, the foundation will be sending Malaysian students to the Arctic for two weeks in July.

Winners of the nationwide contest (four Form Four students and two teachers) are currently being chosen and will be announced in May.

“It’s important to encourage young Malaysians to enter this line of research, not just in terms of capacity building.

“Where there is new blood, there will be new ideas.”