For many, seeing blood can be a traumatic experience, let alone dead bodies in its most gruesome state, yes, maggots and all. Yet everyday, forensic expert Supt Leow Kam Soon goes beyond his fears to solve the most complex of crime cases.

Prior to joining the police force in Feb 1983 as a cadet Assistant Supt of Police (ASP), Leow was a forensic chemist with the Ipoh Chemistry Department for three years.

“As a forensic chemist, I had to accompany police officers to crime scenes to conduct investigations. So I wasn’t that much afraid when they put me in the Criminal Investigation Department (CID) and later, the Anti-Narcotics Department as a senior investigation officer.

“No doubt, I still had to get used to seeing blood, brains, and lots more, but that was part of the deal, so I had to deal with it,” he said.

Supt Leow graduated from Universiti Sains Malaysia with a Bachelor of Science degree (honours) in Chemistry and later obtained a Masters in Forensic Science from the University of Strathclyde in United Kingdom.

“I was inspired to apply for a job with the PDRM (Royal Malaysia Police) as my peers in the chemistry department who had also joined the force, said it is a greener path with better job prospects.”

His vast experience in the field of investigation and forensic chemistry led him to become a lecturer at a Police Training Centre, and was promoted in 2002 to head the Chemistry Division of PRDM's forensic laboratory at the Senior Police Officers College in Cheras, Kuala Lumpur.

Leow speaks about what it takes to become an expert in his field and other alternatives in the police force, if chemistry or crime investigation is not your cup of tea.

What does a crime scene investigator do?

Think CBS drama CSI: Crime Scene Investigation (minus the glamour) or Medical Detective on Discovery Channel rather than The X-Files.

The Criminal Investigation Department's (CID) main function is to collect and contribute legally admissible evidence to an investigating officer.

At the laboratory, all samples and evidence gathered at crime scenes are examined carefully, some of which using sophisticated instruments. The results are then compared with an existing databank so as to establish the identity of the suspect.

I remember being the investigating officer of a major kidnapping case in 1987 where eight people were arrested. I was literally awake for two weeks helping with the evidences. You have to be extra careful when it comes to kidnap cases because the victim is still alive and any wrong move may jeopardize his life.

Murders are treated as high-profile cases but after a while, you tend to get used to seeing dead bodies with brains spilled everywhere and body parts of victims chopped into 18 pieces and scattered everywhere. For a fresh officer, such an experience can be very eerie, so before attending to such cases, they are exposed to photographs of dead bodies in order to avoid getting into a state of shock.

A forensic scientist generally conducts crime scene and laboratory examinations. However, a forensic science expert in the Chemistry Division has the additional duty of presenting the evidence in court.

With the current advancement of technology, DNA testing is being done more often to identify an unknown body or the profile of a suspect. Only specific ranks of officers are authorised to obtain DNA samples.

A ballistic examination includes firearm identification and distance determination. The Drug Fire system is a computerised ballistic identification system that is used to compare bullets and casings recovered at a crime scene.

The Malaysian Automated Fingerprint Identification System is also an essential part of an investigation. Fingerprints are usually taken from the crime scene and of the suspect. The system has an existing database of all previous suspects and convicted criminals and can match new fingerprints to determine if they belong to a recurrent law offender.

Investigations of computer-related crimes by its forensic unit include hacking, e-mail abuse, copyright, and piracy. Virus attacks on computer data and information theft are among the latest criminal activities that now needed more serious attention.

Apart from forensic science in the CID department, what other areas can one explore in the police force?

The general functions of PRDM include maintaining law and order, preserving peace and security, prevention and detection of crime, apprehension and prosecution of criminals, and procurement and dissemination of security intelligence.

Of course, those who are on the go would most likely enjoy the job of a CID officer as your duties will cover commercial crime, serious crime, anti-secret society, criminal intelligence, property crime, forensic science, and court prosecution.

Working in the narcotics department is quite motivating as well because you get to see immediate results. It's like a chain reaction – put away more addicts and there will be fewer petty theft cases. The job also includes joining forces with international enforcement agencies to combat illegal drug trafficking.

It's exciting when you have to decide whether you should cut the supply or its demand.

Being in the Special Branch requires you to monitor any situation or organisation that is a potential threat to national security.

The management department handles recruitment, training, promotion, and discipline in the force, among others.

Regardless of which department you are in, an officer is on call 24-hours a day. Although they work on shifts or during office hours they can be called back to work at any time of the day, when the need arises. There is no such thing as getting paid overtime.

What qualifications do you need?

The minimum entry qualification for constables is the Sijil Pelajaran Malaysia (SPM). For an inspector, you need at least an STPM or diploma, after which you will receive six months of training. Only those possessing an Honours degree can be considered for the post of a Cadet Assistant Supt (C/ASP). Upon completion of the one-year training, a cadet is automatically promoted to an ASP.

Unlike other careers where size and age does not really matter, interested applicants have to make sure they are able to meet these criteria.

To apply, check for advertisements in the newspapers published once a year for the post of C/ASP and twice a year for inspectors. Head to the nearest district police headquarters with your certificates to obtain an application form.

The yearly intake for C/ASP is less than 30 a year. Selection of candidates is based on the need of the force, which differs from year to year.

Out of thousands who apply for various posts, only a quarter are chosen at every intake.

For those really interested in joining the force, it would be good to start working with other government services first as it would be considered a continuation of service when you join the police force and therefore, will not result in any pay loss.

Generally, anyone with any area of qualification can join the police force. For example, a law graduate can become a court prosecutor; a science degree holder can be assigned to the forensic department, while an accountant can be useful in the commercial crime unit. However, you are not allowed to choose which department you want to join as you will be assigned based on your area of qualification.

Are there education opportunities?

Those serving the force can look forward to a number of short and long courses in institutions of higher learning both locally and overseas.

Short courses are conducted at the Police Training Centre and the National Institute of Public Administration (Intan), and in countries such as Britain, the United States, Australia, Japan, Thailand, France; the duration vary from two weeks to three months.

The International Islamic University and University Sains Malaysia have opened up a certain number of places annually to those from the force, while Universiti Kebangsaan Malaysia and Universiti Malaya are offering Diploma in Police Science and Diploma in Scientific Investigation programmes respectively.

Masters and PhD programmes can be done abroad and upon completion, officers are bonded with the Government for four and six years respectively. The Government provides for everything including the cost of the programme, expenses for your family such as lodging and allowances, and you still get your monthly salary.

What about career advancements?

Promotions are based on performance and recommendations from superiors. The Inspector-General of Police (IGP) has the final say and promotions are not time-based.

In terms of getting transferred from one unit or division to another, the police force follows a job rotation system where an officer cannot be assigned to the same job for more than five years.

What sort of personality best suits careers in the police force?

In the case of a forensic scientist, he has to be impartial in his findings and be able to conduct accurate analysis. He has to be honest and competent in handling samples of cases.

As for a police officer in general, I believe one has to be brave enough to rise up to risks and challenges.

Succeeding at solving a case. It requires a lot of teamwork, sometimes involving over 30 officers, so the senior officers would treat the team to some teh tarik at a nearby mamak stall. That's how we celebrate.

And the worst part?

There's nothing really unbearable or bad that can be classified under “worst part of the job”. However, it can be highly stressful when you are handling a very sensitive case, or one of public interest, such as the murder case of 22-year-old account executive Noritta Samsudin. A lot of pressure is on you and your findings plays a big role in influencing a court's judgement.

What is the income range?

The starting pay for an inspector is RM1,730 (inclusive of basic income and allowances), and RM2,466 for an ASP.

Intrinsic benefits are aplenty when it comes to serving in the police force. There are opportunities to travel locally and abroad on Government sponsorships. A good circle of friends made out of professionals, managers, businessmen, and developers also comes with the job.

But most importantly, there’s job satisfaction because you’re serving your country and seeing that justice is done to those who harm its peace and security. 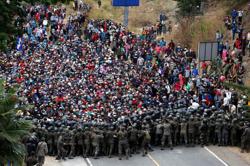