ALL-ROUNDER Looi Yi Wen is an opera singer, while Elena Aisha Azizan is a Scrabble wizard.

Both are this year’s recipients of the prestigious International Baccalaureate (IB) diploma scholarship given by the International School of Kuala Lumpur (ISKL).

“It was during my driving lesson that I received the phone call. I immediately steered towards the bus stop to take the call,” said Yi Wen who was pleasantly surprised.

As for Elena, she had good reason to be optimistic. “The interview ended on a positive note and I took that as a good sign of winning the scholarship,” she said.

Asked how she celebrated after receiving the good news in March, Elena said: “I cut my hair to signify the transition from a school student to a college teen!”

A former student of SMK Convent Bukit Nanas in Kuala Lumpur, Yi Wen was voted Best Speaker at the Datuk Wira Debate last year. Having a way with words, she also writes for The Star‘s BRATs programme.

“I aspire to become a lawyer one day and champion human rights, especially in Third world countries. There’s still a lot that needs to be done in these countries and I believe it is my responsibility to initiate the change,” said the 17-year-old.

For Elena, the scholarship brings her a step closer to achieving her ambition of becoming a doctor.

“Upon completion of the IB, I intend to pursue a medical degree in the United Kingdom and then set up my own clinic in Indonesia,” said the former SMK Sri Hartamas student.

Apart from being actively involved in the Cadet Society, Elena also represents her school in Scrabble competitions. Both Yi Wen and Elena scored 8As in the recent SPM examinations.

The IB selection committee reviewed applications submitted by 15 Malaysian students and short-listed six candidates. From the shortlist, the committee, assisted by Dr Zubaidah Aman from the Education Ministry (Private Sector), picked the winners.

“The ISKL board of directors approved the concept of the scholarship scheme in August 2001 as a means of expressing our appreciation to the Government of Malaysia for the help and assistance they have provided to ISKL over its 37-year history,” said school head William Powell.

ISKL has been offering the IB annually to two Malaysian students since 1991. The scholarships are for two years and are worth over RM50,000 per annum for each student.

“The scholarship is a golden opportunity. I would not be able to pursue this programme here if not for the award,” said Yi Wen.

On her success in balancing studies and extra-curricular activities, she said: “I did not attend tuition classes so I had time for other activities. I relied mostly on understanding the lessons and studying on my own.”

Elena attributed her success to her supportive parents and a wisely-crafted timetable.

Despite their busy schedules, both girls find time for hobbies and wholesome pursuits.

Yi Wen has always found music and singing to be “a great way to let up stress”. She has been with the Operafest Children’s Choir for five years and holds a Grade 7 piano certificate.

“I have performed in various parts of the country, including India last year. We will be participating in a choir festival in Montana, in the United States, this July,” said the soprano singer.

Planting marigolds and watching them bloom is Elena’s favourite pastime. “I love gardening because I love flowers; marigolds, because I don’t have to pamper them,” she said.

Elena’s girlish demeanour belies the fact that she takes up Thai kickboxing twice a week.

“I enjoy it very much. I don’t believe you need to confine yourself to being girlish just because you’re a girl,” said the spunky teenager, who has three brothers, aged 23, 20, and nine.

Though they come from different backgrounds and have their own dreams and ambitions, Yi Wen and Elena have one thing in common – they don’t spend time in front of the “idiot box”.

“Both our parents do not subscribe to Astro. I guess if you don’t have it, you won’t miss it and will somehow find other more productive things to do,” said Yi Wen who has two brothers, aged 15 and nine.

“I hardly watch television as I’m more influenced by my parents who emphasise reading a lot,” said Elena.

Excited to begin classes in August, the duo said though the diploma programme sounded difficult, they are prepared to work hard to succeed. 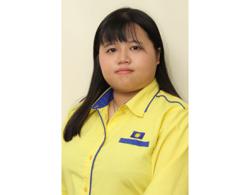