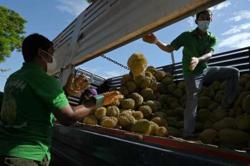 Lo dressed as vocaloid Hatsune Mike during an outdoor photoshoot.

ON WEEKDAYS, Cheryl Lo attends lectures just like any other university student.

But weekends are another matter. Her routine includes donning a wig, applying make-up, wearing coloured contact lenses and putting on a costume.

You guessed it; Lo is a cosplayer.

“I love everything about cosplaying,” said Lo, better known as Ying-Tze in the cosplay fraternity.

“I enjoy making costumes of my favourite characters as much as I like going for photoshoots and events.”

Hailing from Kota Kinabalu, Sabah, Lo is an internationally acclaimed cosplayer and is reputed to be one of the best costume makers.

She has been a judge in several cosplay competitions locally, as well as Singapore and Indonesia.

Lo discovered cosplay in 2005, through a magazine.

“I was always a manga (Japanese comics) lover. When I was very young, Internet access was not readily available, so we bought manga comics.”

At the bookstore, she would always pick up the latest copy of Gempak, a Malay manga magazine published fortnightly.

“In one of their issues, they featured people dressed up as anime characters and that was how I found out that cosplaying is a popular hobby in Japan,” she said.

“I will never forget that birthday. My parents had a costume tailor-made for me. It was Nanao from Bleach, one of my favourite characters then,” said Lo.

Today, she does not buy costumes or allow others to make it for her — she sews them herself from scratch.

“I wasn’t satisfied with the quality of costumes bought online. That is why I decided to make my own costumes,” she said.

This led her to learn sewing.

“My aunt taught me how to make patterns and use a sewing machine,” she said.

“It is important to know how your costume will look in 2D before you start cutting the fabric,” she said.

She now makes around three new cosplay costumes every month.

Lo claimed that she has to like an anime character enough to be able to invest time and effort in completing the costume.

She is especially proud of one of her creations showcased at Anime Festival Asia (AFA) in Singapore last year — the costume of Queen Esther from Trinity Blood.

“I made it during my final examination in 2013. I had to revise and at the same time make three different costumes for my AFA appearance, ” she said.

Lo is especially happy when someone notices how much painstaking work she has put into her costumes.

However, when asked whether she wants to become a professional cosplayer, Lo replied in the negative.

“Cosplaying is my passion but it is just a hobby.”

Lo dreams of becoming a costume designer in Hollywood.

“Have you ever watched Lord of The Rings and Game of Thrones?”

“The scenes are so majestic such that I want to be the person who designed those costumes!”