The reunion ended with a group photo of the Class of 1978 and 1980 with their teachers.

IT HAS been 36 years since they left school but the girls of Convent Bukit Nanas (CBN) never lost their school pride.

After years apart, close to 90 former CBN students of class 1978 and 1980, including 19 teachers got together for a reconnection programme at Halia, Sime Darby Convention Centre recently.

It was a walk down memory lane for the women as they recalled some of the precious moments shared in school.

They also used their time with one another wisely, by catching up on each other’s journeys in life, thus far. 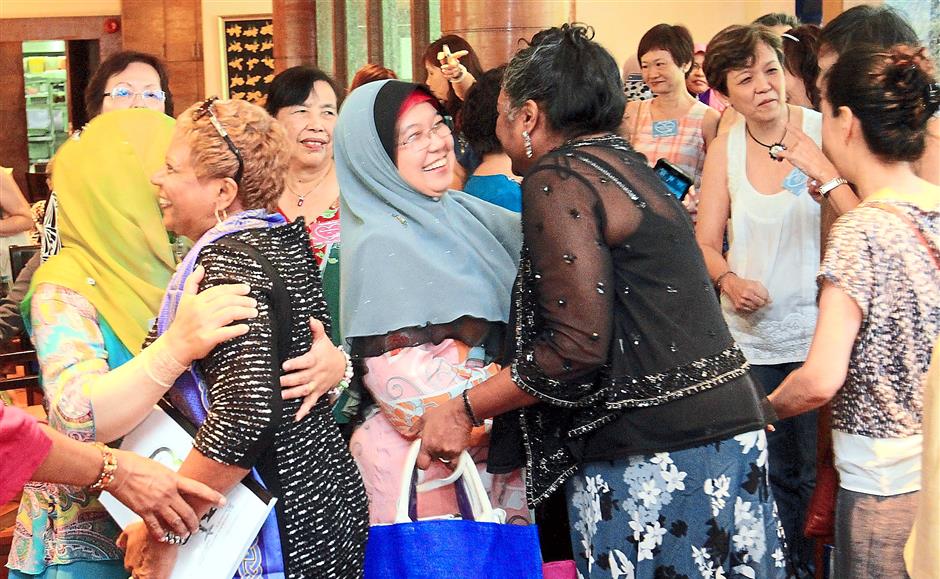 Former students showering each other with hugs and kisses at the reconnection programme.

As the event began, each were given name tags, to be easily identified by their former classmates and teachers.

Shouts of joy, hugs and kisses were exchanged as more and more former classmates showed up.

It looked like the women had travelled back in time, and were the 17-year olds they once were.

Organiser and former student Jennifer Lim said that with the help of Facebook, she was able to search for her classmates and initiated what she calls a ‘reconnection programme’.

“Back in the days, keeping in contact was only possible through home phone numbers and letters, which in time, changed as students moved to other states and overseas,” she said.

The reconnection programmed began in 2006 and the link grew over the years to an estimated 90 classmates. Some of the former CBN girls with Indrani (seated).

“Some of us have been in contact through social media but I thought that it would be a good idea to have a get together,” she said.

Lim said this wasn’t the first meet but it was the biggest gathering to-date.

“We celebrated our Golden Girls, a 50th birthday celebration together a few years back, and some had even travelled to Singapore in search of other classmates and teachers,” she said adding that some of them also held a small reunion four years ago at a teacher’s home.

The mega reunion was special to them all and it was evident as many travelled from near and far.

Some flew all the way from England, Papua New Guinea, Australia, Hong Kong and Thailand.

The event was both exciting and heartwarming for the ladies as they kept each other entertained with stories and played games. In those days, prefects were elected by the students through a election campaign. Those campaigning would create badges and get voters to wear them.

They also sang their school anthem, which to their surprise, most still knew the words to, after all these years.

Some even brought old school mementos they had kept throughout the years, and among them was an old Standard One report card, school badge and their school magazine to show one another.

To keep up with each other’s lives, some also brought family photos.

Norhaini Sabaruddin shared that she remains proud to be a student of CBN.

“We had lots of activities in school and there was never a dull day. Walking down memory lane, some former CBN students brought their school badges and even their report cards to the event.

“We used to have charity week where we sold food and the proceeds would go to the Spastic Centre, and we also had elections in school for prefects,” said the former netball player.

Among the teachers who attended the event was Indrani Manuel, who was the school’s headmistress from 1977 to 1993.

She said that the women had not changed much.

“These girls have all grown up, some wives, mothers and even grandmothers.

“Time has passed but they have not lost the gist of life and remain as vibrant as ever,” she added at the event.

Family & Community , Convent Bukit Nanas , reunion , class of 1978 and 1980 , former students and teachers , get together