You can run but you can’t hide

Pay up: Special discounts are being offered to those who pay their traffic summonses by Dec 31. — Photo by IZZRAFIQ ALIAS

Pay up your traffic summonses or risk being blacklisted by the Road Transport Department (JPJ).

This stern warning from Kuala Lumpur City Hall (DBKL) is directed towards motorists who have yet to settle their traffic summonses.

From January until now, DBKL had issued 956,068 traffic summonses but only 10% had been paid.

The summonses issued range from RM50 to RM300 per ticket, depending on the traffic offences, and the uncollected amount totals up to more than RM40mil which can be used to fund DBKL projects.

Only a small amount of people paid this year, totalling up to only RM2.8mil.

Enforcement Department director Mohd Sauffi Muhamad said DBKL would go all out to blacklist traffic offenders who fail to pay their traffic summons.

“JPJ had upgraded the blacklisting system to accommodate a larger amount of traffic offenders in Kuala Lumpur. 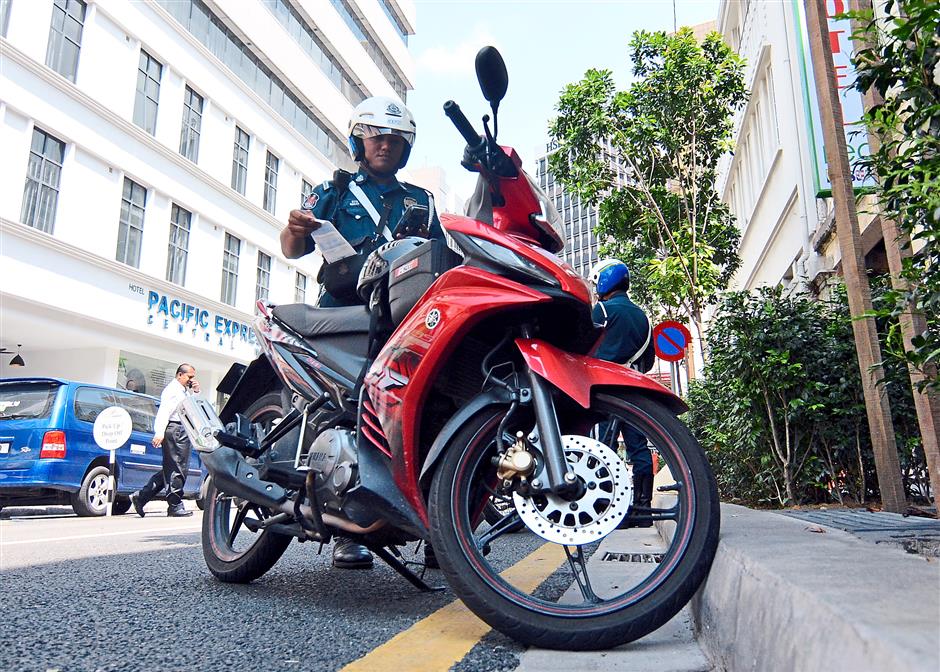 A DBKL officer issuing a summons to a motorcycle parked on a yellow line along Jalan Hang Kasturi.

“Those who have been blacklisted will not be able to renew their road tax or driving licences.

“We are sending a reminder from time to time to traffic offenders to pay up,” he said.

According to a statement from the City Hall’s Enforcement Department, the collaboration with JPJ to blacklist traffic offenders started since the amendment to the Road Transport Act 1987 in 2011.

Details of the vehicle owners will be obtained within 24 hours after the traffic offence was committed and this effort had prompted some traffic offenders to come forward to pay their summons.

Until October, some 3,346 cases had been referred to JPJ to be blacklisted.

DBKL will refer more traffic offenders who have not paid their summons since 2011 to JPJ to be blacklisted, starting next year.

DBKL will take legal action against traffic offenders with outstanding summons from 2011 onwards, and these motorists face paying the maximum compound.

The traffic offences include illegal parking, traffic obstruction, park without a coupon, stop on yellow boxes and violating the traffic lights.

The lack of enforcement is one of the main reason why some of the traffic offenders refuse to pay their summons but were only obliged when they were blacklisted. 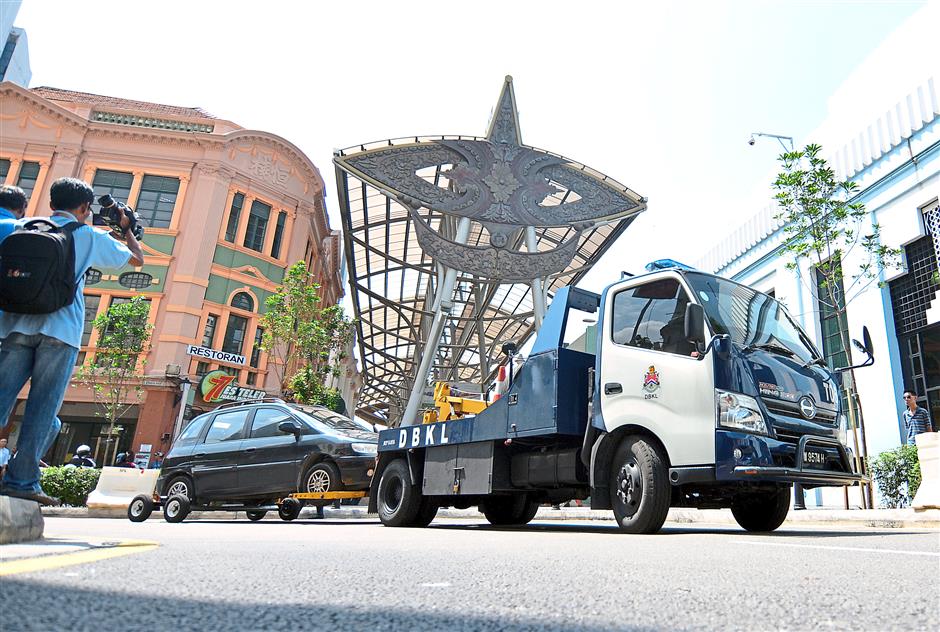 A vehicle being towed away by DBKL for parking illegally by the road side near Pasar Seni.

However, most motorists also urged the authorities to improve the city facilities such as increasing parking spots and enhancing infrastructures.

A motorists, who wanted to be known as HK said he had an outstanding summons dating back to 2012 but did not feel the urgency to pay.

“The summon states I have obstructed traffic but I was not sure where to pay the summons and I have not received a letter from DBKL.

“Morever, I think DBKL should provide more parking spaces for motorists,” he said.

When ask about the improved blacklisting system, HK said he was unaware of it and would make payment immediately, online.

Another car owner who wanted to be known as Ginnie said she also had an outstanding summons since 2012 too for traffic obstruction.

“Motorists double park because there is a lack of parking space or the parking charges is too exorbitant in the city centre.

Another motorist, who refused to be named, said he had three unpaid summonses but refused to pay them.

“I do not care about the summonses as it does not bother me now. I will only pay when I am blacklisted,” he said.

Sauffi said the amount of summonses issued was staggering, because the existing number of parking bays could not accommodate the increasing numbers of vehicles entering the city.

“According to Malaysian Institute of Road Safety Research (Miros) survey, there are two million vehicles going in and out of Kuala Lumpur, daily.

“There is only a limited space for all the cars and last year alone, we issued more than a million traffic notices,” he said. 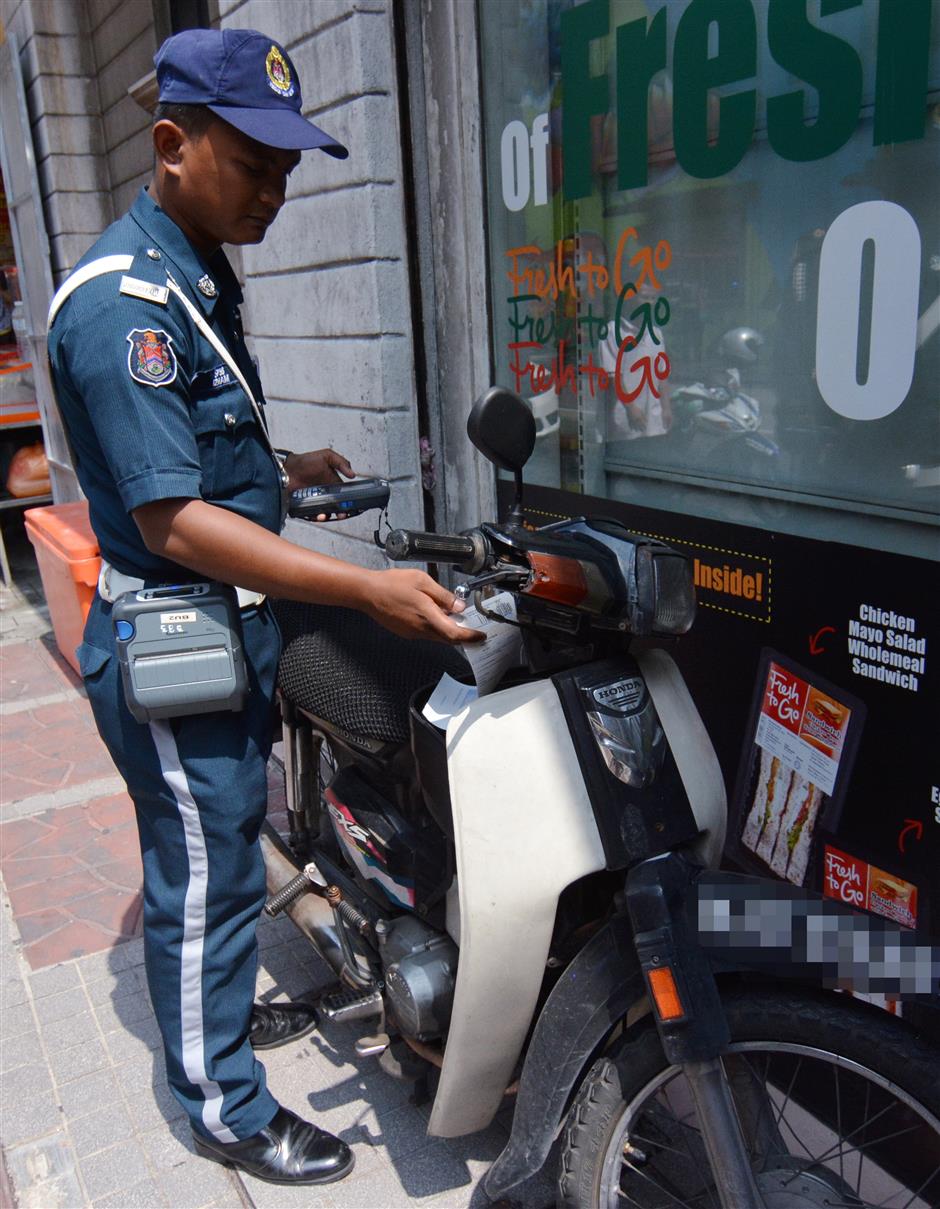 A DBKL officer issuing a summons along Jalan Hang Kasturi.

“It is indeed a challenge to educate the public to respect the law but we hope that through this, stricter implementation of blacklisting, more traffic offenders will come forward and settle their summons,” he said.

To encourage motorists to pay their dues, a special discount is being offered until Dec 31.

Since the initiative started in August, DBKL has collected RM1,806,590.

The discount being offered is RM30 for motorcyclists, RM50 for cars, and RM100 for offences involving heavy vehicles

Motorists can pay their traffic summons at either Pos Malaysia counters, DBKL payment counters or online at MyEG.