Despite seeing a slight improvement in the one-way loop (OWL) system on its second day, a large number of motorists and the general public were still riled up as confusion reigned.

Besides local residents, motorists coming from elsewhere such as Klang, Kuala Lumpur, Subang Jaya and Shah Alam were mostly frustrated over the one-way system.

Although Petaling Jaya City Council (MBPJ) had stationed more enforcement officers along the one-way loop and even enlisted the help of traffic police yesterday, road users were not appeased.

Motorist T.Rani said the situation was confusing because the old road signage was not removed while the new ones were not helpful with directions.

“I was in front of the MBPJ headquarters in New Town and wanted to go towards Jalan Selangor, I had to drive a big circle to my destination. And there was no way to exit to the Federal Highway (Kuala Lumpur-bound) from Petaling Jaya Hilton,” she said.

Yesterday morning, she was stuck for 20 minutes in Jalan Universiti.

“Both Jalan Gasing and Jalan Universiti were abnormally congested.

“I hope the authorities will monitor the traffic condition on roads that are indirectly linked to the one-way loop such as Jalan Universiti.

“They also need to remove the old road signage immediately, or at least cover them up, and put up more signage for the new one-way route,” she said.

He said the council must seriously consider the implications of the one-way road towards connecting roads such as Jalan Universiti.

“Motorists from Subang Jaya would normally use Jalan Utara to head to Universiti Malaya Medical Centre. Now they are required to take a different road but there is lack of information on this. There is no signboard to indicate where they need to turn,” he said.

He said public transport users and pedestrians were not spared from the chaos. 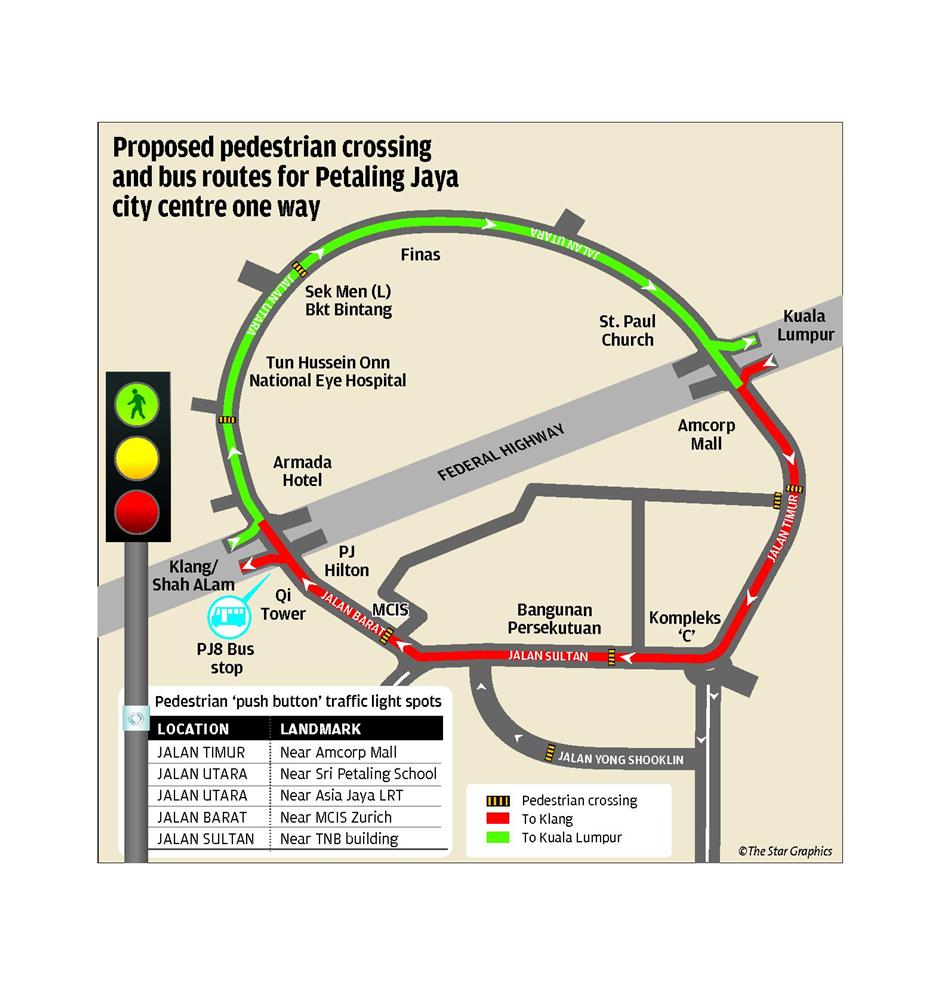 “Yesterday, it was harder than usual for pedestrians to cross the roads along the one-way loop,” he noted.

Based on StarMetro’s observation, motorists did not slow down for pedestrians along Jalan Utara.

Without pedestrian crossings along Jalan Utara, where traffic lights have been shut down, schoolchildren endangered their lives crossing the road after school which now had five lanes.

Most parents were upset that MBPJ enforcement officers were not controlling the sudden surge of vehicles that were weaving from one side to the other as parts of the road median were removed, thus making it dangerous to cross the road.

In Jalan Timur, closer to Amcorp Mall, some motorists were seen weaving to the right as part of the road median was removed and this resulted in annoyed drivers blaring their horns.

Even public bus drivers were confused as the ramp going up to the PJ Hilton bus-stop was closed.

Passengers were forced to walk further down to the highway to catch a connecting bus for their onward journey. There was no bus shelter at this de facto bus-stop.

Office worker Samantha Hui said she understood that the loop traffic system was on a trial run but felt that the council’s planning was inadequate and basic amenities were not in place.

“As much as MBPJ wants to improve the traffic congestion, it must give high priority to pedestrians. We need zebra crossings in Jalan Utara, near the Tun Hussein Onn Hospital, in Jalan Timur in front of Amcorp Mall and in front of SM Bukit Bintang for the safety of students,” she added.

Roger Chang from Klang felt the one-way loop posed numerous potential dangers. “The slip road from Federal Highway towards Section 14 does not look safe to me. Road barricades were placed to prevent motorists from turning right towards Petaling Jaya Hilton.

“Cars were moving very fast and I felt a bit nervous slowing down to turn left,” he said.

Gurdwara Sahib Petaling Jaya visitor S.S. Muker said it took him 45 minutes to get to the temple from Wisma Thrifty in Jalan Barat.

He urged MBPJ to educate its enforcement officers on the route and landmarks.

“Previously, it would take me five minutes from Wisma Thrifty to Jalan Utara. On Sunday the enforcement officers could not tell me how to get to Gurdwara Sahib, which is a well-known landmark in Petaling Jaya. I had to take a long drive to find my way to the temple,’’ he said.

A parent of a pupil at the German School Kuala Lumpur, who declined to be named, said she was uncertain if Lorong Utara Kecil beside St Paul Church was a two-way road.

“In the morning I could not use Lorong Utara Kecil to get to the school. However, in the afternoon I could. This is really confusing.

“Many parents were late dropping their children off in the morning because of the chaotic situation.

“I hope the authorities will keep Lorong Utara Kecil a two-way street,” she added.

A spokesman from MBPJ said Lorong Utara Kecil will remain as a two-way street. Lorong Utara B is one-way and motorists can exit by turning right towards Jalan Utara.

Istara Condo resident G. Krishnan said in the morning he could drive out through Lorong Utara B towards SM (L) Bukit Bintang and Section 14.

However, he could not turn into Lorong Utara B from Jalan Utara despite driving on the correct lane on the one-way street.

He was worried they would all fail because there was a lack of new route signage and the old ones were not covered.

“The one-way loop may have its benefits.

“However the road signs are very important and the implementation process must be flawless. The parents of my students were very angry because they did not anticipate their children having to drive on the new route for the exam,” he said.

The one-way system has affected businesses too. A petrol station operator in Jalan Utara, who did not want to be named, said sales dropped by 60% on Sunday.

Based on a statement issued by MBPJ, Jalan Yong Shook Lin has been reverted to the original route. However the one-way loop will remain.

Time for motorists to get used to new traffic flow