The jetty in Kuala Sepetang where the fishing boats dock. Photo by FOONG PEK YEE.

IT was a very hot afternoon in Kuala Sepetang New Village on a Tuesday recently and hardly any tourists were around.

But boatman Tan Bok Bian was not taking it easy. He was literally chasing after my friends and I when we approached a jetty where a few fishing boats were docked.

He politely handed us a brochure on the types of tour packages offered by his friend’s company.

Life has never been the same for Tan, 40, after he took up the part-time job as boat driver three years ago.

The father of three said he had been catching prawns for a living for more than two decades.

His wife is doing accounting work to help supplement their family income.

Tan said his friend had asked him to help in his tour business three years ago and he was very glad to take it up.

“I can do something when I am not catching prawns.

“This is better than sitting around and doing nothing,” Tan said.

He said whether full-time or part-time, jobs were hard to come by in the new village or elsewhere, especially for villagers with little formal education.

But the otherwise quiet fishing village saw a change for the better in the last three years, thanks to the growing interest in ecotourism.

The villagers are literally reaching out to the world after their younger local leaders helped them in their tourism promotions, including setting up websites where tourists worldwide can make online bookings.

“This week, we are getting some European tourists,” said Tan with excitement written on his sun-tanned face. Salted fish drying under the sun.

Kuala Sepetang New Village is in the Larut Matang District.

It is about a 100km drive from the Simpang Pulai toll in Ipoh, heading north and using the Changkat Jering exit.

Tan said a lot of the tourists, local and foreigners alike, were attracted to the natural surroundings, including the village.

The boat service operates between 8am and 7pm daily, he added.

Meanwhile, villager Chuah Tiong Kowi, who was busy cleaning fish, could be seen occasionally staring across the road where a row of coffeeshops were located.

The third-generation owner of the Chin Seng Heng sundry shop also sells fresh and dried marine produce in front of his shop.

“Business is good because there are many tourists these days. “There are so many things to see here,” he said, before spelling out the many tourist activities in Kuala Sepetang such as birdwatching, dolphin sighting, eagle watching, firefly watching and enjoying the beauty of the mangrove forests.

Tiong Kowi, 47, said there has been a huge increase in tourists since a year ago.

This, he added, was also good for his business because the tourists also liked to buy marine produce, especially fish and prawns.

“Our catch is always fresh. You can pay first and come and collect after you finish your tours,” Tiong Kowi said, adding that his shop closed at 9pm daily.

The villagers are friendly and ever willing to strike a conversation with strangers.

I would say the way of life in the village is also equally captivating, especially for those who like the social, cultural and historical aspects of places and people.

Kuala Sepetang was known as Port Weld, and had the first railway line in the peninsula, linking it to Taiping. 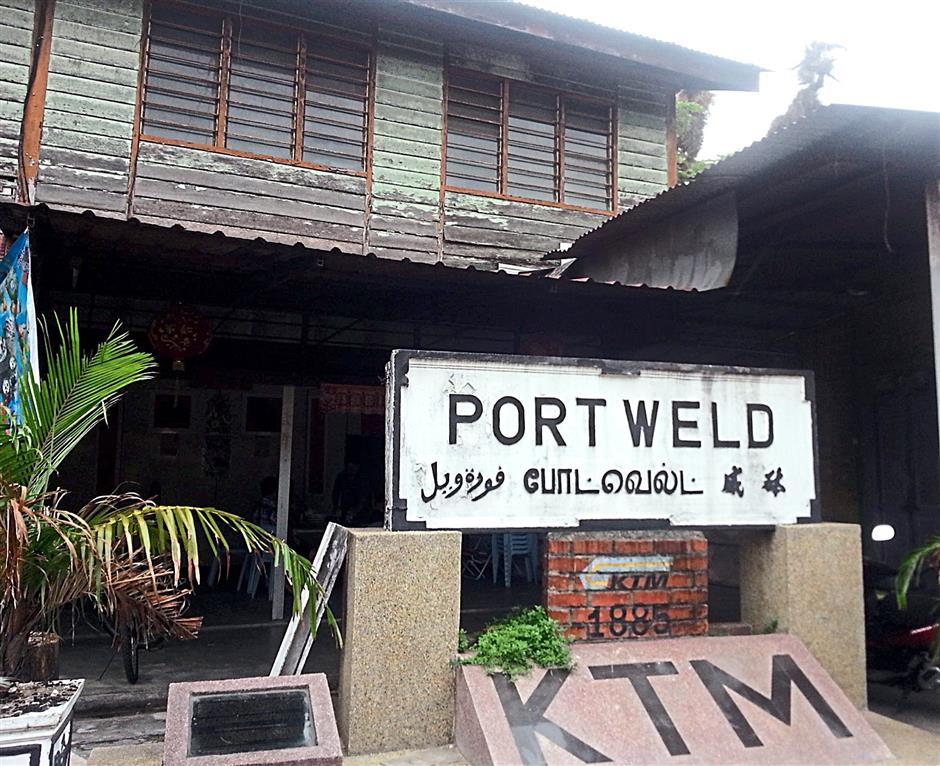 Kuala Sepetang was known as Port Weld and had the first railway line in the peninsula, linking it to Taiping.

The railway line, which took a year to complete, was operating between 1885 and 1941 to transport tin from Taiping to Port Weld before they were shipped to Penang.

But all that is left now is a plaque along the roadside where it was once a busy and important transit.

A brief history of the railway line was inscribed on the plaque.

I was told that many foreign tourists also asked why the Port Weld train station was not preserved as a heritage site.

A coffeeshop operator said business for him had improved in tandem with tourist arrivals, but not that drastic like that of those in the tour business because many of the tourists came in tour groups.

“The groups will have their meals in restaurants pre-arranged,” he added.

The operator said most of his patrons were locals.

“When the economy is good, the villagers are also in the mood to come out for food and drinks,” he explained.

But modernisation had also brought competition to the coffeeshops.

“There are people, especially the younger generation, who prefer to go for karaoke at night nowadays,” said the operator, pointing to an outlet across the road.

Competition aside, coffeeshops definitely have their old-time charm. Hoo Chang Weng, 71, said he would go to the village daily, to have his lunch and drinks at the coffershops and to chat with friends there.

Born and bred in the village, Hoo, who owns a charcoal factory about a kilometre from the village, had moved to Taiping.

“I will come to the village to meet my friends here after making my rounds in the factory in the morning,” said Hoo when met at a coffeeshop recently.

Hoo said promoting tourism was the best way to help the villagers and develop the economy.

“There is hardly any land for development for other economic activities in the village,” he said, estimating the village population to be between 5,000 and 6,000.

Hoo said life was hard for the villagers and this had been further compounded by the rising cost of living.

“Luckily, the cost of living in the village is still cheaper compared to towns and cities.

“The villagers can earn a bit more from tourism and having three meals a day is not a problem,” said Hoo, who has five children and 11 grandchildren, and none of them live in Kuala Sepetang.

The ecotourism development in Kuala Sepetang also has spill over effects.

The few charcoal factories along the road leading to the village are also interesting stops for tourists.

Chuah Cheow Seng, 70, was seen busy explaining the production of charcoal to a group of tourists.

He said his brother is the factory owner and he was there to help him.

Cheow Seng said the factory was set up by his father and it has been operating since 1942.

He said about 60% of their charcoal were exported to Japan.

And for Kuala Sepetang villagers, they are happy not only with the job and business opportunities that came with tourism; but also the fact that their humble village is getting more vibrant.

According to the villagers, there are at least 10 boats ferrying tourists nowadays, compared to only two a few years back.