SOME 50,000 customers of Mah Sing Group Bhd are expected to turn up at the two-day 20th anniversary celebration of the group, which will be held at its show gallery in Batu Maung, Penang, from tomorrow.

Group chief operating officer Teh Heng Chong said the group had invited some 50,000 of its customers in the northern region to attend the event.

“The highlights of the celebration include an Elton John impersonator from Australia, performers by the recent winners of the Astro Talent-Time Contest and a magician.”

The event will be launched by the group’s chief executive officer Ng Chai Yong.

“In two weeks, we will conclude the celebration in Kota Kinabalu,” said Teh.

The group will showcase approximately RM10.6bil worth of projects at its show gallery in Batu Maung during the weekend event from 10am to 6pm.

The projects include The Coastal in Southbay, Meridin BayVue in Johor Baru, Lakeville Residence in Kuala Lumpur and The Southville City in Bangi.

“We are, for example, selling the semi-furnished professional suites from RM581,800 onwards per unit.

“We have yet to fix the selling prices for the residential units and shoplexes,” he said.

The professional suites are ideal for start-up companies that do not require too much space, added Teh.

“It is our business strategy to price the properties affordably so that locals will not have problems in getting bank loans,” he said.

Beside these projects, Mah Sing will also display its other projects from across the country.

Some of these projects include the Garden Residence, comprising semi-detached and bungalow homes, in Cyberjaya, M City, a serviced apartment project, in Jalan Ampang, and D’sara, a commercial high-rise scheme connected to the MRT station, in Sungai Buloh.

On the contribution of Penang’s sales to the group for 2014, Teh said Penang would generate approximately about RM400mil to the group’s projected RM3.6bil revenue for this year.

In 2013, Penang’s sales generated about RM300mil to the group’s RM3bil turnover. 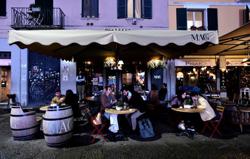