Two of the pipes used to pump water in Sungai Selangor at the former mining pool in Kampung Hang Tuah, Bestari Jaya.

Dr Ahmad Yunus, who is the executive councillor in charge of infrastructure, said if the mining pool became dry, there were nine others which could be used to pump water into Sungai Selangor.

“There are 20 mining pools in the area and nine have been declared safe,” he said.

However, when StarMetro visited the site recently, it looked like there was no more water in the pond and the underwater pumps could be seen clearly.

Dried earth surrounded the area, indicating that the water used to be quite a high level.

Excavators could also be seen operating in the area while lorries carried sand out. 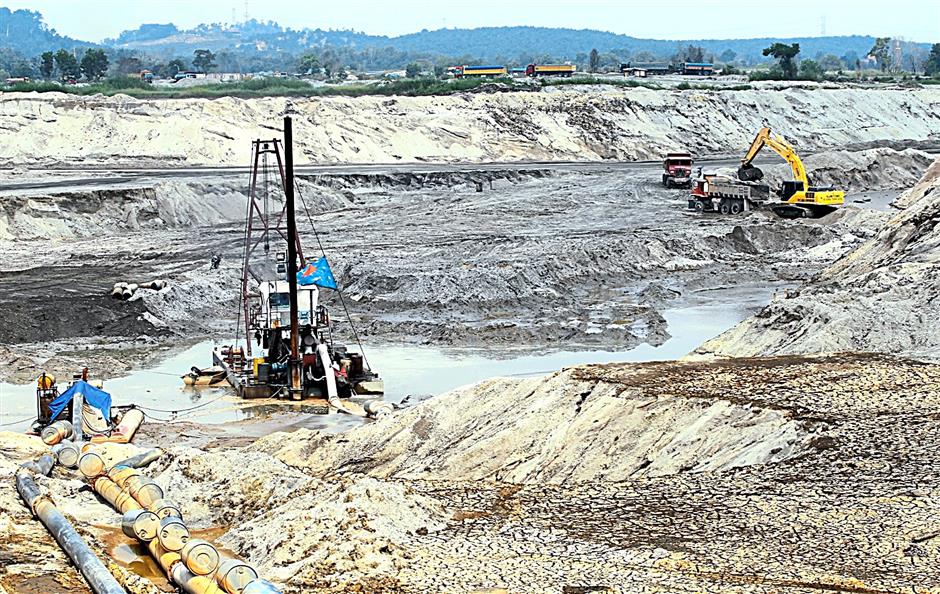 According to Dr Ahmad Yunus, the heavy machinery was due to the Hybrid Off River Augmentation System (Horas).

Horas is one of three projects the state government is carrying out while waiting for the Langat 2 water treatment plant and distribution system to be completed by 2017.

The Horas project is aimed at reducing the state’s dependence on one source of raw water and ensure uninterrupted water supply to more than seven million consumers in Selangor, Kuala Lumpur and Putrajaya.

Kampung Sungai Darah resident Nasir Nawi, 83, said the pumping of water from the mining pool to Sungai Selangor started about three months ago.

“The mining pool used to be filled with water, but it has dried up ever since the project started,” he said.

Dr Ahmad Yunus said the state government would “do what we can to ensure continuous water supply for residents.” Lorries carrying sand out of the disused mining pool. - Photos by AZHAR MAHFOF

One of the steps is to ensure licensed car wash operators in Selangor operate six hours daily from noon to 6pm.

He said the Selangor Government is expected to make an announcement on possible water rationing this week.

Dr Ahmad Yunus said the public would be informed prior to a possible rationing after the Selangor Economic Action Council (MTES) meeting on Thursday.

According to the Selangor Water Management Board (Luas), the water level at the Sungai Selangor dam is at 31.9%.

Selangor fixed 37% as “critical” during the last water rationing exercise, but has reduced it to 30% now.

“If the primary issue of water cannot be resolved, then the state government has failed as residents expected them to resolve water issues.

“I think Tan Sri Khalid Ibrahim should be allowed to complete his job as mentri besar without the issue being scuttled or hijacked because of a political agenda,” he said.

Dr George added there was a lack of standard operating procedures (SOP) for water rationing, especially since water levels are below the cut-off marker set in February to March of 37%.

“There is no SOP for water rationing such as a ban on domestic and commercial washing of cars,” he said.

“We (Cassa) have always stayed out of politics but in the consumers’ interest, we can no longer stand aside,” said Dr George.