School for people with special needs in financial difficulties

THE 27-year-old Sekolah Khas Klang is in dire need of help as it is currently facing tough times coping with its financial situation.

The school, which offers care, education and training for 150 children and adults, has been running in the red in recent years.

Lack of government funding and contributions have compounded the problem.

The school was built by Apec Clubs of Klang and Australia near Southern Park, in Klang, in 1987 and was officially opened by the then Sultan of Selangor, the late Sultan Salahuddin Abdul Aziz, in 1989.

She said the school had 14 employees, including two assistant teachers and two helpers.

“The children, aged from seven to 17 years, are offered school programmes at four levels before they get into the vocational training,” she said.

In recent years, he said, contributions in terms of cash had not been encouraging.

“The school’s only source of income is the RM100 school fee it receives from each child.

“The total fee will not even cover half of our monthly operating cost,” he said.

Ganeson added that due to lack of funds, the school’s swimming pool had been kept closed for several months.

As part of its long term plans, Ganeson said the school was cultivating fruits and crops on a plot of land in its compound as a means of generating additional income.

“The crops seem to be growing well and we hope we can get some returns from the harvest in future,” he said. 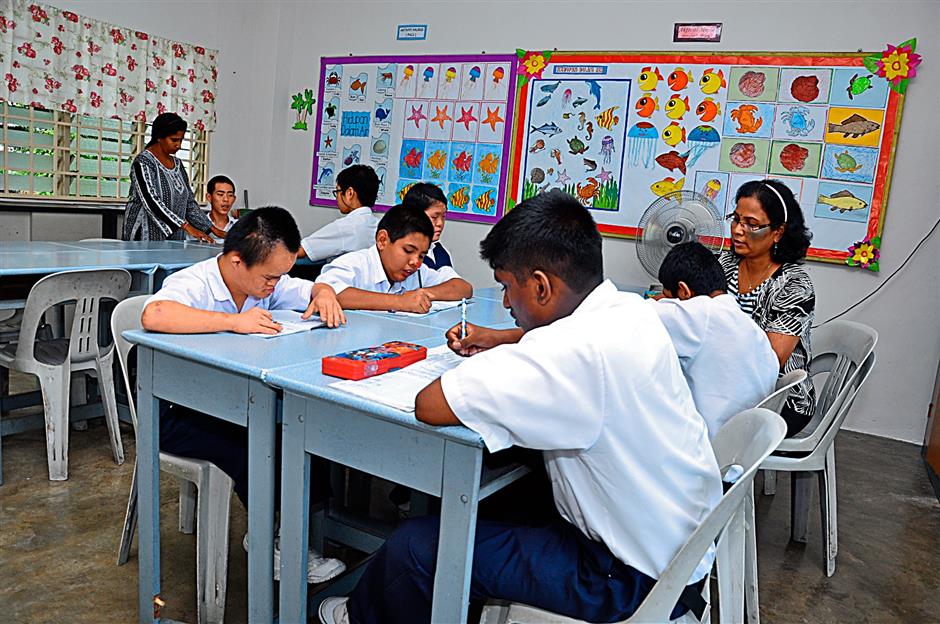 Children hard at work during one of their lessons at the school. The school provides education, training and care to 150 of them.

Besides seeking public donations, Ganeson said the committee had lined up two fund-raising projects in the near future.

“I would like to appeal to the public to lend a helping hand to the school and welcome any amount of donation,” he said.