IN SUBANG Jaya, there are seven Ramadan bazaar spots, with more than 300 stalls approved by the Subang Jaya Municipal Council.

Some bazaars are set up as early as 3.30pm on weekdays while others only begin operating after 4pm.

At about 4.15pm at the SS13/1 Ramadan bazaar, a group of women unloaded from their cars trays and containers filled with food and placed them at two stalls.

The women are sisters who run a restaurant together in SS15/4.

“Our restaurant, Restaurant D’ Zarifah, is open daily from 7am to midnight,” said Nor Fadziah Md Noor, one of the four sisters from Kelantan.

Nor Fadziah and her sisters sell traditional kuih-muih, rice as well as many types of side dishes.

“Most of our food is Kelantan-inspired and it is about the same that you would find in our restaurant,” she said. 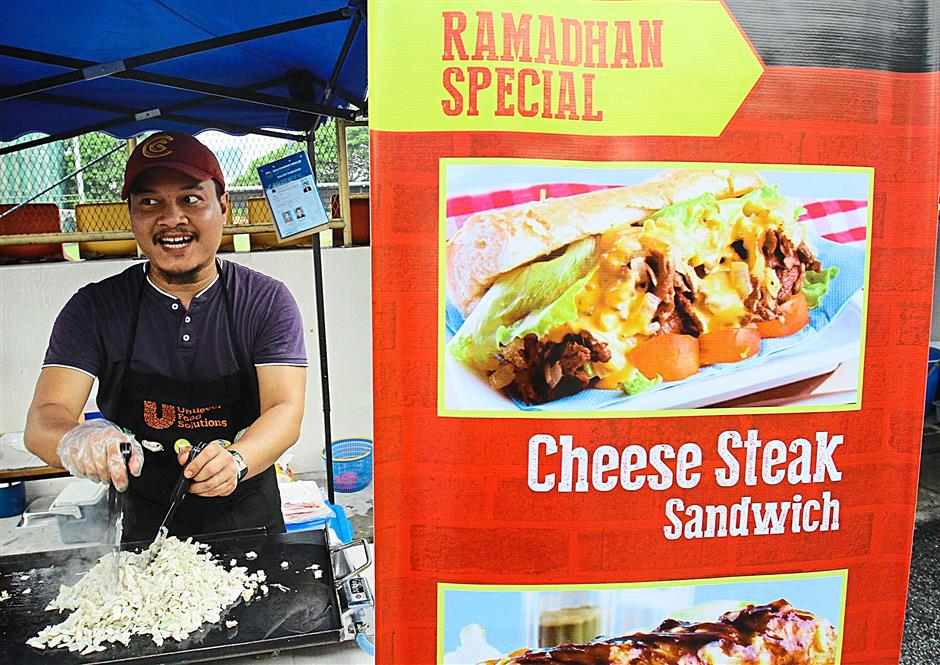 
There are about 20 different kinds of kuih-muih at their stall, including puding gula hangus (thick creme brulee), kuih lompat tikam, kuih dadar and kuih apam.

For dinner, they have nasi kerabu, chicken rice along with side dishes such as gulai darat, which is the Kelantanese name for lemak ikan tongkol, ayam percik, asam pedas, tom yam, and various vegetable dishes.

Nor Fadziah said they had been selling food at Ramadan bazaars for four years now.

“Initially, we were selling food in the Angsana Apartment in USJ 1,” she said.

Some of their regular customers paid their stall a visit when StarMetro checked out the bazaar.

To prepare for the Ramadan bazaar, Nor Fadziah said they would start cooking at about 8am and finished by 3pm. Most of the food sold by Nor Fadziah and her sisters are Kelantan-inspired such as nasi kerabu, ayam percik and tom yum. — Photos by FAIHAN GHANI


The dishes are priced from RM5 onwards while the price of the kuih-muih starts at 50sen.

Ramadan food is usually associated with local delights, so it is rare to see Western dishes at the bazaars.

At this particular bazaar, however, a stall selling Mexican-inspired delicacies has been set up by another family.

Their speciality is steak cheese sandwich and chicken enchiladas, a corn tortilla rolled around a filling of chicken, onions and peppers.

The stall was set up by Norbers’ Hot Wings general manager Noor Firdaus Abu Mansor and his brother, who man the stall while their employees take care of their restaurant in Plaza Shah Alam.

“This is our second year selling food at a Ramadan bazaar, the first was at Stadium Shah Alam,” said Noor Firdaus.

He said the family decided to open a stall in Subang Jaya instead of Shah Alam as they wanted to introduce their food here.

“We want to target a new market and draw people from Subang to our restaurant in Shah Alam.”

To make their dishes at the Ramadan bazaar, Noor Firdaus uses about 3 to 4kg of chicken and about 3kg of steak.

The enchiladas come with two types of sauce — hot and sweet-and-sour — while the steak sandwich is served with cheese sauce.

The cheese steak sandwich is priced at RM15 while the chicken enchiladas are sold for RM9.

Though he serves food out of the norm for Ramadan, Noor Firdaus said people were willing to swap rice for something else.

The smell of onions fried with chicken and steak on the hot pan was evidence enough that his dishes would attract bazaar visitors in SS13/1 Subang Jaya.