Dancing up a storm

Aghonderan (left) and Kavitha displayed excellent understanding during the first segment of the grand finals.

IT WAS a memorable night for businessman S. Aghonderan and graphic designer S. Kavitha after they were crowned champions of the Yuttha Medai All Stars dance competition.

The pair won the hearts of judges, which included Tamil movie star Jiiva, with their impressive performance in the final face-off with Denes Kumar and Danish.

When his name was announced, Aghonderan looked shocked and jumped for joy before embracing his partner.

They received a Toyota Vios TRD Sportivo each and shared RM30,000 in prize money.

“Kavitha was the live wire of our partnership.

“Making the final was an achievement and being crowned champions was something we had not expected. Jiiva (front, right), one of the judges, joining the dancers for a performance.

“We also have to thank our close friends and supporters who encouraged us from the start.

“It was not easy preparing for the competition as we had to make sure we practised regularly,” said Aghonderan.

The grand finals, held at the KRU Studio in Cyberjaya, saw five pairs of finalists going through several segments.

After the first round, Murugan and Naresh were eliminated.

Dharshaini-Magen were awarded fourth place and Kabil-Logaraj the third spot, setting the stage for a dance off between Aghonderan-Kavitha and Denes Kumar-Danish. 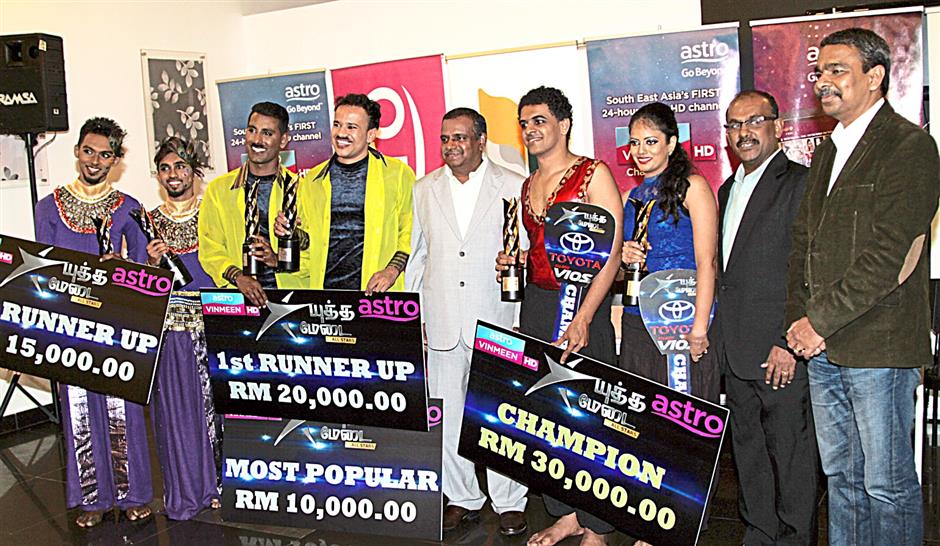 The top three winners with the organisers.

They also gained another RM10,000 as the Most Popular Duo, based on an online poll.

Denes, who is an actor and programme host, said they were grateful to their fans.

“They showed us so much love and support during the run-up to the grand finals,” he said.

The hosts — Vishnu, who is Singaporean, Magen and Nithyaswari — also put on a good show on the night.