jojo280214. caption not provided by writer

I HAVE been on the road filming my Letting Go international travelogue for almost eight months non-stop.

The series is about the various ways we can let go of stress in our daily lives through body, mind, soul and great food. I have covered such a diverse range of countries throughout the Asia Pacific, that I have enough experiences and memories now to last me a lifetime.

However, this doesn’t mean I have seen it all because you can never be done travelling unless you’ve covered the entire world.

Despite having been to roughly 13 countries in the last year alone, every country still brings something completely different to the table. There are always new treasures and new discoveries to unearth every single time.

Travel has got to be one of the best ways to celebrate the beauty of the resent moment because every step you take and everything you see is “new”. The writer posing with a young boy from Cambodia during her travels for the show.

From the weather to the unique street signs and change in landscape, it’s mind-blowing to think that a simple plane ride has the ability to open a door into an entirely different world, waiting for you on the other side.

Travel really transports us somewhere else, beyond our comfort zones from all that is familiar to brand-new sights, sounds, cultures and ways of thinking.

To keep abreast of my manic shooting schedule, my wardrobe has gone through some dramatic shifts to accommodate all the seasons from shooting in the blistering heat of the tropics to the snow-capped mountains of the Himalayas to the brisk cold of Tokyo’s fashionable winter.

Typically, I would return to Malaysia for sometimes only a few days, or a few weeks at a time, before embarking on my next adventure.

In October, I was underprepared for the cold weather when we were shooting with Tourism Australia. The days were deceptively sun-kissed and cold by nightfall, but it’s not the actual temperature that gets to you, as much as the wind factor. 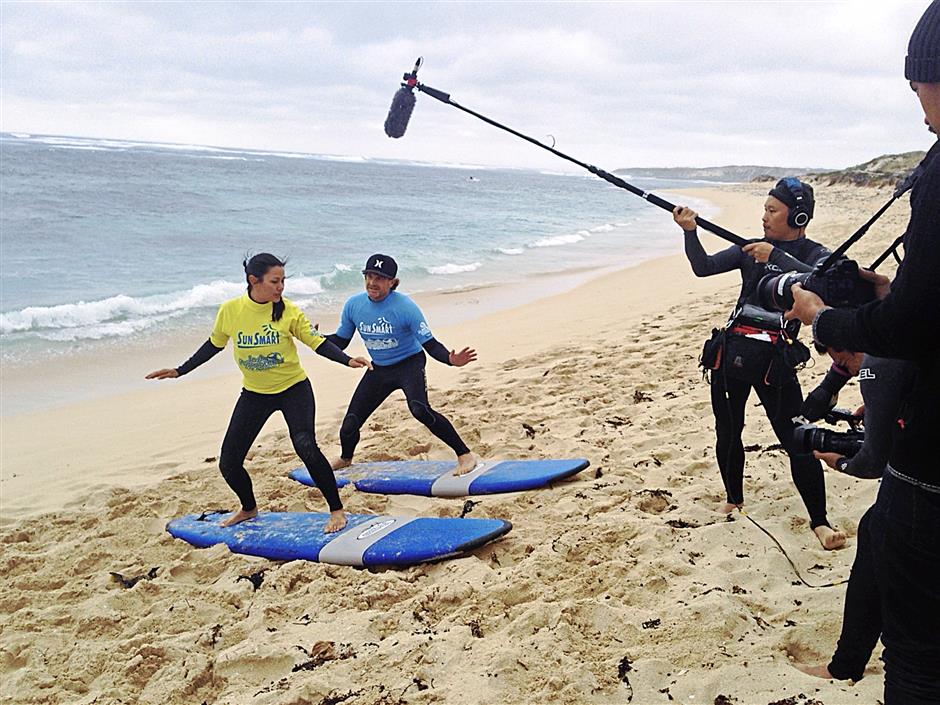 Learning the basics of surfing during her first lesson in Australia.

When we were shooting near the breathtaking coast of Southwest Australia, the wind whipped past us like a blast of cold air-conditioner, even when the sun was out.

I remember wearing two wet suits for my maiden lesson in surfing and I was shivering from the cold as well as fear that I might spot a “Great White” in the water. Thank goodness there was no such sighting while I was perched on my surfboard, and Western Australia as a whole was absolutely breathtaking to film.

It was as naturally beautiful in the great outdoors as was Japan so deeply cultural. Both Western Australia and Japan were spotlessly clean but so radically different in every way.

One country shook hands with a casual grin and “G’day mate!” whereas the other would bow profusely in formal greeting.

In December, I was in Japan, learning to roll sushi, stepping into the shoes of an apprentice geisha for the afternoon, and soaking my aching limbs into a glorious hot spring in the mountains, before learning the art of the samurai sword, which is steeped in honour and tradition.

In Bali, I found mental serenity amidst lush paddy fields and world-class spas. I felt spiritually cleansed when I bathed in the holy waters of ‘Tirta Empul’ in Ubud, meant to rid the soul of all negativity.

Bali lived up to its name, “Island of the Gods” where it’s not just a saying that there are more temples than homes in Bali. It’s actually a fact.

Age-old customs and beliefs seemed melded together with the locals’ culture and prayer was a part of their everyday lives.

In Cambodia, I felt like a real-life explorer amongst the ancient ruins of Angkor Wat, which brings out the “Indiana Jones” in all of us.

This amazing temple took more than 30 years to build and remains the largest religious monument on Earth.

The only mind-boggling thing about the temples in Siam Reap is that you almost have to pinch yourself when you get there because it looks like you have arrived in a lost kingdom or an “out-of-this-world” movie set, but it’s actually real and the historical buildings are still standing to prove this.

If a novice like me was already in awe of these structures, I’m pretty sure all the history and archeological buffs out there would be in seventh heaven.

In Bangkok, I felt like a human pretzel when I was twisted this way and that in my first-ever lesson in traditional Thai massage. It was incredibly stress-relieving.

On Koh Samui island, after checking myself into the serenely beautiful and relaxing ‘Kamalaya’ wellness resort for a retreat, I was placed in the ring for a lesson in muay thai with one of Thailand’s most renowned fighters. It was intimidating to say the least and I must have burnt half a thousand calories in that session alone.

To me, “Letting Go” is all about de-stress and living the moment and there’s a multitude of ways you can let go of stress in your life. Just find out what works best for you and now and again, travel to somewhere different if you feel like disconnecting from your daily routine and discovering something totally new.

Jojo Struys is a TV host/producer who is currently working with various tourism bodies in Asia Pacific for an international travelogue called ‘Letting Go’, which combines the art of de-stressing with travel. She is also the author of ‘Jojo Struys’s Guide To Wellness’.