THERE is definitely much to shout about for the Cheer Aces cheerleaders as they are all pumped up to take part in several upcoming international tournaments next year following their success in the Varsity Asia Cheerleading Championship Korea 2013.

Participating in a total of four cheer divisions, they won three gold, two silver and one bronze medals in the championship held on Nov 9 and 10.

Cheer Aces Academy founder and director Loh Kheen Ho, 24, said he was satisfied with the team performance despite having only one month to practise the routine.

“The team performed well and we scored very well in some criteria.

“We were also needed to perform back-to-back routines for different cheer divisions in two hours,” he said.

Topping the Coed Premier (level 6) category, the 24 boys and girls team Cheer Aces Kings started off with an energetic opening with a combination of basket toss, tumbling and low high sequences.

Then, they took to platform with deafening cheers followed by a maximum of 12 sets toss extension as well as four sets of pyramid.

Despite several mistakes, the difficulty of their stunts seemed to make up the points that propelled them to be crowned the champion, scoring an overall 71.3.

Kheen Ho said he and his coach choreographed the stunts according to the judging criteria in the score sheet.

“We watch a lot of videos on cheerleading stunts and we improvised the moves to enhance our presentation.

“This is the second time participating in the level six routine and we were confident of winning,” he said.

Meanwhile in the Coed Elite (Level 5), team Jacks scored an overall of 74.3 to top the category.

Cheer Aces flyer Celine Fan, 15, said she was tired after performing all the stunts starting with the Coed Partner Stunts, followed by Coed Elite, Coed Premier and All Girl Group Stunts category.

“Being a flyer of the team is very exciting and I am very happy to have won in several categories.

“I learnt a lot of teamwork in the championship and delighted that I managed to defend the All Girl Group Stunts title,” she said.

Kheen Ho also mentioned that they would be organising a tryout next month to select an All-Star team to compete in several major events.

“We are eyeing the Australian All-Star Federation Cheer competition and South-East Asia Cheerleading Open 2014,” he said, adding that the team inspires to represent Malaysia to compete in the annual International Cheer Union (ICU) World Cheerleading Champion-ship.

1st-runner Up- Cheer Aces A 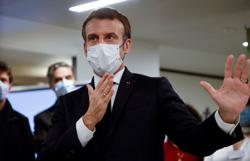