Hazardous: Motorcyclists have to sometimes seek shelter under flyovers, even if it is perilously close to the main road during heavy rains.

BEING a motorcyclist is not for the faint-hearted. Not only do they have to contend with badly maintained roads and careless drivers, the weather in Malaysia poses an added challenge with frequent and unexpected downpours.

Travelling has been made more dangerous because of the lack of proper and safe motorcycle shelters along major highways in the Klang Valley.

It is not an unusual sight to see motorcyclists having to take shelter below overhead bridges and flyovers, sometimes taking up an entire lane of the highway.

In 2003, four motorcyclists seeking shelter under a flyover from the rain were killed when a tipper truck ploughed into them near Bandar Sungai Long. The truck had rammed into the group of about 30 at the site, a kilometre from the Jalan Cheras-Kajang Highway toll plaza.

Highway concessionnaires say some major expressways are not built for motorcyclists, while existing shelters are often underutilised.

Motorcyclists are unhappy about the current state of shelters, which are insufficient and unsafe.

Pratap Mahalingam, 26, who regularly uses the North-South Express-way, said he had often been caught stranded on highways during downpours. 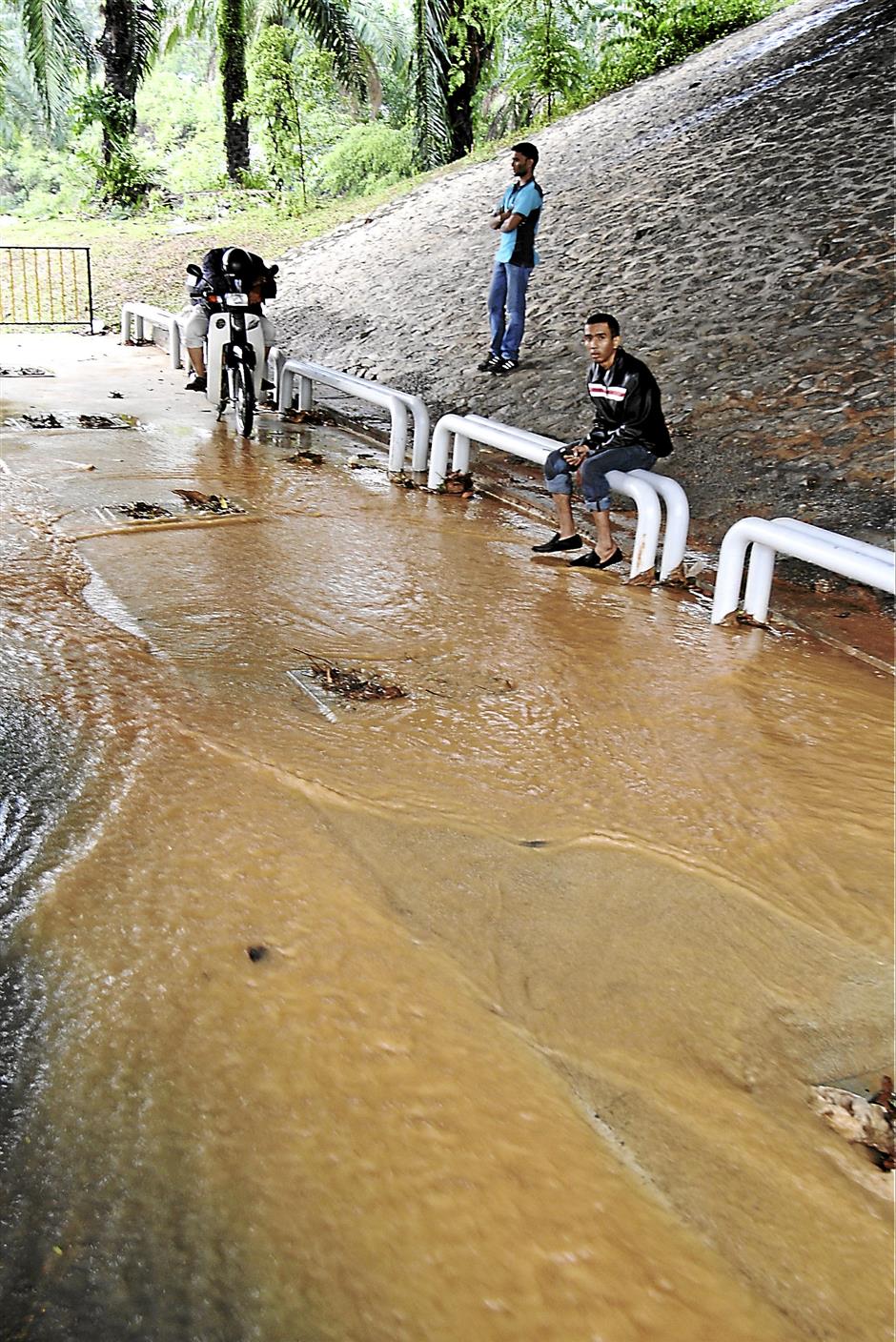 Although some highways do provide shelters, many are in a sorry state such as this shelter along the East West Link Expressway.

“I usually have to find shelter under flyovers or bridges if the rain is too heavy.

“Even though I have almost skidded a few times, I prefer to continue my journey as I feel it is more dangerous to wait under these ‘shelters’,” he said.

Actuarial executive Afiq Hamzah, 25, who travels 60km each way from Sepang to Bangsar daily, said shelters were few and far between.

“Although some highway concessionaires do provide space for us to take shelter, these are usually located too near the road, beside the extreme left lane.

“This lane is usually used by heavy vehicles and they sometimes have to swerve to avoid waiting motorcyclists.

“The situation becomes more dangerous when the shelter is too crowded and motorcyclists have to resort to parking their bikes by the roadside, sometimes taking up half the lane,” he said.

Mohd Izzul Iswat Mohd Azman, 25, echoed Afiq’s sentiments, saying that because these shelters were very near the roads, water from speeding motorists would splash on them.

“Motorcyclists have two options, either to find shelter away from the main highway via exit points or along the highway where they can find dedicated shelters and motorcycle bays. 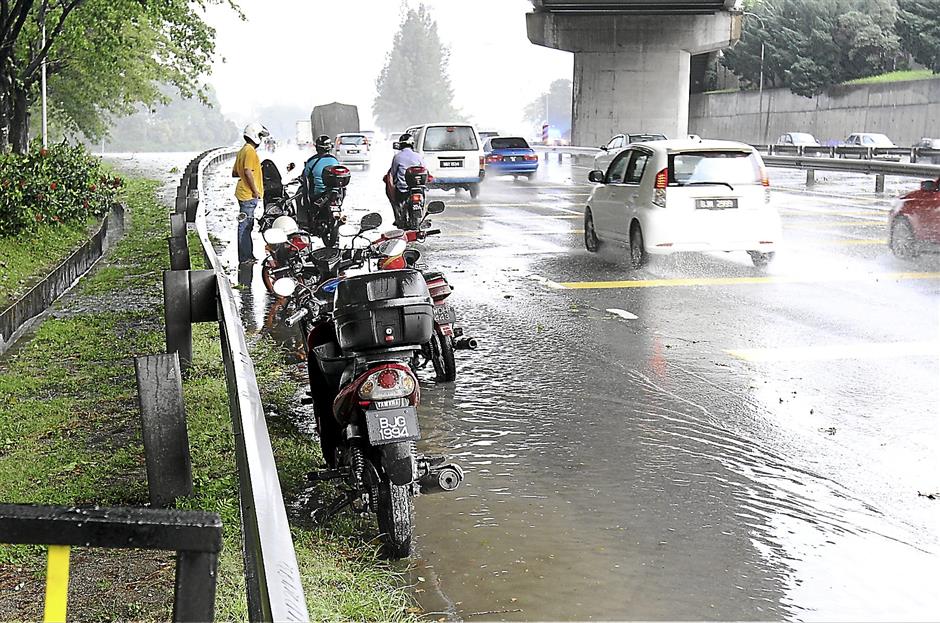 Motorcyclists are sometimes forced to seek shelter under flyovers during heavy rain, even if they are perilously close to the main road.

“There are proper entry and exit points, with bays located under the interchange flyovers.

“They have been constructed away from the road, with a kerb to ensure their safety and are regularly maintained to provide a smooth journey,” Sazally said.

A spokesman for Projek Lintasan Kota Holdings Sdn Bhd (Prolintas), the highway concessionaire for Ampang-Kuala Lumpur Elevated Highway (Akleh) and Kemuning-Shah Alam Highway (LKSA), said Akleh was designed for light vehicles and as such, motorcycle facilities were not available.

“In fact, the design itself does not allow us to build any shelters for motorcyclists.

“For LKSA, there are currently no shelter facilities for motorcyclists. However, we will be constructing them in the future.” 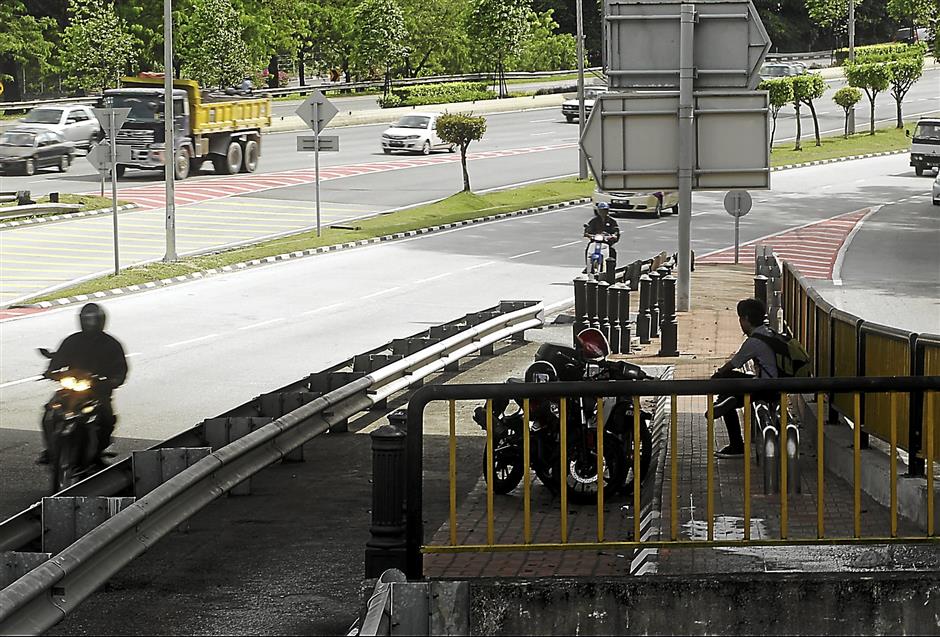 This shelter near the Jalan Parlimen flyover on the road leading to Jalan Mahameru is a good example of the type of shelters needed for motorcyclists.

“As NPE is an urban highway, there are many entrances and exits that lead to residential areas where motorcyclists can take shelter.

“There are shelters at Kuchai and Kampung Pasir that are underused as some motorcyclists find it inconvenient.

“For example, when travelling from Kuala Lumpur to Subang, motorcyclists can use the Kampung Pasir shelter but they prefer not to as they are not able to get back onto the highway and would have to be travelling against the traffic flow.

“However, there are shelters at the three toll plazas — Pantai Dalam, PJS 2 and PJS 5 — where motorcyclists can stop at during heavy rain,” the source said.

“Compared to a few years ago, there has been a definite increase in such shelters at strategic locations.

“At the same time, motorcyclists should also provide feedback on suitable locations for these shelters,” he said.