The Golden Bridge - Kuching’s next icon of harmony

Distinctive: The S-shaped structure with its lattice-like cable design is reminiscent of a traditional Bidayuh bamboo bridge. --ZULAZHAR SHEBLEE / THE STAR

KUCHING: The building of the Golden Bridge is hoped to further encourage integration between communities on both sides of Sarawak River.

Speaking during the launch of the project at the State Legislative Assembly (DUN) Complex here yesterday, he said due to the increase in population on both sides, there was a need for the bridge to be built and also for the government to encourage economic and recreational activities among the people.

“We (government) want to encourage this (assimilation) because the land in the north is more vast and suitable for recreational activities. On the south side, we want to develop the city with more new and beautiful buildings and infrastructure. However in doing this, it could add density and traffic congestion to the city.

“Therefore it is proper that we also encourage citizens to come over to the north side to de-stress from the hustle and bustle of city life.

“Also with this bridge, it would be easier to encourage people to leave their cars and walk. We want to maintain the balance in Kuching — those who want to enjoy shopping can go to the city’s south while those who want to engage in recreational activities can just cross the bridge to the north side,” said Taib.

He said the total concept of encouraging integration between communities in the north and south of the city was to have them communicate more with each other. This, in turn, would help amplify the friendliness between Kuchingites.

“This would look good to the tourists and would eventually boost the tourism sector.”

Another development highlighted by Taib was a Legacy Square concept which would be set up in the middle of city. According to him, the proposed square would be a hub for Kuchingites as well as visitors to enjoy arts, culture and other attractions in the city within walking distance.

“In the Legacy Square, we (government) attempt to rearrange all the city planning to have specific attractions like museums, art galleries and places that would show the best of our cultures. This may take 50 years down the road but we have it all planned out, with an intention to make sure that whatever we build would have elements of beauty that can be appreciated by the people,” he said.

The 400m pedestrian bridge, measuring 3.25m in width and looming 12m above the water, would span across Sarawak River from the DUN Complex in the north to the Charles Brooke Memorial near the iconic Kuching Waterfront viewing tower in the south.

According to Sarawak Economic Development Corporation (SEDC), the implementing agency for the RM35mil project, it would take at least 24 months to complete the bridge, or by the end of 2015.

The S-shape structural design was inspired by the meandering rivers in the state.

It combines the essential aspects of form and function.

Supported from the twin piers by suspended steel cables, the walkway would appear being held by a web of angled wires — reminiscent of the arched wings of a traditional Bidayuh bamboo bridge.

Its custom-designed floors would incorporate translucent non-slip glass sections engraved with distinctive motifs and images of Sarawak. It would have the gentle gradients to accommodate pedestrians, buggies and the disabled.

Two viewing decks, each measuring 30m by 10m, attached like a wing from each pier would allow pedestrians to stop and enjoy the panoramic views of the city and traditional Malay villages from many angles. 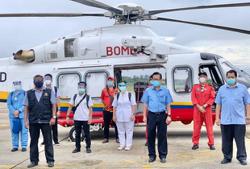