Cyberjaya no longer a dream city

CYBERJAYA was created by former prime minister Tun Dr Mahathir Mohamad as the country’s first intelligent city of the future.

The 30sq km specially designed township is meant to serve as the catalyst for the development of a science park forming the core part of the Malaysia Multimedia Super Corridor (MSC). 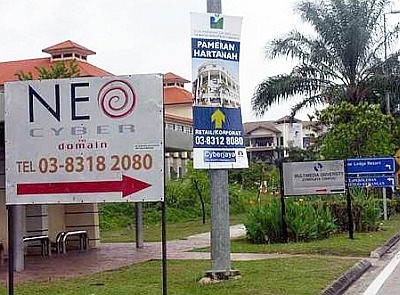 Self-help: Companies have resorted to putting up their own directional signs as the existing ones are outdated.

The high-tech cyber township, billed as the Silicon Valley of Malaysia, is located in the district of Sepang, about 50km south of Kuala Lumpur. It was officially opened by Dr Mahathir in May 1997.

The main development thrust is to provide a quantum jump for Cyberjaya to become a leading edge multimedia hub attracting world-class multimedia and IT companies.

This means the development of modern state-of-the-art integrated infrastructure and IT system, and the provision of an effective and efficient public transport system.

Today, 11 years on, the place, although the home of many commercial buildings, offices of MSC status companies and several universities, is not much different from an average Malaysian town. The original vision of a unique and sophisticated modern township is fast becoming faintly gloomy, with the haphazard parking and poor enforcement.

While the infrastructure, cyber laws, policies and practices tailored for the Cyberjaya population are in place, the large working community in the township has nothing but disdain for the Sepang Municipal Council’s (MPSp) town planning and maintenance efforts.

Even a foreign national has commented that Cyberjaya is no longer the city he knew when he first arrived there a few years ago.

“The city has turned out to be not so intelligent after all. There is no proper planning and it has become like any other city or town here. It has lost its uniqueness,’’ he said.

Even the emergency lanes have been converted into parking lots with parking bays marked on them.

Risky business: Buses have to stop in the middle of the road as the road shoulder hasbeen occupied by parking lots.

Although MPSp deputy president Abdul Razak Jaafar has vehemently denied that the council was involved in the matter, nothing has been done to ratify the situation.

Most drivers parked their cars along the roads to escape paying parking charges even if it means causing inconvenience to other motorists.

There is a park and ride service facility also known as The Shuttle, as part of the township’s transportation system.

It provides an alternative for the community to park their vehicles at designated car parks and use the buses to commute to most areas in Cyberjaya.

But, unfortunately, few people are using the service.

According to Razak, there is currently no charge imposed for the use of all buses and car parks.

“Parking for free and taking the shuttle not only saves times and money but also avoids the frustration of traffic congestion and the hassle of finding a parking spot in town,’’ he said.

“This situation does not augur well, especially when the government is trying to portray Cyberjaya as a city of the future. Most of the people here have started comparing Cyberjaya with other towns and cities where haphazard parking is a norm,’’ Mustaffa said.

There are 1,149 free parking bays at the MSC Innovation Centre, Cyberpark, Sports Arena and Cyberview and yet motorists do not want to use the facilities.

It is learnt that to overcome the parking problems, Suasa Efektif will be implementing a metered-parking system in designated areas beginning January next year.

The company will be introducing 222 parking bays and 10 parking machines along Jalan Technokrat and Persiaran APEC.

“It will be a pay and display system similar to those in Shah Alam and other parts of Selangor where our company is involved,’’ Mohd Mustaffa said.