WHEN two Light Rail Transit (LRT) trains collided at the Bukit Jalil station on Wednesday evening, many regular train commuters were shocked as they have always considered the train to be among the safest mode of transport.

Now, many of them are wondering just how safe it is to be a passenger on board a train.

“We often hear buses and cars involved in accidents, but now trains have accidents, too. It is quite scary to think about it,” Amirul Rahman said. The 20-year-old, who was on his way home to celebrate Hari Raya Aidilfitri, said he hoped the authorities would buck up on safety measures as many commuters like him travel in trains daily to the city.

“It is quite dangerous when the trains are driven at a fast speed and some passengers standing could lose their balance,” Nur Dayana said.

G. Nithya, 23, who commutes daily to a private university in Cheras from the Bukit Jalil station, said her mother had advised her to use other means of transport after reading news reports of the incident.

“She called me from Kedah and told me I should consider taking buses or taxis instead, as she fears for my safety,” she said.

Nithya, a final year biotech student, said it was fortunate that she had left for home in another train an hour earlier and so escaped the accident. 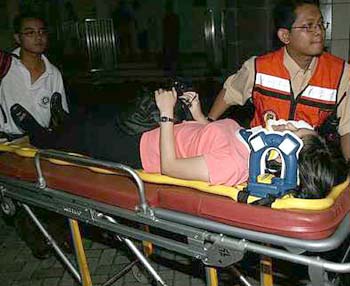 Quick action: An injured passenger beingsent to Hospital Universiti KebangsaanMalaysia after the crash on Wednesda y.

She said that taking trains was the most convenient for her as it was the cheapest mean of transport in the city.

“My university has a shuttle bus which stops at the Tasik Selatan station. Hence, it is convenient for me to get to class on time without hassle,” Nithya said.

She also said that checks on trains should be made regularly to ensure safety.

“Speeding and emergency breaks are quite often seen in trains and it is dangerous especially during peak hours,” Nithya said. 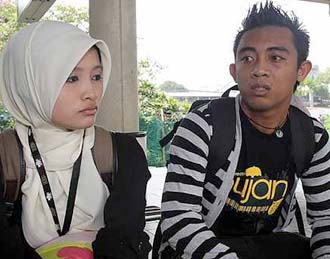 Buck up: Nur Dayana and Amirul Rahman said authorities concerned should improvetheir safety measures as many commuters like them commute in trains daily.

According to train commuters Leng Koon Fhuong and Tia Ai Ying, both 20, the train services should be closely monitored to ensure their safety.

“It involves the life of many people and things like this should not be taken lightly,” Leng said.

In Wednesday evening’s incident, about 300 people escaped serious injuries when a coach from Sungai Besi stopped suddenly about 200m from the train station before it was rammed into by another train from the rear on the same track.

Services at three stations - Sungei Besi, Bukit Jalil and Sri Petaling - were put to a halt after the 6.30pm incident.

Normal train service on the Ampang line resumed yesterday morning at 6am.

RapidKL general manager (communications) Ebi Azly Abdullah said the company had yet to find out the cause of the incident.

Ebi said that an interim report had been sent to the Transport Ministry while a team had also been appointed to conduct a full investigation on the incident.