People of all communities head for bargains at Ramadan bazaars

Pictures by A. MALEX YAHAYA 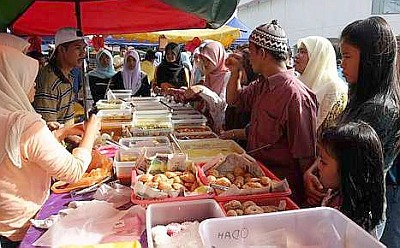 Myriad: More than 15 types of delicacies are sold at the bazaar.

DURING the fasting month in historic Malacca, locals from both Muslim and non-Muslim communities look forward to bargain-hunting for mouth-watering delicacies at the Ramadan bazaars.

They is truly a galore of exotic foods such satar, murtabak arab, kiuh pelita and badak berendam.

The atmosphere is one of glee with stall operators yelling for patrons to try their food, Hari Raya clothes and household items.

Among the popular spots is Peringgit bazaar in Taman Cempaka which has over 300 stalls offering food, clothing, carpets and household knick-knacks. Thirst quenchers: Besides local food, the bazaar offers a variety of drinks.

Despite the hot weather, operators arrive as early as 3.30pm to set up their stalls at lots allocated by the Malacca Historic City Council.

Operator Shukri Mahadi, 31, whose ayam percik stall is located at the bazaar’s entrance, said it was initially located in Jalan Hang Tuah.

“Owing to its popularity, it kept expanding and the council moved us here three years ago,” he said, adding that he had been selling the speciality for seven years.

Shukri, who runs a restaurant in Malim-Cheng, said the combination of spices used to marinate the chicken was a family secret. “My stall is at night markets in Bukit Baru, Lubok Emas and Air Molek. I look forward to the bazaar as I can sell on a daily basis for a month,” she said.

Her speciality is sweet kuih deram, which is offered only during Ramadan.

For 28-year-old technician Martin Tan from Cheng, the food is a welcome change for his afternoon tea and dinner. “It is my first visit and I realise the grilled chicken and fried mee are more fragrant than those from other shops,” he said.

His favourite delicacies are nasi lemak and murtabak.

Patron Mahani Azid, 25, a government assistant administrator, said she was surprised to see many stalls at the bazaar this year.

She felt adventurous and took home a packet of halal Penang kung fu chow with fried chicken and cakes.