By BLOGGED OUT NICOLE TAN

I AM driving. It is pouring heavily and my speedometer tells me that I am not going any faster than 10km per hour. It is 5.30pm on a Wednesday and I am stuck in a jam with two million other people on the roads in the Klang Valley and will probably be stuck here for another hour or so. Brilliant.

I turn on the radio, like every other driver around me is probably doing, to seek some entertainment to distract me from this traffic misery. A booming voice speaking immaculate English comes through the speakers, and I instantly recognise it.

Muhd Shazli Md Mukhtar, better known as Shaz Mukhtar, works from Monday to Friday every week, for only four hours daily, from 4pm to 8pm. And, guess what? His main job is, believe it or not, to talk!

Well, actually that is not entirely true.

Shaz, 25, also gets to meet different artistes every day for the interviews he carries out on the show; attends press conferences, product launches and concerts, and is invited to official launches of restaurants and movie premieres. Sounds like a dream job? Well, it certainly is for this XFresh FM radio announcer.

“It’s not so much about the lifestyle but the things that you get to do and experience by doing these things. It’s like one of those lifetime experiences,” Shaz said.

Tall, dark and handsome, Shaz delivers an articulate speech, especially in English. He was born in the United States and raised in France (yes, he speaks French, too), where he lived and studied for six years before returning to Malaysia to continue his degree course in Film Television & Broadcasting/PR at Limkokwing University of Creative Technology in Cyber-jaya.

Like most people in his line, Shaz loves his job. He started working as a DJ in January 2006 but has been with the company since 2001, working behind the scene, save for a one-year break in between.

On how he landed his dream job, Shaz said: “We all have to start somewhere and move up the ladder, and that’s what I’ve been doing the past years — gaining valuable experience in various departments in the workplace.” 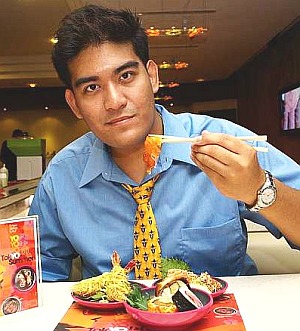 Yum!: Shaz enjoying his meal at his favourite restaurant, YO!sushi

Named “Chronicles of a Frenchie”, Shaz’s blog (http://shazfx.blogspot.com) documents many of his food entries, travel trips and his personal life. That means you will also get to read about the events he attends and the perks of being a radio announcer.

“I’ve been blogging since 2003, but I stopped for a year or two, then resumed it in 2005 and have continued till the present. I started off blogging with Blogspot and Xfresh’s online website blog system. I wanted something, somewhere I could put up photos of places I went with my friends, a platform where I could inform and keep my friends up to date with the events and happenings in my life,” Shaz said.

However, Shaz believes in keeping a blog personal and that the best way to market one’s blog is through word of mouth.

“One thing I don’t do is promote my blog by asking people to link me or any other means. A blog is a personal thing, but in my case, it’s not that personal any more ... even my clients read my blog!” Shaz admitted.

Despite working in the entertainment industry, he values the times he hangs out with his friends at mamak or coffee shops.

In his free time, Shaz has a passion for going online. From surfing the net, facebook-ing, chatting to playing online games, this DJ is a true born and bred Generation V – Internet generation.

Pop by his blog and get a taste of glam. You never know, it might just be your next step to fame.