FORMER international P. Maniam added another feather to his cap when he steered Selangor to the President’s Cup after almost 12 years.

Selangor, who last won the Cup in 1996, edged Perak 1-0 with the only goal coming from a Safiq Rahim header in the 42nd minute in the final played at the Shah Alam Stadium recently.

It was the 40-year-old Maniam’s second triumph as a coach in a national competition. In 2006, Maniam was the chief coach when Selangor won the Youth Cup. The following year, success eluded Maniam as Selangor completed their Youth Cup fixtures with a 100% record but lost to Bukit Jalil Sports School (BJSS) in the semi-finals. In jubilant mood: The Selangor players celebrating with thePresident’s Cup.

Maniam said he was proud to be associated with the Selangor players who gave their best throughout the season.

“The players played exceptionally well in the competition. But I have to admit that they were quite cautious in the final. After taking the lead, they opted to play defensive. This was something I had not expected from the players.

“Normally, they are an attacking team. But they managed to hold on to the slim lead and walked away as the winner,’’ said Maniam, who had played for the Red Giants from 1988-2000. 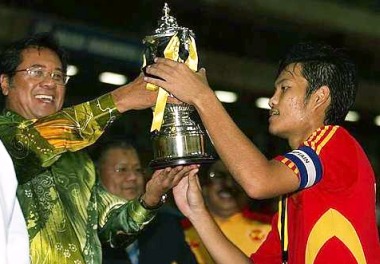 During his 12-year tenure with Selangor, Maniam, who hails from Kapar, Klang, had won the Malaysia Cup in 1995 and 1996. He was in the Selangor team who was the FA Cup champion in 1991.

He was also in the national team from 1991 to 1994 and played for Malaysia in two SEA Games and the 1994 Asian Games in Hiroshima.

His first coaching experience was in 2000 when he gathered a group of youngsters to form Pemuda Pandamaran Jaya (PPJ). PPJ played in the Division One and emerged as the champion. Maniam said the current players in the President’s Cup should be promoted to play for the Red Giants in the Super League.

“At least five of them have the capabilities to play in the much more competitive Super League. The others should be released to club sides like PKNS and Proton,’’ said Maniam.