Devotees all set for Wesak Day

THOUSANDS thronged Buddhist temples and associations in Penang to offer flowers and lotus candles as well as to help in the preparations for the Wesak Day float procession today.

At the Malaysian Buddhist Association at Burmah Road, devotees were streaming in from morning till late at night, said MBA secretary Lim Tien Phong. 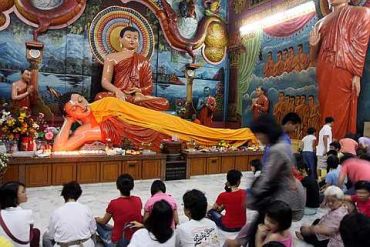 Monks chanting before the statue of Buddha at Mahindarama Buddhist Temple on the eve of Wesak Day.

“They began praying on Saturday after Lord Buddha’s statue was placed onto the Wesak Day celebration committee’s main procession float,” he said.

“Volunteers have also been working long hours for the past few days to decorate the floats,” he said. 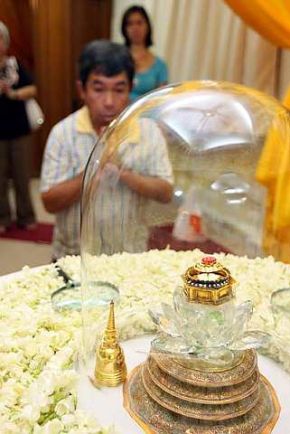 Devotees worshiping the Mahindarama Buddhist Temple's Sacred Relic of Sammasambuddha, which was displayed in conjunction with Wesak Day.

Sunday school teacher Oon Swee Hin, 44, said their float design was based on a Burmese myth.

“We have placed our Buddha statue from the shrine onto our float which is shaped like a flying chariot.

“Additional flowers were only added yesterday evening because they might wilt if they are under the hot sun for too long,” he said. 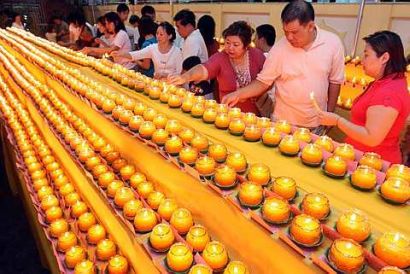 He said the float was painted by a Myanmar artist who was exposed to Burmese myths.

Like the Dhammikarama Burmese Buddhist Temple, the Wat Chaiyamangalaran Thai Buddhist Temple across the road was also packed with devotees and tourists. 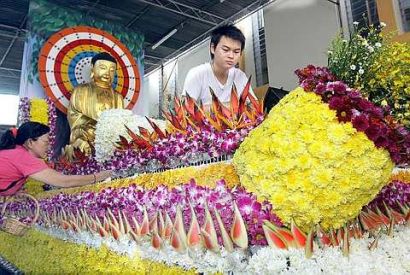 “The front portion of our float has a dragon head, normally found on royal boats, and aside from the Bud-dha statue, we have placed a statue of Longportaut, a famous monk.

“It took 10 volunteers three days to complete the float,” she said.

At the Mahindarama Buddhist Temple in Jalan Kampar, Penang, volunteers were busy arranging flowers on their floats.

The roads surrounding the temple were jammed with cars belonging to devotees. 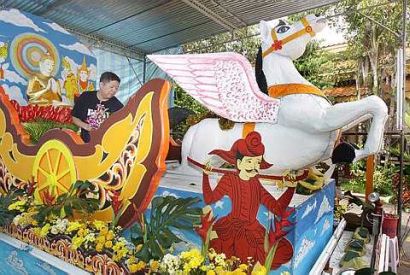 The Sri Lankan temple’s Wesak Day float would be the only float with monks on it, said Lim.

“Throughout the procession, monks will be sprinkling holy water and chanting prayers to bless those passing by,” he said.

Lim said the theme for this year’s celebrations is ‘Creating Harmonious Society With Compassion and Equality’.

Twenty-three floats, including the main float and two smaller floats, will take part in the two-hour procession from 7pm.