Indonesian cuisine fans will surely approve of this place

SHE left Sumatra nearly 10 years ago, however, Fungsiwaty's love for Indonesian food has not waned a bit.

Often her search for good food reminiscent of home left her dissatisfied and yearning for something better. So, one day she decided to abandon her search and don the apron herself. Why look further when she herself could whip up some of her childhood favourites?

And that's how Anggrek Kuring was born, a restaurant specialising, according to Fungsiwaty, authentic Indonesian cuisine with a slight inclination towards the Sundanese-Betawi style. Judging from the steady stream of customers the restaurant had been enjoying since it opened on Feb 1, Fungsiwaty has made the right move. She said her customers like the home-cooked taste her restaurant offered.

She added that Sundanese-Betawi style of cooking relied on simple ingredients.

“We use tauhu and plenty of vegetables with spices but it’s not hot since the pounded chilli is served separately,” said the 32-year-old owner. Not to be missed: Sambal Udang Petai is a delight for all spicyfood lovers.

The restaurant's ambience is distinctly Indonesian with tailor- made bamboo seats bearing handcarved motifs, wood panelling and bamboo lamps emanating a soft glow lending a cosy atmosphere to the place.

Traditional décors such as wayang-kulit paintings and Indonesian figurines grace the reception area. You could also buy Indonesian crafts and items such as hand-woven bags and purses from a designated area in the restaurant.

There are two VIP rooms upstairs that offer a unique dining experience, where you could dine the traditional way sitting cross-legged on the floor – termed as lesehan in Indonesian. However, this floor is only available for special functions or if the ground floor is full. 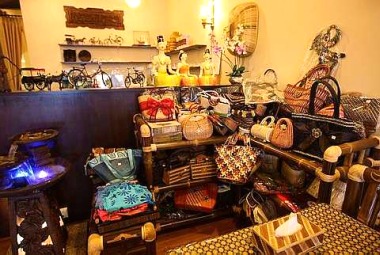 Dine and shop at the same time: Check out the interesting Indonesian craft, handbags and purses that makegood gifts.

Apart from Sundanese-Betawi dishes, Fungsiwaty said her menu is rather extensive with a variety of other dishes on offer.

One of her signature dishes is the Standing Fish, simply named so as the fish is cut and fried in a certain way that it remains erect when served!

There is also Gado-Gado, a salad with vegetables such as kangkung, long beans, bean sprouts, beancurd, and eggs and served with a peanut-based sauce.

The other highly recommended dishes are Ayam Goreng Kalasan and Ayam Panggang Khas, which are marinated with special spices from Indonesia, that according to Fungsiwaty shall remain a secret.

The dessert selections are equally good, too, and topping the list are Es Campur and Pisang Bakar Coklat.

The Es Campur is something like our Ice Kacang – shaved ice topped with cendol, jackfruit and coconut slices, cincau and avacado, finished with gula aren, the Indonesian version of gula melaka.

The Pisang Bakar Coklat is a melt-in-your-mouth experience. The bananas are first grilled over charcoal before being topped with chocolates that makes this a heavenly indulgence.