THE Kuala Lumpur City Hall (DBKL) wants proof from those claiming that its dog-catching unit are poisoning stray dogs to curb their population in the city.

“Show us proof! Either in photographs or the vehicle number plates and we will take action,'' an upset DBKL health department director Dr Zainol Ariffin Pawanchee said.

Zainol denied that the DBKL employed such cruel methods in its treatment of stray dogs.

“We have never resorted to such cruel methods to catch dogs. In fact the practice of shooting dogs, which was practised in the early 80s, has also been stopped,” he said. 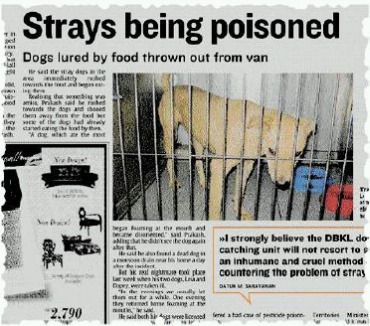 Flashback: The StarMetro report on April 26 about the dog poisonings.

“Today we use traps, wire loops and sedatives to catch the dogs. We work with the Department of Veterinary Services (DVS) and the SPCA to ensure that it's done properly,'' he said.

Zainol was commenting on a report in StarMetro that several people had seen food being thrown out to dogs from a DBKL van in several parts of the city.

According to StarMetro reader Prakash Singam, he first spotted food being thrown out to dogs from a DBKL van cruising around his neighbourhood early in the year.

Prakash said that after eating the food, the dogs would start foaming at the mouth and would become disoriented.

He said two of his dogs were also taken ill after returning home foaming at the mouth and was diagnosed with pesticide poisoning.

Zainol said that since Jan 15 this year, his department had received over 130 complaints from the public about stray dogs in their neighbourhoods.

“Our dog catching unit has caught some 659 strays while our contractors hired to catch strays have caught about 2,149 strays,” he said.

“Our methods are humane, In fact, the contractors are strictly told to bring in live dogs. We pay them RM22 per dog,'' Zainol said.

He said the DBKL had even offered the SPCA to be their panel operators.

Zainol said that the SPCA-DBKL low-cost Klinik Kembiri embarked on a spaying operation since the project kicked off in 2003.

He said that from 2003 to last year more than 8,000 cats and dogs had been spayed to prevent unwanted stray population.