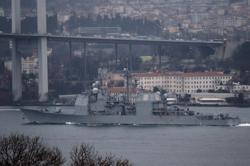 The gambus is a musical instrument played by plucking its strings with a plastic plectrum, much like the guitar.

It is primarily the lead melodic instrument in Malay music genres such as the Arabian-influenced zapin, masri and hamdolok as well as the Indian-inspired ghazal – all of which are normally performed at Malay weddings and religious festivals. 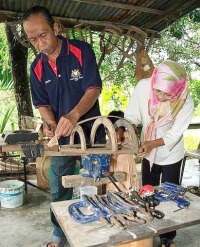 Filial help: Mohd Diah making a gambus with the help of his daughter Rohana at theirworkshop in Batu Pahat.

The Malay gambus is closely related to the gabbus of Zanzibar and Oman, the gabusi of the Comoros, the kabosa of Madagascar and the qabus of Saudi Arabia.

It is an adaptation of the Arabian oud, which was brought into Malaya by the Persians and Middle-Eastern traders of yore.

Through the passage of time, the instrument's gentle and soothing tones captured the hearts of the Malays, who adopted the instrument and improvised its playing techniques, making it their own music.

The instrument is made up of three components comprising the head, fingerboard and body using a combination of lightwood like the seraya, merawan, durian belanda and the jackfruit.

However, the body is carved from a single piece of wood. Much skill is needed to put together the combination of suitable wood. This is what gives the instrument its delicate and beautiful tone. 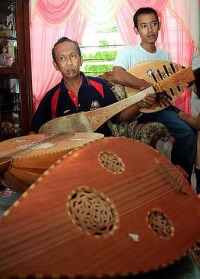 Father-son trade: Mohd Diah and his son Mohd Azwan showing some of the gambus made since 1999.

Strips of wood about 2.5cm wide are fitted over a wooden frame before they are carefully glued and left to dry. The head of the instrument is ornately carved and decorated and the holes richly ornamented.

Recently, at the invitation of Kraftangan Malaysia (Malaysian Handicraft Development Corporation), this writer had the opportunity of meeting one of the few traditional gambus craftsmen, the number of whom is dwindling in Malaysia.

Mohd Diah Ariffin, or Pak Mat as he is more popularly known, was eking out a living as a rubber tapper before embarking on making Malay traditional musical instruments on a full-time basis in 1999.

With the necessary equipment and machinery supplied by the corporation under its Craft Entrepreneur Development Programme, Pak Mat started a workshop, which is annexed to his house in Batu Pahat.

Being the meticulous craftsman that he is, Pak Mat puts in long hours at his workshop, handcrafting traditional musical instruments such as the gambus, gedombak, dol, maruas, kompang and angklung, which he supplies to the Johor Heritage Foundation.

The 67-year craftsman is very particular about the quality of his products and strives to ensure he has an adequate supply of raw materials available before committing himself to new orders. 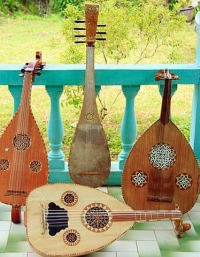 As a result of his exquisite craftsmanship and elaborate designs, there is a rising demand for Pak Mats products from handicraft aficionados throughout the nation, including of late, from Brunei.

Not surprisingly, monthly sales figures have been known to be in excess of RM10,000.

“I feel compelled to preserve this traditional heritage, especially now that age is catching up with my colleague in Senggarang and he is contemplating retiring from the business,” laments Pak Mat.

But luckily for Mohd Diah's family, his children have shown keen interest in carrying the torch of gambus craftsmanship to greater heights.

His success has enticed his son Mohd Azwan to take up the cudgels for gambus craftsmanship.

Currently a student at National Craft Institute, the 21-year old is pursuing a Diploma in Arts and Craftsmanship.

“Watching my father diligently build his craft into a successful business prompted me to test the waters. Eventually, I began to develop a talent for making gambus,” Azwan said.

Pak Mat gained further filial support when his 25-year-old daughter Rohana, a Universiti Pendidikan Sultan Idris graduate, joined hands with her father after learning the craft from her brother.

The gambus is a manifestation of Malay-Muslim tradition through adaptation, modification and interaction with Arabic customs, culture and traditions.

Today, it is a powerful symbol and expression of Malay identity and pride in their culture and religion.

With the solid commitment of his offspring, complemented by on-going support from Kraftangan Malaysia and Johor Heritage Foundation, Pak Mat rests assured about the survival of this Malaysian heritage. – Bernama 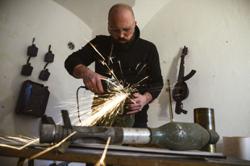