THE gradual conversion of homes into commercial lots and the expansion of existing business areas in Bangsar Zone have resulted in a lot of social problems in the neighbourhood,reports BAVANI M.

He moved into the place in 1972 and has been living there ever since.

It was an ideal location and convenient too as the area fronting his house had shops and restaurants.

Even then, traffic was always a little busy. But nothing like the current traffic nightmare, he said.

As Bangsar’s popularity grew as an ideal nightspot with a diverse range of pubs, restaurants and 24-hour mamak joints, more and more people started to converge there especially at night.

While the pubs would close at 2am, the 24-hour mamak restaurants would continue to pull in the crowd until the wee hours of the morning, attracting outsiders to the neighbourhood as well as intruders into homes.

The situation started creating a lot of problems for residents living in this affluent neighbourhood.

Residents whose homes are directly in front of the commercial areas have on numerous occasions protested against the excessive noise, smoke and traffic congestion brought upon by business owners and those who patronise their business premises.

To add to their woes, illegal motorcycle racers or Mat Rempit have apparently invaded the neighbourhood as well.

“You can see them racing along Jalan Maarof after 11pm during weekends. They cause such a commotion, revving their motorcycles and disturbing the peace of the neighbourhood,” said a disgruntled resident.

Lucky Garden resident Ramesh Nadarajah, who has been living in the area for 13 years, has witnessed more and more residential units being turned into commercial lots in the past couple of years.

“When I first moved here it was still rather quiet. But then we heard that there were plans to turn an empty plot of land in front our houses into bungalow lots.

“When we heard that they were planning to build restaurants many who lived here were not happy about that. Some of the residents got together and protested but in the end nothing could be done about it,” said Ramesh.

He said what irked residents about the restaurants were that they invaded other people’s privacy.

“Traffic is so chaotic that even the police and City Hall have been unable to control it. Snatch theft cases and robberies are on the rise, the noise is intolerable and the dust and smoke emitted from vehicles is choking,” Lee said.

He has since moved to the back room of his house to avoid the noise and smoke and the windows and sliding door of his home has been kept shut for years now.

Having a family gathering and party at his residence is no longer possible.

A rumour that plans are afoot to convert Jalan Maarof and Jalan Telawi into commercial lots has got residents riled up.

Lembah Pantai MP Datuk Seri Shahrizat Abdul Jalil had said during an exclusive interview with Star Metro recently that she had instructed Kuala Lumpur mayor Datuk Ruslin Hasan to look into the re-zoning of Jalan Maarof, Lorong Maarof and the Telawi area.

Shahrizat said she had met with the business people of the area who said that they wanted the area be converted into commercial lots.

“I have spoken to the mayor about this request as the areas are no longer tenable as residential homes. This is what the owners want as they say that it is no longer safe as the volume of traffic coming into the area is increasing day by day,'' she said.

All four residents associations in Zone Bangsar – Bangsar Baru, Bangsar Park, Lucky Garden, Bukit Bandaraya – and even the Bangsar Business Council are however against the idea.

Bangsar Baru RA president Datuk George Joseph said: “There are 55 houses along Jalan Telawi but 10 are operating as a business. Whether it is legal or illegal, the question now is City Hall should come up with a decision about the status of properties here.

“You can't have one rule for those who have connections and another for those who don't. Also for some of us here this is our only property and we have nowhere else to go,'' said George.

“Traffic and lack of parking are already major problems here. It's only going to get worse,'' he said.

“Also there should not be 24-hour mamak stalls. This is a residential area and it is not fair for those living here to have to deal with noise, drunks and intruders all day and night,'' added Ahmad Nordeen.

“Businesses should stop operating at 2am. This rule should be standardised and enforced on all business in Bangsar,'' added Ahmad Nordeen.

“It all boils down to enforcement,” said Quay. “We want better enforcement from the authorities. At the moment there is only selective enforcement,” Quay added. 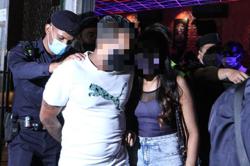