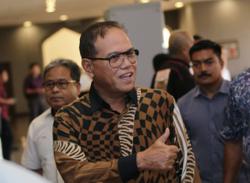 THOUSANDS of students gathered for the 11th Kalvi Yathirai at a Penang temple on Sunday with one purpose in mind.

They were there to reinforce their determination to do well in the UPSR, PMR, SPM and STPM examinations.

Accompanying them at the Arulmigu Sri Bala Thandayu-thapani temple were their parents who were there to give support.

Dressed in traditional costumes – the boys in jippa, long pants and vesti and the girls in salwaar kameez and saree – they sought blessings from Lord Muruga.

It was the first time that the social welfare organisation Sri Murugan Centre (SMC) held the event in Penang.SMC which provides weekend classes to Indian students nationwide had organised the event at Batu Caves in Selangor for the past 10 years.

The students climbed 297 steps to the temple after the two-hour yaagam conducted by chief priest Swami Brahmananda Saraswati of Dyana Ashram, Lunas and six other priests.

They also poured holy water and flower petals from chembu (small vessels) on the idol of Lord Muruga.

After that, they attended a 15-minute motivation talk.

Besides Penangites, Year Six pupil Sooriyah Sambath, 12, from Ipoh, was there with her parents and two younger sisters.

The family is on a vegetarian diet until his examination is over next month.

“A vegetarian diet will enable me to have a clear mind,” said Sooriyah who aspires to be an accountant.

His mother Selva Rani Sambath, 45, plans to clean the house altar after the event while the father Sambath Suppiah, 45, wanted to string mango leaves in front of the house in hope that the daughter will do well in her examination.

A Year Six student from Sungai Petani, Kumanan Mogan, 12, set out on the journey with his mother and some 100 people in three buses at 2am reaching Penang three hours later.

“I am happy to see so many friends in Penang and will definitely study hard to become a pilot like my elder brother,” said Kumanan.

SMC director Datuk Dr M. Thambirajah said the event was to mark the partnership forged among the students, parents and SMC.

He said a study revealed that between 1982 and 1985, only 4,000 Indian students were admitted to universities.

“However, since SMC started conducting the event 10 years ago, we have more students entering local and overseas universities,” he said.

Participants were also given free breakfast and lunch.