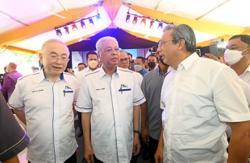 "We are optimistic that TBM1 is able to meet the engineering challenges and geological conditions when tunnelling through the hilly and mountainous terrain of the Titiwangsa Range.

"The teamwork and dedication at all levels of the ECRL project will pave the way for tunnel breakthrough at Genting Tunnel to be achieved as per schedule," said the Ayer Hitam MP during the launch event at the Bukit Tinggi portal of the tunnel, located on the Pahang side, on Thursday (June 23).

TBM1 is first of two TBMs that will be used to excavate the twin-bore 16.39km Genting Tunnel, while TBM2, the second machine, will be fully reassembled and tested before starting work by the end of the year.

With an average excavation speed ranging from 400m and 600m per month, TBM1 is expected to take approximately 2.5 to three years to dig the 16.39km Genting Tunnel, which is set to be the longest rail tunnel in South East Asia.

Dr Wee said the Genting Tunnel excavation is a major step for the ECRL project, which is gearing towards peak construction in 2023, with 23,000 workers, comprising 70% locals, expected to work on this critical infrastructure.

He added that the Genting Tunnel plays a pivotal role in the ECRL network as it will complete the much-needed "landbridge" for seamless freight movements between Kuantan Port and Port Klang, as well as link commuters from East Coast states to the Gombak Integrated Transport Terminal (ITT Gombak) in Selangor.

Dr Wee explained that the ECRL project is happening concurrently at three sections – A, B, C – involving 300 sites along the 665km alignment.

Dr Wee said Section C involves a 172km stretch from Mentakab to Port Klang, and there will be seven stations – Temerloh, Bentong, both in Pahang, as well as five in Selangor - ITT Gombak, Serendah Baru, Puncak Alam, Kapar, and Jalan Kastam.

The ECRL project, scheduled for completion in December 2026, will link Kelantan, Terengganu and Pahang to the Klang Valley, and is projected to derive 70% of its revenue from freight services, with the rest from passenger services when operational in January 2027.