LABUAN (Bernama): A 70-year-old woman who had been stranded for 32 years in Sarawak was able to return and reunite with her family here on Saturday (Feb 27) thanks to a mercy operation.

The woman - identified as Salmah Adeh - left Labuan in search of a better income in Sarawak but wound up being homeless in Sibu when she lost her Malaysian identity card and cash in a snatch theft incident.

During her stay in Sibu, she found work with a market vendor at the Sibu central market and had a place to take shelter, but eventually her employer passed away and she was left homeless.

She then began helping other vegetable vendors in the market to make ends meet, and slept on the footpath for over 20 years.

On Jan 8 this year, Salmah was taken to the Sibu Hospital for treatment after she was found in a weakened state by a good Samaritan.

Bernama’s Sibu-based correspondent then highlighted the woman’s plight in February and subsequently found her nephew Zamain Ma’in in Labuan but efforts to bring her back were stalled due to the inter-state travel ban.

However, non-governmental organisation Persatuan Amal Kebajikan Insan Sarawak and the social welfare departments in Sibu and Lawas then initiated efforts to send her back home and reunite with her family and only daughter Noredah Saman, who is now 47-years-old.

Her family members in Labuan had made all efforts to trace her but to no avail.

"We must also thank the medical team from the Labuan Fire and Rescue Department who had given medical support to Makcik Salmah, and the personnel from the MMEA and Labuan Marine Police team for the mercy operation, ” said Labuan Natural Disaster Management Committee Rithuan Ismail.

Noredah, meanwhile, confirmed that she was in Form Three when her mother left for Sarawak. - Bernama 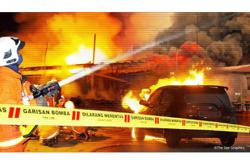