PETALING JAYA: The Royal Pahang Durian Group (RPD) has signed two shareholders’ agreements with Perbadanan Kemajuan Pertanian Negeri Pahang (PKPP) to facilitate its entry into large scale durian processing and its participation in the legalisation of encroached farming in the district of Raub, Pahang.

In a statement yesterday, the RDP said the first agreement relates to the subscription of shares in Ample Fruits Sdn Bhd, with Royal Pahang Produce Sdn Bhd taking 60% of the equity and PKPP the remaining 40%.

“Under the agreement, RPDP-PKPP will invest about RM40mil to build, own and operate a state of the art durian processing facility with an initial freezing capacity of 3,500 metric tons per-month located in Raub.”

When completed, this facility will be by far the largest durian processing facility (frozen whole fruit, pulp and paste) in Malaysia, RDP said.

“It will feature the latest cryogenic freezing technology, highly-automated processing lines, dedicated R&D capabilities and 7,000 tonnes of storage. The plant will be in compliance with the latest export protocols and health and food safety hazard control certifications.”

“Under this agreement, both parties will participate in the legalisation exercise involving initially no less than 7,000 acres in the district of Raub, which have been affected by encroached farming,” said RDP.

In July 2019, RDP was granted the mandate and approval by the Pahang State Government, through the Perbadanan Setiausaha Negeri Pahang (PSK), to undertake and implement its proposal to address the issue of illegal farming in the district of Raub, and to curb further encroachment.

“RPDR-PKPP had also recently submitted some revision of terms to PSK and in anticipation of PSK’s reply, the parties yesterday formalised their shareholders agreement. A further detailed announcement will be made upon official reply by PSK,” said RDP.

Under the legalisation scheme, illegal farmers will be required to cease further land encroachment.

“They are also required to register for Malaysian Good Agricultural Practice certification and comply with environmental regulations, where applicable. In return, they would be allowed to continue cultivating the areas with an agreement to sell their produce through RPD.” 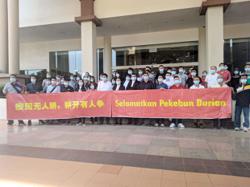