A closer look at the straight climb from the top

Bukit Tabur is a prominent hill in Selangor, with peaks that can be traversed via four trails – East, West, Far East and the lesser-known Tabur Extreme.

The 14km-long and 200m-wide dike is part of the Klang Gates Quartz Ridge, frequented by hikers from various starting points along the middle 5km span that lies behind Taman Melawati all the way to Zoo Negara.

Hikers enjoying the incredible views of the Klang Gates Dam

The Tabur Far East trail is about 2km long, and the highest point stands at 357m above sea level. A return journey takes about one-and-a-half to two hours at a moderate pace.

The trailhead is located at a construction site on Jalan L5. From the entrance, we head up to the hills on our left, away from the construction activity, walking on a dirt road and rocky slopes.

At the foot of the hills, we were greeted by barking dogs, confirming that we were on the correct path.

Moving right, away from the barking dogs, a short climb led to a pleasant surprise – a secret garden filled with fruit trees. The grass lawn then slopes upwards gently for about 500m, offering a 360° view of Kemensah, Kuala Lumpur city and the hills up ahead. Midway, we passed a gardener who has been maintaining the fruit orchard.

At the end of the well-tended grass, the terrain changed as we headed up the forest path with some intense spots. We encountered steep sections crisscrossed by tree roots. After 10 minutes of rigorous climbing, we reached the saddle of the Klang Gates Quartz Ridge between Tabur Far East and Tabur Extreme.

A healthy mossy patch at the top of the ridge

At 289m, this is a good spot for a short rest before making the assault on Far East, on the left. The ascent starts easy, leading us to the base of a large rock. Giving way to hikers coming down, we were told that the peak was just 10 minutes away.

Getting to the peak involved sidling up and left, along a rock wall with a 30m drop, followed immediately by a near vertical climb. Aided by the rope, we hugged the rock wall and inched our way across the smooth surface onto a wider ledge.

Then came a straight-up climb of about 5m. With limited crevices for hand and footholds, we used the rope to haul ourselves up.

Thereafter, the trail turned inwards, climbing at a more manageable gradient. Rounding a final sharp corner took us to the top of the ridge, opening a 270° vista of Tabur’s many peaks.

Edging along the rock wall with the help of ropes.

The 357m ridge is fairly wide, with several picnic-sized spots ideal for a snack and drinks. To the north, the many fingers of the Klang Gates dam can be seen from the two viewing spots at either end.

From our vantage point at the western-most tip of Far East, we could see hikers making their way up the more popular Tabur East, which is accessed from a different starting point. We followed west along the trail for a bit and discovered some beautiful mossy patches.

Having had our fill of the mountains encircling the dam, we headed down for our next challenge – Tabur Extreme. But first, we had two tricky sections to get through. For the vertical descent, we turned and faced the rock, going down backwards. Though it was slow going at the rock wall, we all made it down safely. 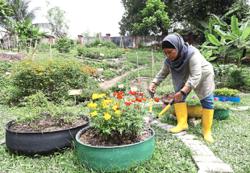 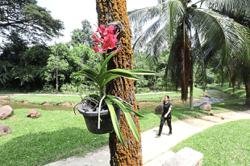 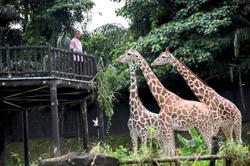