Stories from behind the scenes

WHEN I was back in Kuala Lumpur recently, my mum mentioned that our regular newspaperman had asked of my late father.

When he found out what happened, he immediately offered his condolences and said he would have come to the wake if he had known then.

He has been delivering the papers to us for as long as I remember, first as someone’s employee before he took over the business and the route.

To him, I was always “Ah Boy”, like how our former rotiman and the mamak shop uncle down the road used to call me.

As I grew older, I would bump into all these people less.

I was never awake early enough to see them whiz by, and I was always out in the evenings.

Dad, however, enjoyed conversations with them and when he retired every one of them – the newspaperman, the garbage collectors, the aunty sweeping the streets, the domestic workers from our street and the security guards patrolling our neighbourhood – became his “friends”.

Some days over dinner, he would tell us stories from his conversations with them, but as his dementia grew worse, there was less to tell.

Part of me wishes that I had paid more attention to those dinnertime conversations.

I have always loved stories – whether reading, listening or telling them – and it is one of the reasons why I ventured into the world of journalism more than 20 years ago.

It is also why each year since 2013, between National Day and Malaysia Day, I would embark on a small project to collect and tell Malaysian stories in an effort to spread some positivity, and to bring people together through our shared experiences.

Last year, during our #seedingMYhope project, one of my youth collaborators Brandon Lipaul produced a short film featuring him going up to the people who work behind the scenes to keep our city going – street cleaners, nurses and more – with a flower as a token of appreciation.

Taking that idea forward, this year for our project dubbed #KLectingStories, Brandon together with seven other youth collaborators from last year, have been going around Kuala Lumpur talking to our fellow KL-ites, who so often look as if they are working behind the scenes.

From the newspaperman to firemen to train drivers, these are all people who I feel often get taken for granted, overlooked and not thought about although each of them contribute to the well-being and the progress of our city as much as we do.

I have written many times in this column about how the only way for a country to move forward is not only for people to come together, but to do that with the realisation that we all play a part, whether we know it or not.

Often, the roles we play are not obvious but I truly believe that it is the people who make a city – or country – what it is.

If we look beyond politics and governance, we will see that in our day-to-day lives, it is us – the people, the public – who make things happen.

With #KLectingStories, I am hoping to encourage not just my collaborators but also each and every one of you, to have a short chat with our fellow citizens who work behind the scenes.

What stories do they have about our daily lives that we might never have thought about or heard before? What do they see about our lives or our city from their respective vantage points that we don’t have the privilege of seeing?

In this fast-paced world we live in, it is easy to just get on with our individualistic lives. I for one am guilty of this.

Perhaps that is why I love the idea of stories so much because not only does it expand your mind and allow you to enter worlds you have never imagined before, it also connects people – the storytellers and the ones listening – together.

In a diverse society like ours, many of these stories will be different but they might also sound very similar.

This is the beauty of having diversity which forms our social fabric, and so we must always remember that it is these shared experiences that show us how much more similar we are than different.

Content from #KLectingStories will be on display at the Tea House at APW in Jalan Riong in Bangsar from Sept 15 to 18 as part of APW celebrates Malaysia Day (www.facebook.com/apwbangsar).

Find out more about the stories, and how you can contribute, at www.KLectingStories.com.

Niki is a PhD researcher at The University of Nottingham, UK. Connect with him online at www.nikicheong.com/fb. 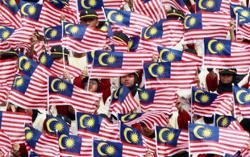